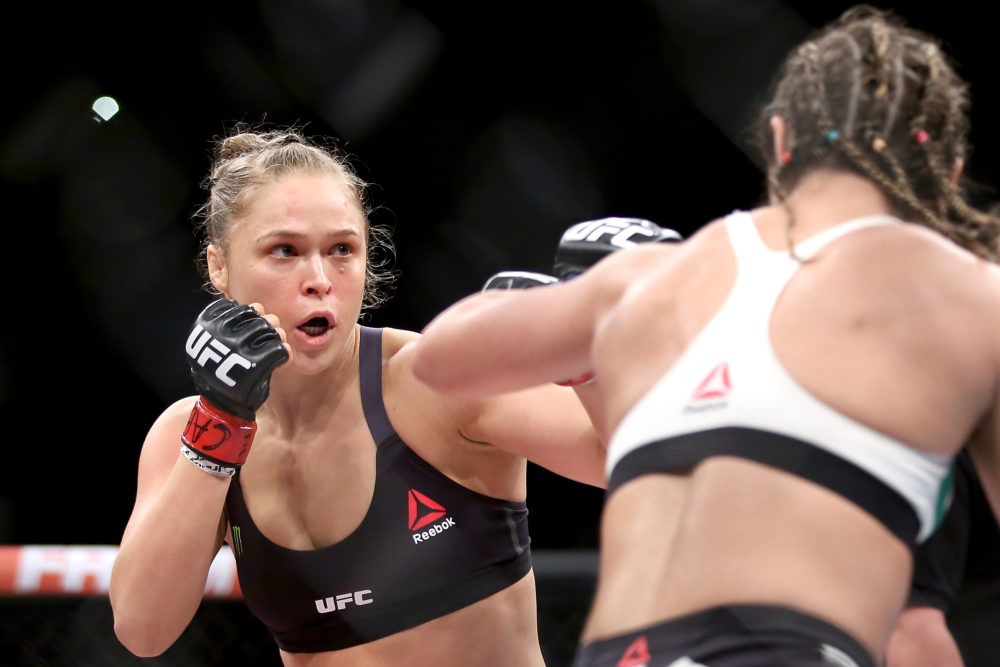 World Wrestling Entertainment looks set to add a major star and one recently associated with the UFC. That would be Ronda Rousey (seen above fighting Bethe Correia in August 2015), who appeared at a WWE event in September and seemed to challenge prominent wrestler Charlotte Flair. USA Today‘s Martin Rogers reported Wednesday that Rousey’s move “appears to be imminent:”

Ronda Rousey’s Ultimate Fighting Championship career effectively ended last year, when she was beaten by Amanda Nunes inside 48 seconds. Now it is approaching its formal conclusion, with Rousey moving closer to throwing herself into a new adventure with World Wrestling Entertainment.

Two people close to Rousey told USA TODAY Sports that she is finalizing details of her move to WWE. The people requested anonymity because the switch has not been announced.

However, the evidence of Rousey’s career change has been mounting for a while. Rousey was at a WWE show in September and watched her close friend Shayna Baszler, a former mixed martial artist now making waves with the WWE. During the event, Rousey was caught in a stare down with leading women’s wrestler Charlotte Flair, in which Rousey issued a challenge: “You name the time, you name the place.”

That led to speculation that an official appearance is imminent, perhaps at Wrestlemania 34 in New Orleans on April 8.

This isn’t really Rousey leaving the UFC for WWE, as many have figured her MMA career was over since that 48-second loss last December 31. And even UFC president Dana White told MMA Junkie recently he didn’t want Rousey making a UFC comeback:

But it’s still interesting to see a high-profile talent going from being associated with the UFC to being associated with WWE, as those organizations are likely to be in competition for broadcast rights soon. In fact, Sports Business Journal‘s report last month of broadcasters offering the UFC only $200 million annually,  nowhere near the $450 million they wanted in a media rights deal, cited WWE as a factor (along with others, such as uncertainty about the AT&T-Time Warner merger) in the low offers to the UFC:

Complicating matters is the fact that WWE’s rights are up in the fall of 2019. WWE’s scripted programming and audience makeup is much different than the UFC’s. But a channel like FS1 could look at WWE as acceptable replacement programming in case it loses UFC rights.

Adding a crossover star like Rousey could boost WWE. Rousey has been in a number of TV and movie projects, including The Expendables 3 and Fast 7, plus ESPN The Magazine‘s Body Issue, Maxim, and Sports Illustrated‘s Swimsuit Issue, and she has regularly appeared on shows like Ellen and even hosted Saturday Night Live. Even after her loss to Nunes, she’s still one of the most widely-known talents from the UFC world. The value of WWE rights isn’t generally about one performer, and there are questions about how Rousey will be received by a wrestling audience, but she certainly would seem to have at least the potential of bringing in some new fans.

It’s also worth pondering if Rousey’s departure from the UFC is perhaps part of the reason they haven’t been able to get the offers they were looking for. As with the WWE, media rights aren’t all about one fighter, but Rousey was one of the UFC’s best-known athletes when that presentation was made in the summer of 2016. Now, it’s quite possible that didn’t directly factor in Rousey much, as this was about lower-tier broadcast fights rather than the better PPV fights she would have likely been in, but there was still maybe the idea of her showing up on some broadcast properties from time to time. And she certainly was one of the most mainstream UFC stars.

Overall, if this move comes to fruition, it’s not so much a direct loss for the UFC given the likelihood Rousey wasn’t returning to the cage for them. However, it could be an indirect loss in terms of building up WWE, one of their biggest competitors (especially with both organizations’ media rights coming up soon). Adding Rousey carries risks, particularly in how hardcore wrestling fans will receive her, but it’s also a growth opportunity for WWE and a chance to possibly extend their brand further. And with their broadcast rights coming up soon, it’s hard to think of a better time to do that.