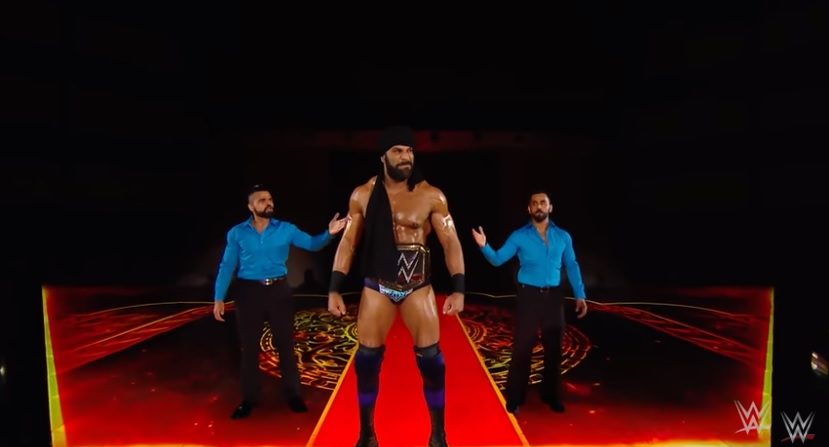 When it comes to professional wrestling and achievements in diversity, the bar is so low that you’d think it might be impossible not to clear it in 2018. And yet, only in the last few years has it really felt as though WWE has really joined us in the 21st Century and started not only showcasing diverse talent but pushing them to be the champions and faces of their company.

That opening caveat probably deserves a secondary caveat in that we’re also coming off a year in which the person who was WWE champion for most of it, Indo-Canadian wrestler Jinder Mahal, was also forced to play the “evil foreigner” trope that has maligned the way pro wrestling has handled performers from diverse backgrounds since it began. The sport has always been steeped in “other-ness” and it’s inability to leave that racist trope (and many other tropes) in the past is a large part of the reason many people refuse to take it seriously as an art form or entertainment.

The assumption has always been that so long as Vince McMahon is in charge, these basic tenets of pro wrestling’s carnie days will continue. He’s proven time and time again that while he is malleable to many things, he is also tied to the era of his and wrestling’s past. He remembers a time when no one would have batted an eyelash as “the brown guy is bad because he’s the brown guy” and since it worked then it’ll probably work now. There’s a reason this guy is trying to start a “dog whistle” football league in 2018.

However, we’ve also seen others in the company start to gain power and figure out how to push WWE forward in recent years. HHH and Stephanie McMahon are the faces of this “bold” new era. It’s one that values women wrestlers for their athleticism and strength instead of basing everything on sex appeal. It’s a regime that keeps pushing the company into new territories around the globe and inviting the world’s best performers to work with them. And it’s a promotion that has, over the last few years, really started putting money where it’s mouth is when it comes to making people of color and people from outside of North America the faces of their company.

The 2018 Royal Rumble might have been a kind-of culmination of that recent change. The men’s Rumble match was won by Shinsuke Nakamura, a flamboyant Japanese wrestler whose rock-star vibe and strong-style moves are at odds with the chiseled beefcake mold that many WWE stars have been made in. The inaugural women’s Rumble match was won, as expected, by Asuka, a Japanese wrestler who has never been defeated in an NXT or WWE ring and currently carries a Goldberg-like aura of invincibility. The two have now secured a championship title match at the upcoming Wrestlemania and it’s a near-certainty that one, if not both of them, will carry a world title soon.

As a storytelling marker, the Royal Rumble as a marker has become about anointing its winners. It’s meant to signal to the audience, “this person is important.” Sometimes it’s a wrestler we already knew was important. When Randy Orton won it last year, it was about reestablishing his place in the pecking order. Other times, such as this year, it’s about signaling to the masses that you will need to know this person’s name moving forward because they’re going to be among the faces of our company.

For both of those winners to be Japanese, for a company that has long stuck to tired tropes about race and origin, is a big deal. And then when you take a step back and look around, you see just how much things have changed around the WWE.

While the current slate of singles champions is mostly made up of the usual suspects (and skin colors), it hasn’t been that way too often. Indo-Canadian Jinder Mahal carried the WWE Title for much of 2017. Naomi became one of the company’s few African-American wrestlers to earn the WWE Women’s Title earlier in the year. African-American wrestler Sasha Banks seems to always be in the Raw Women’s Title hunt, briefly winning it last month. Cruiserweight champions throughout 2017 included Japanese wrestler Akira Tozawa and Mexican-American wrestler Kalisto. Roman Reigns, an American Samoan wrestler who is arguably the face of the company, held the U.S. Title and Intercontinental Title at various points throughout the year.

On the Tag Team front, the Smackdown division was basically put on the backs of The Usos, a pair of American Samoan brothers, and The New Day, a trio of African-American wrestlers, for the entirety of 2017. Head down to NXT, the company’s “minor league” promotion, and it’s more of the same. The NXT Championship is currently held by Mexican wrestler Andrade “Cien” Almas and was previously held by Nakamura at the beginning of the year. The NXT Women’s Championship, which belonged to Asuka for most of 2016 and 2017, is now held by African-American wrestler Ember Moon.

For many longtime wrestling fans, they might not look at that rundown and think much of it. Tag titles and secondary titles have long been the domain of POC wrestlers and foreign-born wrestlers who could only rose so high in the industry. But now some of those same wrestlers who might have seen an Intercontinental Title or Tag Team Title as their ceiling are finding out that there is no ceiling any longer. Had Nakamura or Asuka come up in the 1990s or even the 2000s, it’s unlikely they ever would have escaped the mid-card, at least not without the perception that they needed a manager or the evil foreigner gimmick. That the both of them are at the top of the company as “good guys” allowed to lean into their natural charisma is something of a miracle considering where the industry, and the WWE, were not too long ago.

There’s still plenty of work to be done on this front (we’re still only four months removed from a particularly racist promo involving both Mahal and Nakamura), but it’s satisfying to see what’s possible when pro wrestling stops putting people in boxes based on their skin color and place of origin.