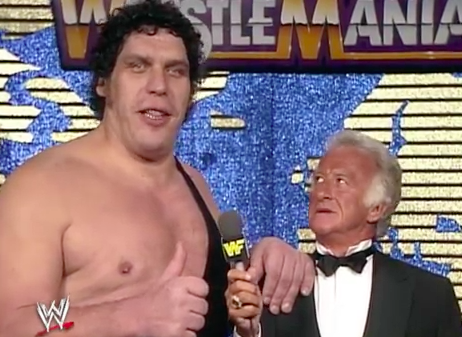 There has been a lot of smoke but no fire with Andre the Giant projects of late. For wrestling fans clamoring for a film on wrestling legend, it looks like you’re now in luck, as Awful Announcing has learned the rumored HBO documentary is set to move forward with Jason Hehir directing.

If you recall back in November, it was reported by Page Six that Bill Simmons was circling this project with HBO and Jonathan Hock was set to direct. Hock denied involvement and knowledge of the project and it’s been crickets ever since. Last month reports came out of another Andre The Giant project, a feature film biopic, based on a graphic novel biography on the wrestler. With no writer or director attached to that project, like many Hollywood projects this may not ever advance to production.

But the good news is the documentary project is back on track under the stewardship of one of the preeminent directors in the sports documentary space – Jason Hehir.

Hehir has directed multiple 30 for 30s, including most recently The ’85 Bears, Bernie and Ernie, The Fab Five, and the unaired Down In The Valley. Hehir’s track record with ESPN has been very impressive, as I believe he’s the only four-time director within the 30 for 30 series. Also bolstering his resume for this project is the fact he’s worked on a wrestling documentary in Finding Hulk Hogan (although in a limited consulting role) in addition to various MMA and boxing projects.

That ends our “what we know” portion as we don’t have any insight into when this will air and when it will formally be announced, as well as the WWE’s involvement with the film. Both HBO and Hehir declined comment.

Now, onto the conjecture portion of this article.

Again: Talked to Jon Hock today of @HockFilms: He has not talked to HBO or Bill Simmons about any Andre The Giant project.

We’re unsure if Hock was ever formally or informally involved with this project (he gave a very firm denial). It may have been bad or premature reporting by Page Six. One plausible explanation is the Page Six reporter was told something along the lines of “Simmons wants to get a multiple installment 30 for 30 director with the initials J.H.” and they neglected to realize Hehir and Hock were both possibilities. That said, we’re told Hehir being attached to the film is a more recent development. A more plausible explanation, though, points to the complicated politics in play for this project.

First, doing this documentary without the WWE’s assistance, permission, and blessing is essentially a non-starter as some type of arrangement needs to be made to use the WWE footage. I’m told multiple directors and networks have tried to win over the WWE to sign on, but despite some traction, it’s never happened. We’re told that back November the WWE was not yet fully on board with the Simmons HBO project.

Before 30 for 30, the sports documentary space was pretty thin outside of HBO’s output of four films a year done by their internal team. Simmons was VERY vocal bemoaning HBO’s dominance when 30 for 30 launched in 2009.

ESPN now owns the space to the point where people tell me to watch “a great 30 for 30” when the sports documentary in question is not an ESPN 30 for 30. It’s become the Kleenex-like generic term for sports documentaries, to the chagrin of anyone not at ESPN. Meanwhile HBO has shuttered their in-house department, although Simmons moving to his former documentary nemesis offers a beacon of hope that maybe HBO will reemerge from sports documentary producing hibernation (their output has gone from ~4 year to 1-2 year over the last 6-7 years).

30 for 30 has more or less become a well-oiled machine, with ESPN tabbing external directors/producers to tackle projects they are keen on (it’s been said they’ve been green-lighting less inbound pitches). Given ESPN’s commitment to the genre and now seemingly growing output of installments a year (as well as the slim amount of projects outside of ESPN, much of which is done by the former HBO folks), being in the rotation of 30 for 30 directors like Hehir and Hock is a pretty good reliable gig, to the point where you could see why Hock was aggressive in denying he was working on something else with the recently departed Simmons as most of the headlines declared Hock had been “poached”.

Given the animosity between ESPN and Simmons, it’s not a stretch of the imagination that any 30 for 30 regular jumping the fence to HBO with Simmons was going to put their future ability to make 30 for 30s with dependable frequency in jeopardy, especially if the individual documentaries were something ESPN had interest in doing as well. With that in mind, at the time of the November announcement, Hehir was likely not attached to the Andre The Giant project as he was still working on The ’85 Bears documentary that aired in February and still hoping for a resolution to air Down In The Valley which was pulled from airing the month before.

Once The ’85 Bears aired and it became clear that Down In The Valley would likely never air, this likely opened up the door for Simmons and HBO to finalize arrangements to get both the WWE and Hehir signed on. Essentially, with Simmons’ big name and autonomy at HBO, along with any dissatisfaction of having made a quality documentary that ended up being shelved, Hehir may have found himself in the unique position to risk leaving the good graces and security of ESPN and 30 for 30 to tackle this project. It will certainly be interesting to see if Hehir’s next few projects are with HBO and Simmons, or perhaps his track record at ESPN is enough to trump any hurt feelings about working with a different network and Simmons. Either way, very few filmmakers have of late been able to go back and forth. Some, like Peter Berg and Mike Tollin have worked for both networks, but not since the Simmons departure.

This is admittedly a lot of conjecture and inside baseball on how we got here. We won’t know more about when the film will air, its length, and title for a while, as I imagine HBO and Simmons would prefer to share the news in a more splashy unveiling (perhaps Simmons’ show on HBO or a companion Andre The Giant article on The Ringer,) as opposed to just coughing it up to this humble site.

While the Bill Simmons vs. ESPN narrative has largely been bitter and involved petty name-calling along with the demise of Grantland, perhaps the silver lining in the very public divorce will be healthy competition on the documentary front.