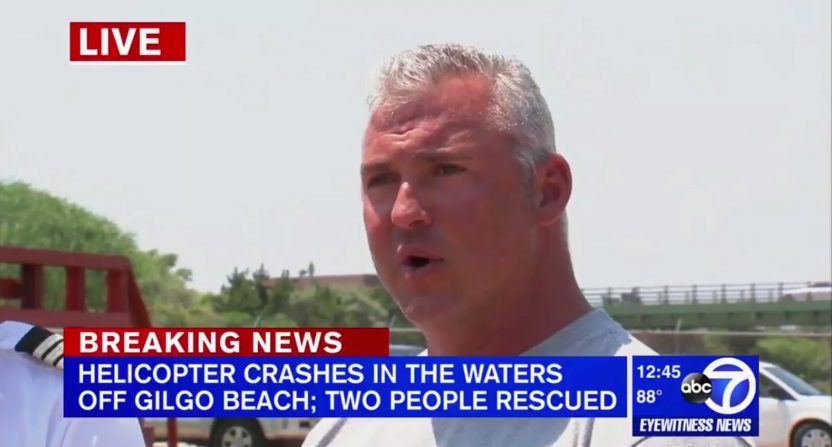 According to a local news report from WABC-7, WWE minority owner and on-screen authority figure Shane McMahon was rescued safely from the Atlantic Ocean off the coast of Long Island.

There was an apparent mechanical malfunction shortly after takeoff, and the pilot of the aircraft was forced to perform an emergency landing in the water. Here’s Shane discussing it, and answering a disinterested question about his identity in the process:

I'd like to thank the man upstairs for looking out this morning & thanks to pilot Mario, Suffolk Co. Marine Bureau & Fire Island Coast Guard

Via the initial WABC report:

The FAA says the Robinson R-44 helicopter with two aboard landed on its pontoon skids just before 10:30 a.m. Neither Shane McMahon or pilot Mario Regtien was injured.

“We heard some noise, and it became very clear to me that I could no longer continue flying the helicopter,” Regtien said. “So I decided to do an auto-rotation landing in the water.”

“It’s very unsettling when all the sudden you have something happen,” McMahon said. “You hear a bang, and then you start saying, ‘We’re going to do an emergency landing in the water.’ So yes, it was very unnerving. But again, Mario was super calm, which made me super calm. And we landed perfectly.”

The Coast Guard was reportedly on the scene immediately, and from the pictures, it appears the helicopter was indeed equipped with pontoons that enabled a sea landing. McMahon seems incredibly calm, but then he’s not exactly new to surviving potentially dangerous falls from a great height.

Fortunately everything ended well so we can make these references. (It’s not out of the realm of possibility that WWE even attempts to work this into an angle going forward, although it does seem unlikely.)

Kudos to the pilot, who at the very least deserves some front row tickets the next time WWE is back in New York.