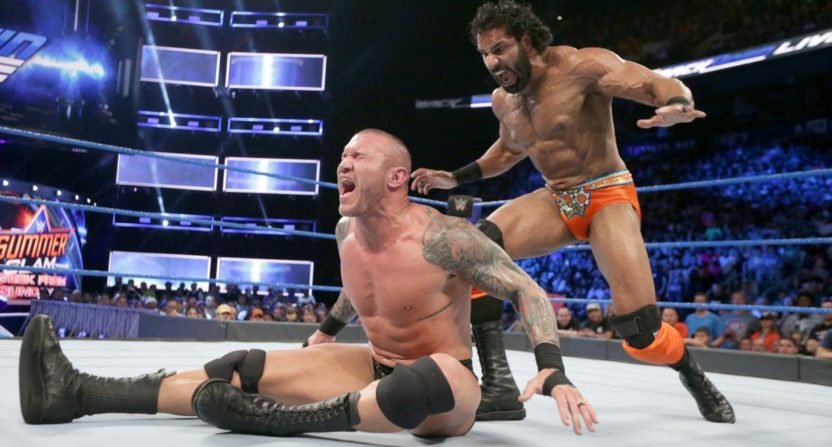 With John Canton still “on assignment” in Toronto, enjoying Raw and Smackdown live in The 6, I’m filling in once again on review duties. With SummerSlam less than two weeks away, the build for that show and the matches involving Smackdown performers was given a heavy push.

There was a little more talking than we’ve seen on Smackdown Live recently. (For instance, we got a sit-down interview with Shinsuke Nakamura, which really doesn’t make for great TV, rather than him in the ring.) More matches would have been preferred.

It was another week where WWE Smackdown Live proved that a show built heavily around strong wrestling matches is more entertaining than a typical WWE broadcast. There were two matches advertised from a week ago, each of them got over 15 minutes and the other matches were entertaining too. There wasn’t a lot of talking or backstage segments either. It felt like a pure wrestling show more than anything, which is what I love to watch.

Here’s a look at the main event and John Cena avoiding a serious injury.

The feud between Mahal and Orton has run its course, yet we got one more match between them here. The hook for this one was that the Singh brothers were injured and couldn’t be at ringside, thus they couldn’t interfere in the match. Could Mahal beat Orton without his henchmen’s help?

There wasn’t much to the “Grudge Match” selling of this bout, other than Orton still holds a grudge against Mahal and the Singh brothers for attacking his father, “Cowboy” Bob Orton, at ringside their title match at June’s Money in the Bank event. Orton pretty much dominated throughout, highlighted by him suplexing Mahal into the announce table.

Mahal briefly gained an upper hand by throwing Orton into the timekeeper’s area before Orton could RKO Mahal outside the ring. But Orton recovered quickly, battering Mahal with a superplex, fallaway slam and a powerslam. Mahal eventually came back with a flying knee and a near-fall, but he couldn’t get Orton into his Khallas finisher. From there, Orton nailed Mahal with a DDT and Mahal laid out Orton with a superkick. But his second attempt at a Khallas was nicely countered by a RKO which finished the match.

As Orton savored his (long overdue) win backing up the ramp, however, Rusev attacked his SummerSlam opponent with a superkick to the face. Smackdown‘s broadcast ended just as the kick landed, so USA Network viewers had to digest that development with a dose of Ryan Phillippe and Shooter.

Tuesday’s show began with Cena coming to the ring and building up Nakamura, who beat him in last week’s “Dream Match.” Nakamura earned Cena’s respect and the message seemed to be that the WWE Universe should respect him as well. But is there really any question about that? (Maybe the underlying message to fans was that Nakamura taking on Jinder Mahal for the WWE Title at SummerSlam is worth signing up for WWE Network.)

Cena was then interrupted by Baron Corbin, who’s had something of a feud with Nakamura. Corbin attacked Nakamura after last week’s match, which prompted Cena to intervene and eventually slam Corbin through the announce table. Still mad about that, Corbin taunted Cena with his Money in the Bank briefcase, saying he had bigger ambitions. Cena challenged Corbin to step in the ring, but Corbin declined, saying Cena didn’t really have anything Corbin wanted. So he wasn’t going to waste his time with him.

That’s when Smackdown general manager Daniel Bryan stepped in and declared that Cena and Corbin would face each other at SummerSlam. Will that interfere with any plans that Corbin may have had to cash in his Money in the Bank contract for a WWE Title shot after Nakamura and Jinder Mahal face each other? It might not matter, unless Cena takes too much out of him in their match.

Here are the other matches from Tuesday’s card in Toronto.

This is one way for Smackdown to work a couple of their midcard guys into the mix. Teaming Dillinger and Zayn also provided an opportunity for two Canadian WWE stars to perform in front of the Toronto crowd. Zayn is currently involved in a feud with Mike Kanellis, but a pairing with Dillinger for future tag team competition could be intriguing.

But the Usos’ experience in working as a regular tag team gave them the advantage from the outset. Zayn was worked over for a good part of the match until Dillinger got the hot tag and cleared the Usos out of the ring with clotheslines and foot stomps. Attempting a suicide dive, Dillinger ran into a Jay Uso forearm, but Zayn followed up with a leaping flip that laid out both brothers.

Dillinger nearly got a pinfall on Jay Uso with a powerbomb. But Jimmy Uso then nailed Zayne with a superkick outside the ring, leaving Dillinger on his own. Jay initially tried to get Dillinger into a superplex, but then tagged Jimmy, which Dillinger didn’t realize. Not realizing that Jay wasn’t the legal man, Dillinger attempted the Tye Breaker, but Jimmy kicked him in the stomach. The Usos then double-teamed Dillinger with Jay kicking him in the back of the left knee. Jimmy followed up with his Tequila Sunrise submission hold and Dillinger tapped out.

More important was the aftermath of the match when The Usos tried to call out The New Day. Big E then walked out on the ramp wearing a red jumpsuit, which distracted The Usos from being attacked by Kofi Kingston and Xavier Woods, also dressed in red jumpsuits. Kingston and Woods were ready to whack The Usos with steel chairs, but managed to get out of the ring before those chairs could connect.

As could be expected, the inexperienced Lana was no match for the veteran Charlotte, who was clearly bigger, much stronger and more skilled. This thing was over in two minutes, as Flair laughed at and taunted an inferior opponent, mercifully ending the match by getting Lana to submit in a figure-eight leglock.

After the match, the storyline with Lana seeking mentorship from Tamina continued. Lana said she wanted to be a more “ravishing” version of Tamina, but her lack of wrestling skills can’t get her very far. Tamina thinks Lana’s ambition can help her, however. But to what end? A feud with Charlotte? A women’s title shot?

With Carmella having a Money in the Bank contract for a Smackdown Women’s Title shot, a confrontation between her and Naomi is inevitable. Last week, Naomi got Carmella to tap out in a tag team match, but the two matched up in a singles bout here — presumably for Naomi to show that she can handle Carmella no matter when she decides to cash in that contract.

But Carmella has a key part of her arsenal back with James Ellsworth’s 30-day suspension over. (That went by fast.) He slithered out from below the ring to knock Naomi off the top rope and set her up for a superkick to the chin from Carmella and the pinfall win.

After the match, Natalya confronted Carmella and Ellsworth backstage, saying they’d better not interfere with her title match against Naomi at SummerSlam. WWE sure seems to be setting up the story that Carmella will cash in her Money in the Bank contract after the Naomi-Natalya match? So will she upstage Natalya by beating Naomi afterwards or will Natalya’s title reign be extremely short-lived?

Other Key Items From Smackdown

Following Styles’ controversial win over Owens last week in which the disoriented referee didn’t see that Owens’s right shoulder was clearly up during the pinfall, Daniel Bryan said there would be a US Title rematch at SummerSlam with McMahon officiating.

The three came to the ring for a promo in which Owens insisted that McMahon couldn’t be objective, given the previous feud between him and Styles that culminated in a match at WrestleMania in March. Owens then pointed out a past match that McMahon refereed, the 1998 Survivor Series match between Steve Austin and Mankind, and denied Austin a proper pinfall. Either wrestler could get screwed over by McMahon, but if they both have grudges against him, doesn’t that make McMahon objective?

Really, this whole segment was a good advertisement for WWE Network, which Owens practically admitted. Look at all the old matches and moments you can find on WWE Network!

I don’t know how many Twin Peaks fans are among the WWE universe, but this wasn’t a bad parody of Showtime’s 1990s revival. Last week, Fandango went missing but turned back up in the Fashion Police’s office. Tyler Breeze made a crack about taking 18 episodes for Fandango to return to normal, which is essentially what Twin Peaks is doing with FBI Agent Dale Cooper, who’s been gone for 25 years. Somebody on the WWE creative team must be a David Lynch fan.

There was a bit of a payoff with wrestling legend Arn Anderson making an appearance to say he destroyed Tully the horse. (Presumably, that’s a reference to Anderson’s fellow Four Horseman, Tully Blanchard?) To be continued. But are these sketches actually leading to anything or are they supposed to be an entertaining diversion between matches?

Looking Ahead to WWE SummerSlam

The SummerSlam pay-per-view event is set for August 20 in Brooklyn, New York. This is the card so far.

Big Cass vs. Big Show (with Enzo Amore suspended above the ring in a shark cage)

Other matches that haven’t been confirmed, but look likely are The Miz vs. Jason Jordan for the Intercontinental Title, Sheamus/Cesaro vs. Ambrose/Rollins for the Raw Tag Team Championship, and The New Day vs. The Usos for the Smackdown Tag Team Title.

John will be back with his usual commentary next week. Thanks for checking in!