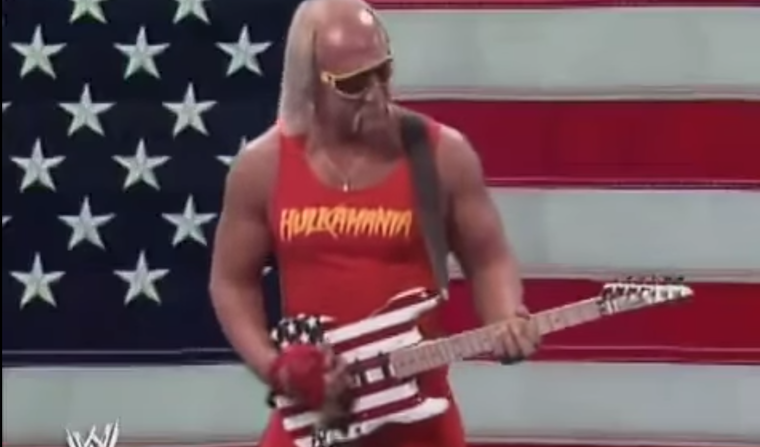 There are three things a professional wrestler needs to be successful. First, you need to actually be a great wrestler in the ring. Or at the very least, you need to be decent enough so you don’t injure yourself or your opponent. Next, you need to be able to talk on the mic. Or, look so menacing that you can have a manager who will do your talking for you while you look menacing.

Last but not least, you need to have a great gimmick and great look to your character. Having those three things will get you pretty far in professional wrestling.

One part of having a great gimmick is your theme song. That is usually one of the first ways to make an impression, so having a great theme song that not only sounds great, but also fits the character, really can make a difference in someone being just an average wrestler to being one of the best.

In honor of WrestleMania 34, we are counting down the 34 greatest WWE theme songs of all time. This list is filled with people from all over the WWE spectrum. From midcarders to legends, each theme on this list carries a distinction as playing a pivotal part to the careers of these wrestlers throughout the years.

There are some important things to consider to better understand why some of these are listed where they are. First, I only ranked these 34 based on the theme song itself. While some on the list may be known for the entrance and/or crowd reaction which came as a result, that did not influence the ranking. Also, themes from other organizations (such as the Four Horsemen from WCW) were not included, but if a theme originated in WCW and made its way to WWE (like NWO), that can be on the list.

In fact, themes were ranked based on three points.

After leaving his father to “own” WCW, it didn’t make sense for Shane McMahon to come down to the ring with the same theme as his father Vince. So instead, Shane dances out to this theme that really fits him when he’s a heel or face. When you can keep the same theme whenever you’re a bad guy or good guy, you know you got something.

You’re going to see a lot of Triple H in his countdown. That makes sense when you have Motorhead doing your theme songs. But Motorhead’s most underrated theme is arguably their theme for Evolution. The concept was simple, but is easier said than done: a theme that showcases this group being this generation’s Four Horsemen. Safe to say Motorhead excelled at that. It just didn’t have the same lifespan as some of their better-known themes.

I tried very hard to not incorporate entrances into my decisions, but Gangrel’s entrance coming up through the stage around the ring of fire was one of the best. But the music still incorporated the vampire-type character that Gangrel was. This persona was also instrumental for bringing in two of the greatest tag teams ever, Edge & Christian and the Hardy Boyz.

Mr. Perfect’s theme is regal, but not too pompous and that, in a way, fits with the person. Mr. Perfect was slightly pompous, but still seemed like a regular guy. A regular guy who seemed to do everything perfectly and make you upset/jealous that you couldn’t do that too.

“Viva la Raza!” For a theme about lying, cheating and stealing, Eddie Guerrero was able to playfully incorporate these normally bad traits as a babyface and the fans really went for it. That just showed what kind of charisma Guerrero had in and out of the ring.

This is going to sound like a hot take, but I wasn’t much of a Daniel Bryan fan as many other people. I definitely respected and appreciated what Daniel Bryan did and was sad for him when he was forced to retire, but I didn’t quite get it. Bryan’s theme, a variation of Richard Wagner’s “Ride of the Valkyries,” suited the creator of the “Yes! Movement” and now that he’s medically cleared for in-ring competition, I might get a second chance and learn to appreciate Daniel Bryan.

I debated putting the NWO on the list because their time in WWE was mostly awful, but this theme truly is a classic and deserves to be on the list somewhere. The theme may not be as iconic as it was in WCW and if I was doing an article on best WCW themes, this would likely be number one. But this is certainly a theme that is remembered despite its short shelf life in WWE.

“Can you dig it, sucka!” Booker T’s theme may have originated in WCW but made a lasting impression when he came to WWE, becoming one of the few to successfully cross over from the end of WCW to have a career in WWE. Overall, a theme fitting of the five-time WCW Champion.

It’s a shame Matt Hardy “Deleted” Bray Wyatt because it means we probably won’t be hearing this theme anymore. This very much personifies the leader of the cultish Cape Fear-like Wyatt family. This theme is creepy and catchy, and that’s kind of how you would describe Bray Wyatt’s character. Well, at least that was the case before he disappeared in the Lake of Reincarnation.

Mick Foley was a genius when it came to character development. Even though he and WWE made no secret he was “Mrs. Foley’s baby boy,” we still believed he was Cactus Jack, Dude Love or Mankind because Foley believed he was that character. While many remember Foley’s Mankind as the fun-loving jokester in later years, I loved the original twisted and tortured Mankind.

“Ode to Freud” showed the pain Mankind faced as someone who only wanted to be normal, but knew he wasn’t ever going to be that. This theme also provided a rarity that not many other wrestlers had, an exit theme that consisted of a piano score and strings that would play after he won a match. That beautifully contrasted the character and added an extra dimension to Mankind.

Throughout Brock Lesnar’s full-time and part-time WWE runs, he has only used this theme. And in many ways, this has been the only theme Brock Lesnar has ever needed. This really is the big, imposing theme song that a big, imposing fighter should have. And when you hear that initial screech, you know it’s about to go down.

“Say hello to The Bad Guy.” Think of Tony Montana as a wrestler and you get Razor Ramon. And when you think of Razor Ramon, you think of this theme. Everything about this is so Miami and so cocky, just like Razor himself. It’s also not a bad tune to blast in your car while driving down the street.

Arguably the character who planted the seeds that took WWE to the edgier Attitude Era, Goldust was… bizarre. But despite multiple tweaks to the character as well as many absences and returns to WWE over the years, Goldust has always had a very epic sounding theme that sounds like it would be a part of a Cecil B. DeMille film.

Bobby Roode has only been in WWE for a couple years, but he hit the jackpot with an incredibly memorable theme song that everyone loves. If there is one issue, it’s that Roode’s theme is so good that it’s tough for fans to boo and make him a heel so he could really embrace his “Ric Flair-esque” character. But who knows, Flair was beloved by fans for years, even though he is the “dirtiest player in the game” so maybe it’s not so bad for Roode to keep getting cheers no matter what he does in the future.

It’s very rare that WWE licenses theme music for their superstars. For one thing, that costs money and if WWE is paying people to create music for them, why should they get somebody else’s music? Thank goodness, WWE made an exception here and got the rights to Living Colour’s “Cult of Personality” for CM Punk. I have to admit, when I was younger, I didn’t much care for “Cult of Personality.” But then I heard it within the context of CM Punk and suddenly everything made sense and I grew to love it.