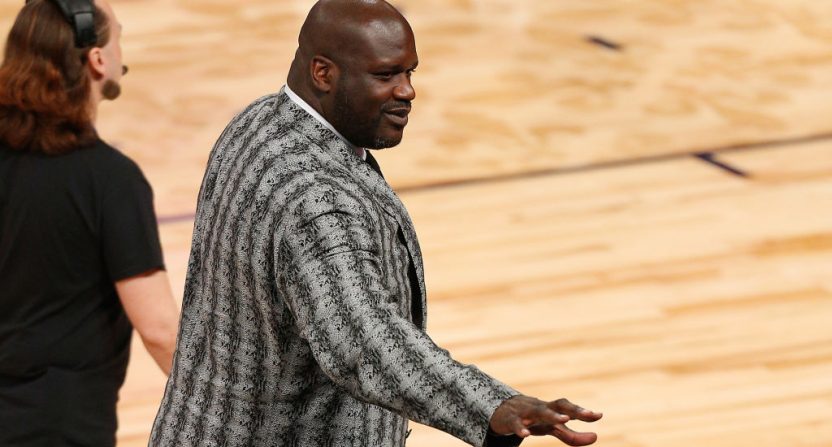 WrestleMania 33 is coming up and that means that matches are materializing bit by bit. One match that you won’t likely be seeing is a showdown between the Big Show and Shaquille O’Neal.

The two went toe-to-toe at the Andre the Giant Memorial Battle Royal last year and it seemed like the two would face off sooner rather than later. The hype around the two seven-footers has since died down and made a possible primetime event look like a distant possibility.

The Big Show, whose real name is Paul Wight Jr., spoke to ESPN.com about the issues in the match making:

“It’s on Shaq. He has to figure things out in his own camp. Maybe he is just too scared to show up because he’s too busy riding around singing karaoke with John Cena and going to Krispy Kreme and getting fatter every week.”

Those don’t seem to be peaceful words. In fact, it kind of sounds like pre-fight hype if you ask me. On Shaq’s own podcast, he kept his answer vague why he wasn’t trying to make this fight happen.

The Big Show pointed out in more comments to ESPN saying that he is out of shape and not ready to step in the ring:

If they are trying to make it sound like this isn’t going to happen, this is only doing the complete opposite. This fight is bound to happen at WrestleMania 33 now. The Big Show maintains that Shaq is likely embarrassed and that is why he won’t fight in the WWE’s showcase event.

“Maybe he doesn’t want to put on spandex and show the entire world that Shaquille O’Neal, one of the greatest basketball players of all time, looks like Jabba the Hutt. It’s on him. He has to weigh these consequences in his own mind. Does he want the world to know how fat and out of shape he is? Or does he want to sit back and talk s— into a podcast?”

This is making an old school wrestling fan excited for this complete oddity of a match. Who wouldn’t want to see these two face-off? It sounds like a match made in Vince McMahon’s heaven. Let’s hope we are all so lucky to see this battle.