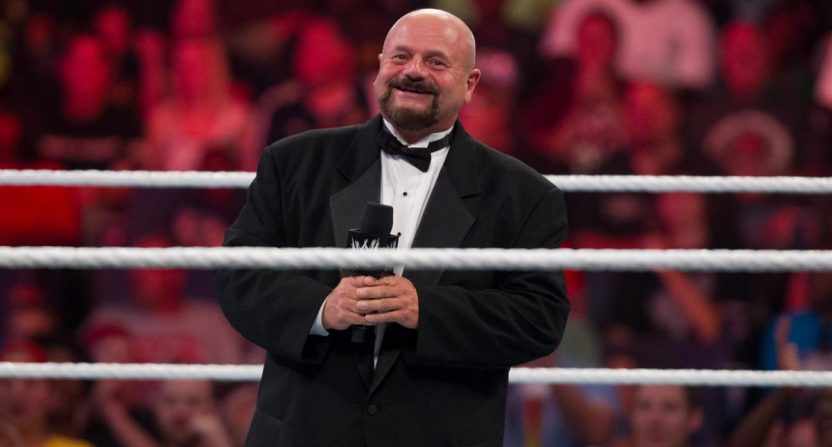 Throughout the years, Howard Finkel had been the in-ring voice of so many monumental WWE moments. You can’t picture some of the most legendary moments in pro wrestling history without hearing Finkel’s voice resonate throughout the arena. Finkel died at the age of 69.

“The Fink” began ring announcing for what was then known as the WWWF in 1977 and went full-time for the company in 1979. When the company became the WWF in 1980, Finkel was their first employee and was their longest tenured employee in the company, being the top ring announcer for their top shows and pay-per-views. If you really sat down and thought about Finkel’s career, he was announcing since before Vince McMahon took over the company and before Hulkamania. He announced through Hulkamania, as well as the New Generation and Attitude Eras. And even though he cut back on ring announcing, “The Fink” made appearances throughout the Ruthless Aggression Era and into the modern day.

From personal experience, the first WWE show I went to in-person was a house show in 2002. It wasn’t televised and all but Howard Finkel was the ring announcer and he made every match sound like it was the main event of WrestleMania. “The Fink” and his voice would really make a moment memorable. He was the man.

Finkel was much more than a ring announcer for WWE. He worked in the office throughout his tenure and came up with some ideas that we remember to this day. Finkel came up with the name “WrestleMania” and given it was almost called “The Colossal Tussle,” it’s probably thanks to Finkel that there’s still a WWE because I’m not sure the company would’ve lasted very long if the biggest show in the company was named “The Colossal Tussle.”

What might be Finkel’s lasting achievement in pro wrestling is that he was highly respected and liked throughout the industry. Pro wrestling is a business that can bring a lot of enemies and not too many friends but everyone seemed to like Finkel and lots of people paid tribute and their respects to the Hall of Famer and one of the pillars of pro wrestling.

We might as well call him the voice of WWE Network. #ThankYouFink 🙏 pic.twitter.com/hdfJXY7fbp

In what has already been a tough week for our @WWE family, today we lost our 1st ever employee and WWE Hall of Famer, @howardfinkel. Howard’s voice is iconic & recognized by generations of fans. He will be missed. #RIPHowardFinkel Thank you for everything. ❤️🙏❤️

You weren’t someone until you heard Howard announce you. A championship win didn’t feel real until you heard him say “and the new!” His voice, his personality, and his positivity will be sorely missed. Thank you for everything…especially your friendship. https://t.co/CYSPt6vnvU

Howard Finkle was on Team Hogan through the good and bad times,even when I was on the outs Howard would call on a consistent basis to tell me to always keep my head up,it was” never say never” and “you and Vince will work it out”,my good friend RIP,I love you 4LifeHH

Last time I saw Howard was when a few of the boys got together to go visit him. He was very happy and so were we.

At one point, he busted out that trademark flawless ring announcer voice and rocked the whole place. He still had the pipes.

Saddened about the passing of my friend & colleague, Howard "The Fink" Finkel. Fink was my main contact when I first starting getting myself & Jeff booked as extras in the mid 90s. Howard always took great care of us & had a soft spot in his heart The Hardy Boyz. #RIPFink pic.twitter.com/dNPTscanuR

Fink was the voice of my childhood. Ya know what else? He was the kindest human being I ever met & I cherished our conversations.

Here’s him announcing the first NXT Title match. Hearing his voice say my name was a dream come true. May he rest in power. https://t.co/9qrWBTaGlE

First met Howard Finkel in 1993 when I started working with @WWE.
Always the most helpful and genuine friend to everyone he came in contact with. My favorite day with Howard was when he and I attended a Cleveland Browns, New York Jets game together. Miss you, Fink! RIP pic.twitter.com/z5PP9MeEEJ

So sad to hear of the passing of my friend, the greatest ring announcer in the biz, Howard Finkel, at the age of 69.

The Hall of Famer is now ring announcing in Heaven. #RIPFink

No one was more loyal or loved pro wrestling more than The Fink. 🙏

Howard Finkel was a great friend and mentor to me. I was so blessed to be able to look to him for guidance, honesty and the occasional bit of humor. He spoke with kindness, and always had a sparkle in his eye when speaking about our industry. Thank you for everything Howard. 💛

The voice of a generation and the kindest, most loving human you could meet. RIP Howard. We will all miss you. pic.twitter.com/PA3CPyF1rp

HOWARD FINKEL was an iconic figure in the annals of Professional Wrestling-WWF/WWE-history! A true gentleman and he will be missed. Heartfelt condolences wife, Cathie & family.
R.I.P. The Fink💔🕊
⁦@WWE⁩ ⁦@VinceMcMahon⁩ ⁦@StephMcMahon⁩ https://t.co/Lok6Z1qyDA

At WrestleMania 2000 after E&C won our first tag titles I found myself alone in the locker room w/ Howard Finkel after the show. I said “Howard, I’ve waited my whole life to hear YOU say those words”.. AAAND NEWWW.. he hugged me.. He was genuine. He was the best. RIP

When I first got to WWE, I couldn’t wait to hear Howard Finkel announce my name. He’s without a doubt the greatest ring announcer of all time. #RIPFink

I remember watching this at the @WMCActionNews5 studio in Memphis when it aired live …it was so good and amazingly shocking to longtime @WWE fans…what a heel The Fink was! #USWA https://t.co/GHetz1Wpfd

RIP Fink. The voice of my childhood… pic.twitter.com/qBKMWGm1KC

Hearing him call my name was the most hype thing I have ever experienced. It validated me. Man Fink and I been up and down the road. So much love for him. #RIPFink pic.twitter.com/DZohfVeN5Z

I’m sad to hear of the passing of Howard Finkel! He was a gentleman and kind soul! I will always be debted to him for escorting Eddie from Minneapolis to Phoenix after he passed. When he called me….he said…”I don’t want Eddie to be flown home by himself”. RIP love you friend pic.twitter.com/gZM1ZMCltQ

Im crushed
I lost my friend today
I saw him once a month
The Voice of Wrestling
I loved him so much
The Fink pic.twitter.com/EOWmADTkjO

Dammit, this is a another kick in the gut. 😞😞 Rest Easy Fink! One of the greatest and most recognizable voices in history. Loved this dude. Everyone did. https://t.co/MklOpTCacu

God Bless ya Fink. 🙏
Thanks for the childhood memories.
Thanks for always being on our side.
Thanks for being a friend. pic.twitter.com/33UCOChwPc

The Fink was awesome. Love you and miss you, my friend. #RIPFink

💔💔💔 This all simply can’t be real right now…Rest In Peace, Fink. Friday will be for you. Absolutely heartbroken. #HowardFinkel #TheFink #OneFall

I'm absolutely gutted over the passing of Howard Finkel. Another voice of my childhood has been silenced. Such a sweet, sweet man. I'll miss our conversations about wrestling and Rock N Roll. This ABSOLUTELY sucks. Love ya Fink! pic.twitter.com/eAX0cOktda