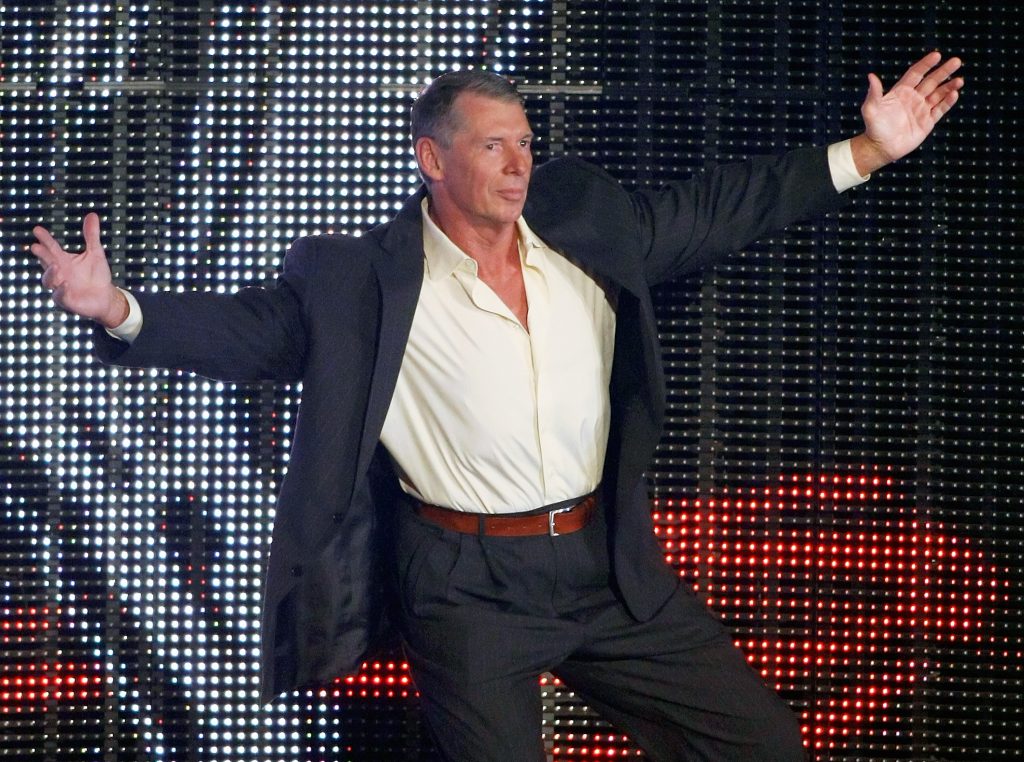 In the last week alone, there’s been a lot of big news in the WWE. Braun Strowman continued his march towards glory when he defeated Roman Reigns at Payback. Jinder Mahal stole Randy Orton’s WWE Title and then cost him the House of Horrors match against Bray Wyatt. We learned that a WWE PPV event in the year 2017 will be called Great Balls of Fire because Rock Around The Clock was already taken?

Finally, and perhaps most exciting of all, we learned that a Vince McMahon biopic called Pandemonium was in development with TriStar Pictures (part of Sony Pictures Entertainment). The notion of a real-deal motion picture that tracks the history of the world’s biggest professional wrestling company is something fans have been wanting for years.

Of course, the fact that WWE Studios is helping to produce the film and McMahon himself will have a say in the story means that we probably won’t get the down and dirty version we all really want. Still, the chance to see some of the most monumental moments in pro wrestling history, as well as the behind the scenes madness that made them happen, is good enough.

Wrestling fans love to fantasy book their favorite wrestlers, trying to figure out how PPV cards and title reigns might shake out. So why would the thinking work any differently for this? The success of Pandemonium might just hinge on  the actor picked to represent Mr. McMahon, a.k.a. “The Boss,” a.k.a. “The Chairman,” a.k.a. “The Genetic Jackhammer.” Longtime wrestling fans have very clear ideas in their minds of how Vince walks and talks and conducts himself. So who can pull it off?

First, let’s consider some logistics. This is going to be based on McMahon’s life story, so that means we need someone who can feasibly play him in the early 1980s when he took over the WWF from his father at the age of 35. Assuming they take things into the wildly-successful Attitude Era, they also need to be able to portray him at 60. Either we need an actor in his 40s (or so) who can be aged up believably or we need an older actor who can get away with playing younger. Let’s see who comes to mind.

More than a few people have thrown Nic Cage out there as a potential Vince McMahon. At first blush, there’s something there. At 53, he’s still in that age range where he can play older McMahon easily and, with the help of some makeup, potentially make younger McMahon work as well. We know Nic can go big (perhaps too big?) for the moments that call for it.

The question I have is, can Nic Cage play this role, or any role, without being Nic Cage? Vince will want to be represented by an actor who can disappear somewhat into his larger-than-life presence. Cage might already be too big of a personality to do so.

Going the other way, let’s consider the 42-year-old actor with four Academy Award nominations under his belt already. Cooper could nail young Vince pretty easily. His method style of acting could lead to some very strange behind-the-scenes stories, but could also lead to him disappearing into the role in a way many others couldn’t. He’s also proven he can make the physical changes needed to match Vince’s ever-changing physique over the years.

Where we run into problems is when we get into older Vince. Can they do a good-enough make-up job to make Cooper a believable 60-year-old Vince? Could he master the physicality of an elder, bulky McMahon without it looking like parody? All due respect to Mr. McMahon, but Cooper might be a little too handsome for the role.

Neeson’s got the look, doesn’t he? He’s handsome, but on the back end of his prime. He’s menacing, but can also give you a nice bit of understated nuance as well. The tone of his voice might just match up about as well as anyone we’re considering.

However, you’ve got the accent to deal with (he’ll do an American accent, but it’ll feel weird the whole time). Plus, there’s no way Liam can pull off young Vince. You’d either have to have a different actor or go with some very dodgy scenes.

Every time we train together I forget he's 61 years old. So much respect for this guy. #JKSimmons #OldManCranking

Known for being ornery and yelling a lot, Simmons might fit the bill for Vince McMahon. You saw how bulked up he got recently, so you know he’s got that part down. Honestly, you could probably just slap a wig on him and he’d nail latter-day Vince perfectly.

The problem, of course, is when we’re discussing younger Vince. It’d be strange to make a movie about the man’s life story and not have a focus on the 1980s when Vince was in his 40s. It’s too much of a stretch to put 62-year-old Simmons in that spot.

If we’re going to try to class the joint up a little bit, we might want to consider Walter White. Just from Breaking Bad alone, we know he can be aged down or up and take on a wide variety of looks. We run into the same issue when it comes to believability, but Cranston has the ability to look young enough. We know he can be fiery. We know he can yell. We know he can be a powder keg of anger and resentment. And we know he can play things for laughs when needed as well. He might not have the exact look down, but you probably couldn’t go wrong here.

This one feels pretty good, right? Michael Shannon was genetically created in a lab to make movies in which he is screaming into the face of other men. He’s probably just about the perfect age to play 1980s Vince and he’s got the kind of gravitas to make the most of it. As we get into older Vince, which includes bulked-up Vince, we get into a little bit of a problem. Shannon could always hit the gym to make it work.

The one thing that concerns me is that Vince has a bit of a sliminess factor (all due respect) and while Shannon brings the intensity, it might not be the exact fit for the slime ball factor.

Finally, we arrive at my choice for Vince McMahon and I’ll explain why. First of all, he’s probably the biggest-name actor you’re going to find who kinda-sorta looks like Vince already. They both have that working class vibe that emanates off them, even though they’re both millionaires at this point.

Keaton is older (65), but he’s got one of those faces that can pass for 50s and even 40s with the right make-up. He just played Ray Kroc in The Founder at a time when Kroc was pushing 50, so he can pull it off. And frankly, you can just picture Keaton doing the Vince Walk down the ramp and yelling “YOU’RE FIRED” in someone’s face, can’t you?