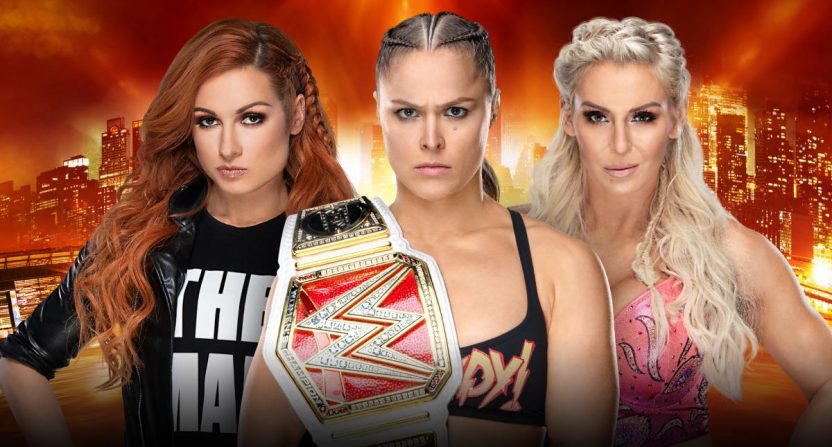 As an entity, it would be fair to say that WWE has been problematic. It’s still fairly common to see the sports entertainment company position foreign-born wrestlers and people of color as bad guys simply because of who they are. They have no problem taking money from Saudi Arabia for a long-term contract in spite of literal murders and human rights violations involving that country’s leaders. Time and time again, they seem to try to slip past the critics by honoring former stars with very dubious concerns, including Fabulous Moolah (exploited other female wrestlers), Hulk Hogan (racist), and The Ultimate Warrior (white supremacist, homophobe).

In recent years, the company has been a mixed bag when it comes to its own women’s revolution. While WWE women’s wrestling has grown by leaps and bounds in the last decade, each step forward often seems to come with a step back, or at least to the side. After much complaining, WWE scrapped the Divas brand in 2016 and replaced it with the WWE Women’s Championship (and later the Smackdown Women’s Championship). Women’s matches were sometimes given high status but other times pushed to the side. The all-women PPV Evolution was a huge step towards legitimizing their value in the eye’s of WWE fans, but the event ultimately felt somewhat like a sideshow, with some seeing it as WWE throwing them a bone because women couldn’t participate in the high-profile Saudi Arabia events.

In the past year, WWE struck gold as two disparate events changed the look and feel of women’s wrestling in the company forever. First, the arrival and quick ascension of Ronda Rousey meant that the most well-known performer in the entire company was female. Second, Becky Lynch’s evolution into The Man was the kind of star-making run that only happens once or twice a decade and, previously to this, only with men. Throw in the rebirth of Charlotte Flair, the prototype female WWE wrestler, and you had the recipe for something truly special, presuming that Vince McMahon and his instincts could just get out of the way.

All of that can now culminate, in theory, at WrestleMania 35. As many had been hoping, WWE announced Monday that the triple threat match between Rousey, Lynch, and Flair will be the main event of the company’s biggest yearly event, making it the first-ever women’s match to do so.

On paper, this is a no-brainer. But given the WWE’s history, it’s fair to say that few people would have been surprised to find out that it ended up being the next-to-last match behind Brock Lesnar’s latest title defense or whatever Roman Reigns ends up doing. The assumption, based on years of proof, would be that WWE has its own idea of what they want and this isn’t it. But credit where credit is due this time, for actually reading the tea leaves this time and understanding the value of what they have.

Of course, it’s ultimately up to this trio of talented women to make the most of the spot they’ve earned. Female wrestlers have stepped up time and time again in WWE, and it’d be hard to believe that won’t happen again here. While there are rumors that Rousey is leaving the company after the match, Lynch and Flair will likely be mainstays of the company for years to come and this kind of event shouldn’t be seen as the final part of their ascension. Instead, it should just be one of many main events to come.

Hopefully, WWE gets out of its own way long enough to see that too.