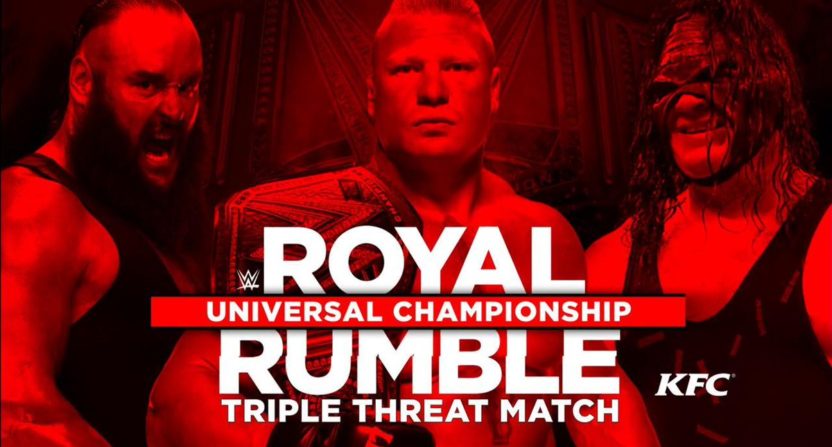 The first WWE pay-per-view event of 2018 is set to take place in Philadelphia on January 28. It’s the Royal Rumble, which started 30 years ago in 1988 when “Hacksaw” Jim Duggan won the first televised 30-man Rumble match during a special on USA Network.

In 1989, the Royal Rumble became a pay-per-view event and ever since then, it has become one of WWE’s biggest shows of the year. If you want some more Royal Rumble history, check out my top 10 list right here on The Comeback (cheap pop!) on the best Rumble matches ever.

Here’s the lineup so far with four big matches already announced with some early thoughts on everything. I’ll save the more in-depth predictions until a few days before the show.

The original plan for Lesnar was to face Finn Balor at the Royal Rumble, but WWE Chairman Vince McMahon changed his mind two months ago and Balor wasn’t pushed into that spot — probably because Vince thinks he’s too small. Vince has always loved big men wrestlers, which is obvious from the booking of this match. Kane is in the match to get pinned by Lesnar, which will protect Strowman.

It would be shocking if Lesnar loses the Universal Championship here. Lesnar is likely to hold it until WrestleMania 34 (giving him a title reign of one year), where it’s expected he will lose to Roman Reigns. That’s the story that was reported last March and there’s no indication the plan has changed.

A sunny morning on the first day of 2018. Possibilities are endless, opportunities are plentiful. Time to #EarnTheDay because on January 28th, I’m entering the #RoyalRumble match and earning a chance at history @WrestleMania! #Raw

There are only six names announced for the Rumble match so far. From WWE.com:

Is the winner in that group? I hope so, because I want Shinsuke Nakamura to win the Rumble and then move on to face AJ Styles for the WWE Championship at WrestleMania. The reason that may not happen is Nakamura hasn’t been pushed to that elite level he probably should be. Finn Balor winning would be pretty cool if he jumped to Smackdown to challenge Styles for the WWE Title at WrestleMania, considering how good their match at last October’s TLC show was.

Roman Reigns is a possible winner because of the planned Reigns vs. Lesnar match at WrestleMania. However, Raw also has the Elimination Chamber pay-per-view in February and they could use that six-man match to determine the challenger for Lesnar and that’s where Reigns can win. That’s why a Smackdown guy like Nakamura winning makes the most sense. Plus, the Rumble is in Philly, the same city that booed Reigns heavily when he won the 2015 Royal Rumble. I don’t think WWE is going to do it again.

It’s the first time WWE is doing a women’s Royal Rumble, which is pretty cool and also long overdue. It was announced on last Monday’s Raw that it will be 30 women in the match and it’s the same “over the top rope, both feet must touch the floor” rule for the women that the men have been using for 30 years.

I’m going to shine the spotlight on this match in a column later on, but two quick thoughts:

** Ronda Rousey is my pick to win. It’s rumored that she is starting in WWE soon. They aren’t saying anything, but she has been training to wrestle for months. I think she’ll be a surprise entrant who wins the match, leading to the showdown with Asuka (or perhaps Smackdown Women’s Champion Charlotte Flair) at WrestleMania.

Styles has lost non-title singles matches to the best friend duo of Owens and Zayn in the last two weeks on Smackdown. Both finishes were controversial. After this week’s frustrating match, Styles sarcastically said that maybe he should have a handicap match against Owens and Zayn. Smackdown general manager Daniel Bryan, who is bickering with Commissioner Shane McMahon a lot, thought that was a great idea and booked the handicap match for the title. It could be the start of Bryan turning heel, although it may be tough for fans to boo the “yes” man that much.

It’s a unique situation because you rarely see a handicap match for a title on a major pay-per-view. It could mean a title change, which is okay with me because I like Owens and Zayn a lot. But I like Styles even more. I want him to carry the WWE Championship into WrestleMania. I’m interested to see how the next few weeks play out in terms of building to the match. The booking of the match will be interesting too.

The only other match on the card is the US Title Tournament Finals after Dolph Ziggler quit in the storyline and left the US Title in the ring.

More on the Royal Rumble (including predictions) to come! We’ll see you back here soon.