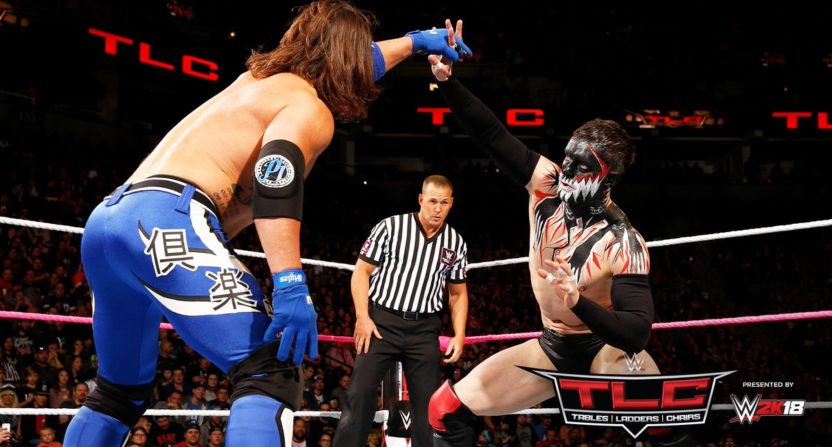 I attended my first indie wrestling show this past weekend. It was a lot of fun, I enjoyed myself most of the time, and I left early because I eventually got bored.

That last thing doesn’t seem to compute with the first two but I realized that it’s also how I seem to feel about professional wrestling on the WWE level. I think it can be fun to follow, I enjoy consuming much of the content they put out, and I find it extremely easy to disconnect out of sheer boredom with the product.

I’ve had trouble reconciling all of that for a long time. I wrote not too long ago that while I read the show recaps, watch highlight clips on YouTube, listen to wrestling podcasts, and could hold a conversation with just about anyone regarding the state of the WWE, I also never actually watch WWE programming. Some of that is a time issue (who can keep up with all that programming?) but a lot of it just a lack of interest in consuming the overall WWE product. So much of it feels either like filler or poorly concocted entertainment. Why waste my time watching the seventh incarnation of a certain match in as many weeks when I can just wait to see what happens and then pick and choose what actually sounds interesting?

It’s a dilemma that I have had a hard time figuring out how professional wrestling can solve. You have wrestlers who need to fight one another. They need to generate interest in that fight so that you’ll watch it. That usually means a protracted feud that develops stakes and emotional weight. All of that comes to a head in a match at a special event that I cannot miss. Or so it’s been.

My assumption has always been that, as someone who appreciates intricate storylines and plot development, that is where WWE usually fails. And to be fair, I can cite plenty of examples to back that up. For every feud they get “right,” there’s five or six that sputter along long past the point where anyone would care, hitting us over the head with the same bullet points, twists, and turns. It’s not as though we as wrestling fans don’t like stories that play out as we expect, it’s just that we want to see the work. More often than not, we see how little work is actually being done.

When I was at the indie show, I started to notice something I wasn’t expecting, however. I didn’t know any of the wrestlers performing that night. In some cases, I didn’t know who was the face and who the heel until the match got well underway. I didn’t know if any of these matches brought previous storylines or character arcs with them and I still have no idea. And yet, there were multiple times where it didn’t matter.

What mattered is that the characters being presented to us were clear, told a good story, hit all the right buttons, and put on a good show.

That didn’t always happen. As to be expected, not all of the wrestlers were very good at actual wrestling. The botches were clear. The communication breakdowns were plenty. The constraints of the ring and the arena (a ballroom) were evident.

It was with this epiphany that I realized the genius that the WWE stumbled into this weekend thanks in large part to the mumps.

Fate, in the form of the mumps, intervened. Both Reigns and Wyatt fell ill and were unable to perform. So, WWE scrambled. They knew they couldn’t just get rid of those matches. Paying customers would revolt and cancel their orders. They needed to pony up with something that could match or even surpass the interest level without having any time to build up these new matches as they usually do over weeks and months. Their solution was to pull the cord on Kurt Angle’s return to the ring (which everyone assumed would be saved for WrestleMania) and to bring in AJ Styles from their Smackdown brand to wrestle Balor one-on-one.

The Kurt Angle angle was a smart business move as WWE fans are always eager to see their favorites return to the ring one more time. The Styles-Balor match, however, was a stroke of genius. While neither wrestler had any specific reason to want to fight each other, the WWE scrapped their entire storytelling model and brought pro wrestling back to its roots with a one-off match-up between tw0 of the most beloved wrestlers in the world. Despite the fact that both are ostensibly faces and there were no stakes involved from a plot perspective, WWE inadvertently took the least interesting match on their card and turned it arguably into their most interesting match of the year.

It was refreshing as hell to just be able to watch a WWE match and not worry about anything other than the outcome. Part of the reason for that is because both Finn Balor and AJ Style have done such great jobs informing their characters and motivations, that we don’t need any further storylines or plots. We don’t need seven weeks of back-and-forth between them. We don’t need seven weeks of uneasy alliances that fall apart. We don’t even need the match to be for any kind of title. The match spoke for itself.

In the end, when Balor defeated Styles, you couldn’t fault the outcome for anything. It was an epic battle between two stars ending in a clean finish. On this day, Finn was the better man. On another day, perhaps it will be Styles. The best part is that we don’t need to see that rematch right away. We don’t even need to see these two guys interact for a long time. When the time and logistics are right, you could even serve up the rematch the same way. On short notice, just because.

“Just because” is a rare thing in pro wrestling. You have to put in the work to make it matter. So many “just because” matches are usually found at the front of a card because WWE doesn’t really care about developing mid-card and low-card storylines and characters. So long as they’ve got you interested in one or two matches up top, they’ve always seemed happy to just coast on everything else.

That’s likely to continue because WWE doesn’t seem to be in a hurry to change its business model. Raw and Smackdown develop storylines that culminate at PPVs (or whatever we call them now). There’s a conversation to be had about whether or not that model still makes sense, and the Balor-Styles match is a great example of why, but it’s not likely to be a conversation that will be had while Vince McMahon is still in charge.

In the meantime, I’m left thinking about the wrestling matches I saw this weekend. Most of them blend into my crowded memory of the similar matches and outcomes that came before them. But for a few, the ones that took care to showcase great characters, those stand out and will continue to stand out so long as they’re the exception and not the rule.