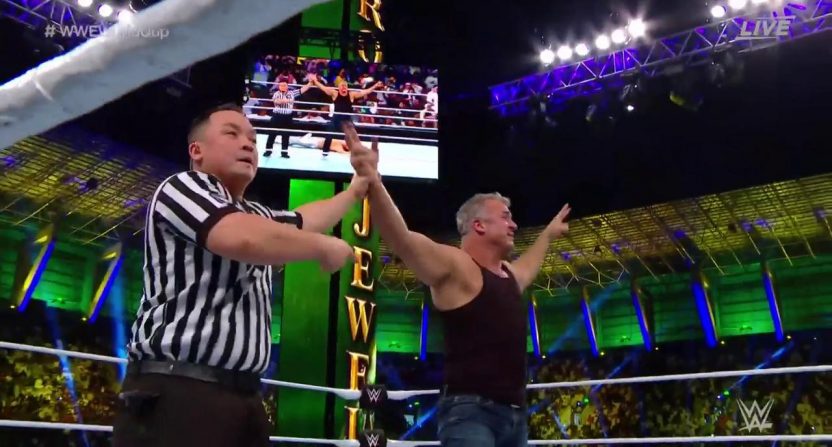 If we’ve learned one thing over the years, it’s that no one tells Vince McMahon what to do.

When his company came under fire for steroid use in the 90s, he famously barked at reporters who dared question him. When people thought it was lunacy to start a rival football league to the NFL, he went and did it anyway (and failed). When people thought only a lunatic would try to do that again, he went and did it again. All the while he’s run his pro wrestling company with an iron fist and never found an angle or storyline too salacious, too inappropriate, or too denigrating to run with.

WWE fans have been conditioned well by McMahon to put up with a lot of crap so long as there’s a good payoff in the end. They’ll sit through terrible writing, generic feuds, and poorly thought out storylines so long as there’s a great match waiting for them in the end. It’s to his credit that he’s programmed his audience to accept mediocre as good and good as amazing. Even if they spend most of their time complaining online about the product, they’ll still be the first ones to applaud when they actually get it right.

So when the WWE signed a purported 10-event deal with the Kingdom of Saudi Arabia, a nation with an extremely poor record on human rights, it felt like a bad idea to a lot of people. But those people still tuned in for The Greatest Royal Rumble, or at least let all the propaganda slide so that they could get back to enjoying Raw and Smackdown the next week.

But then, before the second event was to take place, the situation in Saudi Arabia turned into a nightmare scenario. Other companies pulled their business out, U.S. senators and other government officials publicly voiced concerns, and it seemed like the right decision would be for Crown Jewel to at least be postponed or moved, if not outright canceled.

But remember, no one tells Vince McMahon what to do. And chances are, all of the negative feedback he received over Crown Jewel only made him want to put on the event more. Just because.

And so he did. Crown Jewel went down on Friday as planned. There were some obvious changes this time around. Instead of wall-to-wall propaganda, everyone seemed to be avoiding even mentioning that they were in Saudi Arabia. Notable WWE Superstars like John Cena, Daniel Bryan, and Finn Balor were MIA. But otherwise, the show went on just as we all knew in our hearts it would, even when rumors swirled that the WWE was rethinking things (they almost certainly never were).

And just in case you weren’t clear that Vince and the WWE don’t care about anyone who questioned whether or not they should be in Saudi Arabia, here are some highlights from the event:

McMahon’s victory would be funny if not for the cruel real-world implications involved. This weekend, a movie produced by his wife hits theaters telling the true story of a journalist killed by a regime for exposing their war crimes. McMahon’s victory, which is likely meant to draw attention to that, took place in a country that almost certainly had a journalist killed for the way he reported on them.

But that also ties perfectly into the point. Vince McMahon and the WWE know that. They know the optics. They know the situation. And it’s not that they don’t care. It’s that they will actively flaunt your disdain and your disgust over that and turn it into a storyline that shoves it right back in your face. And McMahon is not only serving up a heaping serving of “fuck you” to those who disagree with all of this, but he also has decades of experience to know that you’re probably not going to do anything about it. WWE fans will continue to sign up for the WWE Network, keep tuning in to Raw and Smackdown, and keep buying merchandise. They’ll do it under the guise of supporting their favorite wrestlers, but Vince cashes the checks all the same.

It’s often said that the only way to affect change is through shame or money. Vince McMahon has made it abundantly clear that he can’t be shamed. But WWE fans have also made it clear they’re not willing to withhold their money either. So Vince and the WWE will probably be just fine as they head towards a huge TV deal and more mainstream acceptance. And whatever you thought about Crown Jewel ultimately doesn’t matter, because Vince McMahon learned a long time ago he can do whatever he wants and you won’t stop him.