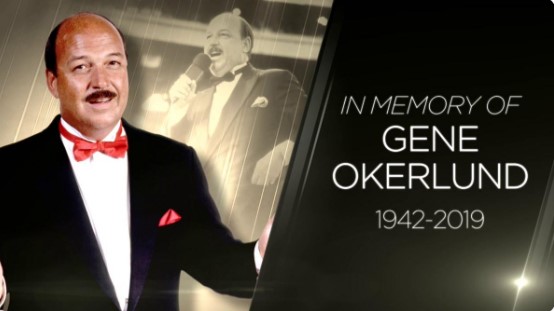 There were a lot of things that made the late, great “Mean” Gene Okerlund a legend in the wrestling business. Given the tributes pouring in for the famous announcer who passed away today at the age of 76, I think it’s fair to say that Gene is the best interviewer in the history of professional wrestling.

Gene had a distinguishable look. We will always remember the mustache, the bald head, and the bowtie he wore most of the time. Don’t forget about the voice, either. When I think of pro wrestling in the 1980s and 1990s, it’s that booming voice of Mean Gene that will always come to mind.

One Of My Closest Friends Since 1972 Until This Very Sad Day In 2019. Not Only The Greatest Voice And Personality In The History Of Announcing, But A Man Who Touched Everyone’s Life Who Were Fortunate Enough To Know Him. Rest In Peace Knowing No One Will Ever Replace You. pic.twitter.com/i7illbxQgw

Mean Gene I love you my brother HH

Gene got his start in the wrestling business in a state that was a wrestling hotbed: Minnesota. Gene started with the American Wrestling Association in 1970 and Ric Flair noted on Twitter that he had been a close friend of Gene since 1972 when Flair was wrestling in that promotion. A lot of names from the AWA went on to become huge stars in the wrestling world; Flair, Hulk Hogan, The Iron Sheik, Bob Backlund, Nick Bockwinkel, Curt Hennig (Mr. Perfect) and many others. A lot of AWA talent left for the WWF in the 1980s, including Gene in 1984 when he became a lead interviewer.

I’m in my late 30s now, so my memories of Mean Gene go back to the late 1980s WWF era when he was the guy holding the microphone while the likes of Hulk Hogan, Randy Savage, Ultimate Warrior, Roddy Piper and dozens of others would go crazy doing a promo.

What made Okerlund so great at his job is that he would be serious when it was needed, he could make jokes with the best of them and you can see that today when all these wrestlers talk about how funny he was. His facial expressions alone were often enough to elicit a laugh; I can remember him turning at the camera with a deadpan look on his face many years before Jim from The Office made that a comedy staple.

In 1993, there were some changes in the WWF, and that meant that Okerlund was out the door along with another announcing legend, Bobby Heenan. The duo left for World Championship Wrestling, mainly because they were paying great money. Did either guy really want to leave the WWF? I doubt it, but sometimes you have to make decisions that are the best thing for your family.

Okerlund brought credibility and a familiar face to WCW as soon as he walked in the door. With all due respect to every other interviewer that WCW had, none of them could do their job close to as well as Gene did. The guys that replaced Gene in the WWF like Todd Pettingill and Dok Hendrix did not do nearly as well as Gene in the role. The credibility factor was huge because if you were only a guy that watched the WWF and you flipped over to WCW where you saw Mean Gene, it might have made you interested in watching WCW.

The average wrestling fan never bought a ticket to see the ring announcer, but what Okerlund did was give the WWF and WCW a consistently great performer that was a nice addition to the show. It’s like being on a basketball team. The stars are the ones that win the games, but you need those guys off the bench to produce as well. Gene was a key part of the team and everybody in the companies he worked for knew that.

When WCW died in 2001, he was brought back to WWE for WrestleMania 17 and the gimmick battle royal. Since then, he worked out of WWE studios in Connecticut a lot of the time where he worked on the show Confidential as well as WWE’s “Vintage” shows. His last appearance on WWE TV was about one year ago when he interviewed AJ Styles at Raw 25.

It would be hard to do a listing of Gene’s best moments, so instead of that I’m just going to post some clips with some thoughts on why they were so memorable during his career.

There was a famous scene with “Ravishing” Rick Rude and Bobby Heenan in the interview area with Mean Gene ready to interview them. Suddenly, the SummerSlam logo behind them fell and Gene, who was startled by it, said “f**k it” and it’s one of the funniest bloopers in the history of wrestling. The video above is an extended clip.

Here’s a clip of Gene explaining what happened that day. He noted that it was a pre-tape and they still decided to air it. My guess is somebody thought it was hilarious, so they kept it in like that.

If you mention the 1992 Royal Rumble to a wrestling fan, most of them will immediately remember it was the night where Ric Flair become the WWF Champion for the first time in one of the best Rumble matches ever.

What was also memorable that night was when Okerlund was conducting an interview with Flair and at the start of the interview, Gene yelled: “Put that cigarette out!” It is one of the most random things somebody could say during the start of an interview, yet there it was. it always makes me laugh.

If you watched WCW television in the 1990s then you likely have fond memories of Mean Gene shilling the WCW Hotline. I still remember the number was 1-900-909-9900 even though I never called it. I just remember him saying it so many times. The fact that WWE’s Youtube channel put together a top ten list of Mean Gene’s greatest WCW hotline shilling attempts shows how it was something people are always going to remember about him.

Did you ever call the WCW Hotline? If so, Mean Gene thanks you.

The most famous night in WCW may have been at the Bash at the Beach 1996 pay-per-view event when Hulk Hogan turned heel by joining up with Scott Hall and Kevin Nash to form the New World Order. In what shouldn’t come as a surprise to any of you, there was Mean Gene right in the middle of it, ready to conduct an interview to ask Hogan why.

Gene was awesome as he tried to calm everything: “What in the world are you thinking?” Hogan told Gene to tell the people to shut up, which led to more boos. Okerlund told Hogan that what Hogan did makes him “absolutely sick to my stomach” and Okerlund continued to rant about it while telling Hogan he made the wrong decision.

It’s the best example of Gene’s value as an interviewer. In that moment, Okerlund was the voice of the fans that were pissed off about what Hogan did. He handled it perfectly.

WrestleMania 17 is the best pay-per-view ever in my opinion and I’m happy that Okerlund was a part of it along with his close friend Bobby Heenan. They were the announcers for the comedic Gimmick Battle Royal even though Gene was not normally an announcer that called the matches. He was on this night because I think Vince McMahon wanted Gene and Bobby to be at ringside for that match with so many legends from the past. It was so much fun to see Gene and Bobby ripping on guys that looked out of shape.

Mean “WOO By God” Gene as stated by Ric Flair

The great thing about YouTube is that we don’t have to try very hard to find a video montage of the great Ric Flair yelling Mean “WOO BY GOD” Gene when he was doing his promos in WCW. It was classic Flair and you could tell Okerlund loved it as much as anybody because he always had a smile on his face. Their friendship meant a lot to both guys. 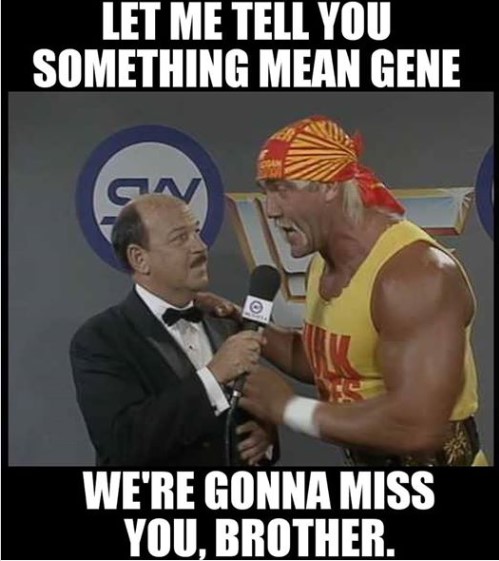 I’ll wrap it up with one more classic image of Mean Gene with Hulk Hogan by his side. Credit to Still Real to Us on Facebook for this. Whenever Hogan did an interview with Gene, he would usually utter the phrase “Well let me tell you something, Mean Gene”, and that phrase is now an important part of wrestling history.

Thank you to “Mean” Gene Okerlund for all the laughs and the memories that helped make professional wrestling fun. He truly was a special performer, and he’ll never be forgotten.