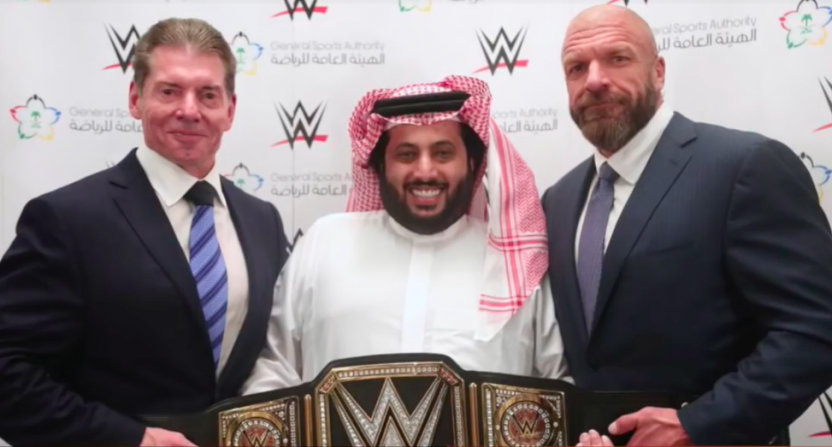 Whether or not WWE’s entertainment product is “good” is up for debate at any given moment. The problem is that everyone brings their own expectations with them when deciding what “good” pro wrestling should be. More specifically what “good WWE wrestling” should be, since it is very much its own thing.

In other words, perception is often everything for WWE. The company has, in my opinion, perfected the art of convincing its audience it’s told a great story when it actually hasn’t. For every ten storylines that the company puts in motion, maybe one or two of them actually take shape in a logical and linear trajectory that culminates in a satisfying (or at least intentional) conclusion. Oftentimes what ends up happening is that WWE botches the entire storytelling process only to stick the landing with a great match and everyone remembers the whole affair fondly and moves on.

A lot of that has to do with the neverending storytelling that WWE does. It has no offseason. It never ends. WWE Superstars show up every Monday for Raw, every Tuesday for Smackdown, and at every PPV like clockwork. They either entertain you or they beat you into a willful submission so that you accept the fact that “bad” WWE programming is just the cost of doing business that will eventually pay off in some small way, thereby making it all worth it. In other words, WWE has dampened expectations so thoroughly that any kind of small victory or successful moment feels like a triumph of the human will because of all the schlock you had to sit through to get there.

Those dampened expectations carry over into the real world as well. Outside the ring, WWE loves to toot its own horn about all the great things it does and all of the barriers it breaks. Of course, many of those great things are the same kind of crafted PR moments that any corporation creates and most of those broken barriers were created by WWE’s extremely checkered past in the first place.

That’s especially true of the upcoming Evolution PPV, the first-ever WWE event that exclusively features female performers. It’s a big deal and a monumental shift. But it’s also a big deal and monumental shift because it beats back decades of poor treatment of women wrestlers by that very same company. This is the same company that was still honoring noted abuser and generally awful human being Fabulous Moolah earlier this year until a backlash forced them to quietly drop her name. It’s a business decision, first and foremost. And that’s the point because WWE is a business, first and foremost. They go where the money takes them.

All of which leads us to Saudi Arabia, where WWE is preparing to put on their second event in a year. The Crown Jewel is currently scheduled for November 2 in Riyadh, only a few months after WWE Greatest Royal Rumble, which took place in April. The company signed a 10-year deal with the kingdom and based on the reported price tag that Crown Prince Mohammad Bin Salman’s regime has paid for the events ($50 million for GRR alone), they want their money’s worth. If Crown Jewel and Greatest Royal Rumble are any indication these shows will straddle a strange line between being glorified house shows and star-studded performances that WWE fans would kill to see at most PPVs throughout the year. Not to mention that the filler between matches is basically infomercial ads for Saudi Arabia and how great it is.

Legends such as Brock Lesnar, John Cena, Kurt Angle, Rey Mysterio, The Big Show, Kane, and Shawn Michaels are all expected to return to action for the event. The last two are extremely notable as Kane (Glenn Jacobs) was recently elected mayor of Knox County, Tennessee and Michaels hasn’t wrestled since “retiring” almost nine years ago. Despite the fact that the venue for the event was recently changed from the King Fahd International Stadium to the much-smaller King Saud University Stadium, the message is clear that WWE is going to pull out all the stops to make Saudi Arabia happy.

One thing WWE won’t be doing is bringing women wrestlers with them. The notoriously conservative kingdom forbids women from doing many things, and would certainly frown on female performers. The company took a lot of flak for that the first time around and many accused them of bowing down to an oppressive regime just to make a buck (which, to be fair, is what they did). Their tepid response was that they hoped to eventually bring women wrestlers with them in the future. Also, it’s hard not to note the timing of the Evolution PPV announcement, which was two weeks before the company announced it was returning to Saudi Arabia without women once again. Evolution may be a big step forward in one sense, but it’s also a convenient PR mask to hide the fact that it coincides with a big step back.

All of which was its own controversy before the recent events that have rocked the world. We’re just a few days removed from finding out via the Washington Post that journalist and U.S. resident Jamal Khashoggi has disappeared from the Saudi consulate in Istanbul and was probably murdered and dismembered on the orders of Mohammed bin Salman. News keeps breaking and details keep emerging but it’s become abundantly clear that the blind eye so many people have been turning towards Saudi Arabia has been replaced by a laser-focused one.

The audio recording provides some of the most persuasive and gruesome evidence that the Saudi team is responsible for Khashoggi’s death. “You can hear how he was interrogated, tortured and then murdered.” Latest group effort by @shaneharris @smekhennet @agearan and me

All of which puts WWE in quite the position. Already on the hook to take money from the human rights nightmare that is Saudi Arabia, they now risk wading into political territory that could end up being a PR disaster for them. The company released a fairly bland response on Thursday, saying they were monitoring the situation, but it’s becoming more and more clear that this event, and the deal behind it, could end up being a huge nightmare for them. Do the event as planned and you’re abetting a murderous regime. And you do all of that while also forcing your female Superstars (and probably Syrian-Canadian male wrestler Sami Zayn) to stay home while you do it.

WWE statement issued after publication: “We are currently monitoring the situation.” https://t.co/b13j0Vl5gG

We don’t know exactly how the whole ordeal is going to play out. Considering who the President of the United States is and however many financial entanglements he has with the Saudis, it’s hard to say just how much the U.S. will come down on them. For all we know, given the way the world seems to work right now, the whole thing will get brushed under the rug by next Tuesday. But chances are, there’s going to be some damage on the international stage and it could very serious. WWE does what the money tells them to do, but this could be one money-grab too far.

On WWE programming, the McMahon “characters” love to say that they always do “what’s best for business.” The actual McMahon family may want to heed that advice because what’s best for business doesn’t seem to be cashing these checks. There were already plenty of reasons for WWE to stay home, save face, and trade some money for good karma. Perhaps now they’ll finally understand that. And hey, there’s always Evolution for them to focus on. The all-women PPV that’s so important to them…right?