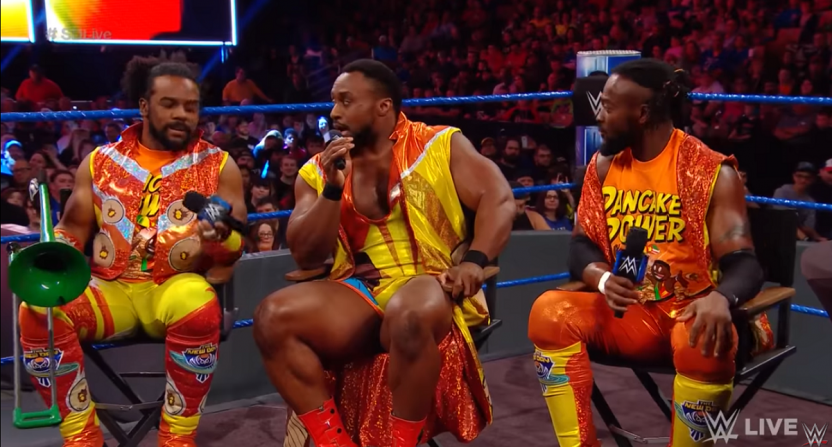 Recently, there have been multiple instances where a successful person reveals themselves to be a racist and immediately loses all of the things that brought them success. With one tweet, Roseanne Barr went from having one of the biggest hits in network television to out of a job in the span of about ten hours. This week, it was revealed that Papa John Schnatter uttered a particularly terrible word on a conference call and his entire world has crumbled in the span of three days. Brewers pitcher Josh Hader is in the middle of the cycle right now.

Juxtaposed against all of that is the news that Hulk Hogan is back in the good graces of the WWE and has been reinstated into their imaginary Hall of Fame. Hogan, who has become infamous for his role in the demise of Gawker and the sex tape that led to it, was originally blacklisted from the company following the release of an audio tape in which he was heard disparaging African-Americans and referring to them as the N-word on multiple occasions. The move was praised at the time, especially given WWE’s questionable stances on race relations over the years and the even more questionable racist history of professional wrestling.

But time heals all wounds, at least when you’re a famous white guy who can move some merchandise, and Hogan is now back in the fold. When the company announced that he was back in the Hall of Fame, Hogan also showed up backstage at a Monday Night Raw event in Pittsburgh, sparking rumors that he would either be on the show or that the company had plans to bring him back into future programming.

Just met with the @WWE Superstars and on all levels the volume of love and support was overwhelming. I’ve been praying for this day and I finally feel like I made it back home. Only Love 4 the #WWEUNIVERSE brother HH

It’s unclear how much WWE crowds would cheer or boo Hogan if he did randomly appear, which is a whole other discussion. More importantly, many wondered how the current wrestlers, especially people of color, would feel about someone who once said, “I’m a racist to a point, y’know, f—ing n—–s” being back in the company and working alongside them. Especially considering that we’re not that far removed from the “Black Excellence Era” when a large portion of the company’s championships was held by African-American wrestlers.

The New Day, which consists of Kofi Kingston, Xavier Woods, and Big E Langston, released a statement on Wednesday that probably sums up their feelings about as well as anything could.

The full transcript, via Cageside Seats…

“To the WWE Universe and whoever else it may concern:

This will be the only statement we will make regarding Hogan’s reinstatement into WWE’s Hall of Fame. We do not wish to spend the energy debating the point, because between our kids, our external ventures, and this job, our energy is spread thin enough already, lol.

We are only writing this simply to provide an answer to the many who have bombarded us with questions on where we stand on the issue.

We preface this statement by emphasizing that this is our own opinion and may not necessarily reflect the opinion of anyone else affected.

How do we feel? Indifferent. We are not happy, or sad, angry or resentful. Who WWE puts into the HOF is totally and completely up to the company and from a career standpoint, there is no argument on whether or not Hogan should have his place. We have no problem with his re-induction in the slightest degree. It is impossible to even begin to mention the history and evolution of the business without mentioning his name and accolades.

On a personal level, when someone makes racist and hateful comments about any race or group of people, especially to the degree that Hogan made about our people, we find it difficult to simply forget, regardless of how long ago it was, or the situation in which those comments were made. But we also do not respond with more feelings of hate. Instead, we just do not associate with the people who convey or have conveyed this negative and hurtful mindset. This instance will be no different. Perhaps if we see him make a genuine effort to change, then maybe our opinion will change with him. Time will tell.

Through the course of our lives, people have used racist comments towards us and it doesn’t feel good. But if we stopped moving forward every time we were met with prejudicial hatred, then we would have never achieved our current accomplishments.

We know we are worth it, we know our kids are worth it, and most importantly, we know that people that look like us are worth it and always have been. There isn’t a person on this planet who will be ever be able to say anything to make us think otherwise because we believe in ourselves as a people and don’t need anyones approval on that, regardless of who they are.

Having said that, his reinstatement won’t change anything for us. It will have zero effect on our ability to perform or the level of effort we will put into doing what we love to do, and that is: To deliver an entertaining product each week for our fan base.

‘Never trade your authenticity for approval.’”

Fellow WWE star Titus O’Neil also shared his appreciation and support for the statement. It had been rumored that O’Neil had left the building in protest on Monday but he has denied that claim.

In FULL AGREEMENT AND SUPPORT OF EVERYTHING SAID IN THIS STATEMENT. MY additional response to this from to follow as there have been NUMEROUS ERRONEOUS reports on my Views and Response-to this situation. https://t.co/jCjtAusYW9

Mark Henry said that he spoke with Hogan backstage on Monday and appreciated hearing from the man but hopes the dialogue will continue.

“…when talking to him yesterday he’s willing to. I was very optimistic after talking to him. He’s like, ‘Mark I’ll do whatever. Because I want people to see my heart not what I said anymore. It’s an embarrassing thing. I go places and I see people giving me a look I’m not used to getting and it’s been that way since that time.’ He said, ‘I can’t live with it like that. I gotta fix it.’ And I was like, ‘great, you’re willing to fix it? I’m willing to help.'”

We’ll have to wait and see what WWE’s plan are for Hogan. With SummerSlam approaching, all signs point to his involvement. Will fans boo the former face of the company or will he be welcomed back with open arms? We don’t know. Will he be involved in some kind of cringy plotline that aligns him with African-American wrestlers in order to turn his racism into profit? Almost certainly.