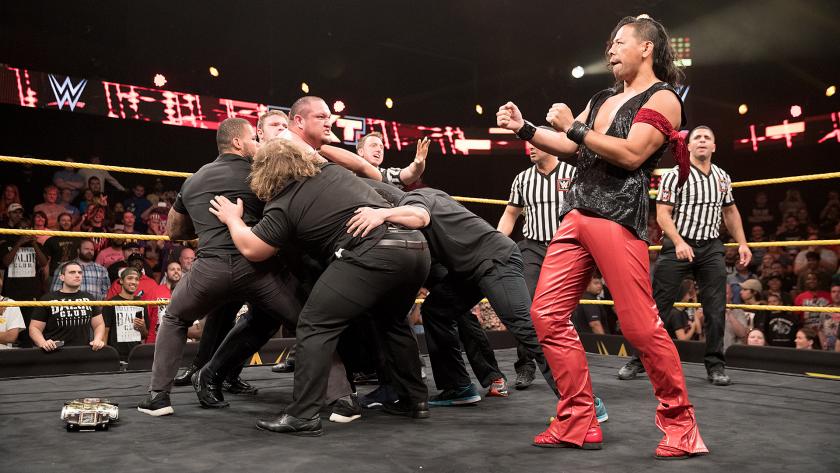 There’s a lot of WWE content available for wrestling fans every week, but the highlight of most weeks takes place Wednesday nights on WWE Network with the weekly airing of NXT as well as the Cruiserweight Classic.

The best thing about NXT, as well the Cruiserweight Classic, is that they even exist in the first place. If you would have told me things would have been like this five years ago, I would have thought you were crazy. However, thanks to the WWE Network, as well as the vision of Triple H – who is in charge of both entities – they are doing a tremendous job of offering up different, exciting content for the diehard WWE fanbase.

There has been a developmental system in place going back two decades, but the way they are doing things now is way better than it has ever been done before. WWE is using the NXT brand as a way to develop new characters, integrate others from different companies, and feed them to the main roster when they are ready. In addition to that, NXT has become its own touring brand with shows taking place all around the world nearly every weekend.

With the Cruiserweight Classic, WWE is offering up something unique – a sports-style tournament where there are no storylines in place. It’s all about putting on great matches as they attempt to resurrect a cruiserweight division that will be featured on Raw this fall.

It’s time to step away from the ongoing brand split of Raw and SmackDown to focus on NXT’s next huge show, as well as the greatness that is the Cruiserweight Classic.

A Look at NXT Takeover Brooklyn on August 20 Next Saturday night at the Barclays Center in Brooklyn, New York, the NXT brand will have a major show with three titles on the line, along with a dream match main event. It may have a tough time topping last year’s show, which was arguably the greatest NXT event in WWE history, but the potential is there for it to be an outstanding event once again. This is a dream match because both guys have had such outstanding careers before they came to WWE. Samoa Joe made a name for himself in Ring of Honor and TNA Wrestling before debuting in WWE last May. Since then, he’s been elevated from a midcarder to a title contender, then a title winner and now he’s defending against the undefeated Nakamura.

WWE has done a great job of booking Nakamura as a big deal from his first match back in Dallas in April (the WWE match of the year against Sami Zayn). He’s undefeated, so the question becomes: Will the evil champion Joe end his streak or does the ridiculously popular Nakamura leave with the title?

No matter the result, I can’t begin to put into words how excited I am to see this match. The Japanese “Strong Style” of wrestling is something that Nakamura has mastered. Joe is also known as one of the hardest hitters in American wrestling and if you saw his match with Japanese legend Kenta Kobashi about a decade ago, then you know what I mean. This is going to be a hard-hitting matchup unlike anything we have ever seen in WWE before. I expect them to get plenty of time as the main event and for it to be one of the best matches of the year.

My pick for the match is Nakamura. I just think WWE is going to want to keep him in NXT for a bit longer than Joe even though he should have been on the main roster four months ago. Joe should have been on the main roster too, but WWE wants to keep the NXT brand strong. After the match, there should be plenty of speculation about Joe going to Raw or Smackdown soon after. Maybe they’ll save Nakamura’s main roster debut for the Royal Rumble. I hope it’s sooner. The Winner: Shinsuke Nakamura

This is a rematch from the NXT Takeover show in Dallas from April. That was a great match where Asuka continued her undefeated run by beating Bayley clean for the title. This is Bayley’s long-awaited rematch and likely one of her last matches in NXT. Bayley has to be on the main roster soon, right? It makes a lot of sense, especially after the great reaction she got at Battleground as Sasha Banks’ partner.

Asuka keeping the title makes sense because they are building her up to be a great champion. She’s such a talented performer that is showing some heel tendencies as a way to put over her aggressiveness. Bayley’s always going to be the face character because that’s her strength. I’m expecting another really good match like they had in Dallas. In the end, Asuka keeps her title as Bayley puts her over on her way out of NXT. The Winner: Asuka The tag team division has lost a lot of teams to the main roster this year, but credit the NXT creative team for building this match up so well. The champions are old-school heels that talk about how they’re all about fists, not flips. I’m really impressed by their technical wrestling skills.

Gargano & Ciampa are the energetic face team that has worked hard to get to WWE after long careers in the indies. It’s an easy story to tell. I’ve heard good things about their live event matches as well, so this should be awesome like most NXT tag tile matches are. I’m going with The Revival to win, although it wouldn’t shock me if I’m wrong. This feud feels like it will continue post-Takeover as well. The Winners: The Revival

This is Roode’s first televised match in NXT after sitting ringside at the April NXT event in Dallas. He’s wrestled many live events in the last few months. Almas had a lot of hype, but he really hasn’t gotten over with the crowd the way management likely wanted. I think Roode should win his debut, while they probably put him as a main event opponent against Nakamura in the near future.

Before I move on, I have to mention that Roode’s “Glorious” theme song is outstanding. One of the best songs in WWE right now along with Nakamura and AJ Styles. It’s very catchy already. The Winner: Bobby Roode Austin Aries vs. No Way Jose

Aries, like Joe and Roode, is a former TNA World Champion that WWE signed in his late 30s to put on some great matches in NXT. No Way Jose is a young guy with a bright future that WWE has high hopes for, so it makes sense to do this match after Aries attacked him following a dancing session. The match could go either way, but I’m leaning towards Aries. They can build to a rematch with Jose winning that one. For now, Aries should go over. The Winner: Austin Aries

It’s the debut match for women’s wrestler Ember Moon. She’s an experienced worker that was trained by Booker T in Houston. They have high hopes for her, so she’s getting a lot of attention for her debut. I’m not sure who she’ll be against, but it should be an easy win for Moon. The Winner: Ember Moon

That’s the lineup. I doubt they are going to add more matches because typically the NXT Takeover shows have five or six matches with a runtime that lasts a little over two hours. I think it should be a great show thanks to the top three matches likely delivering as some of the best matches this year.