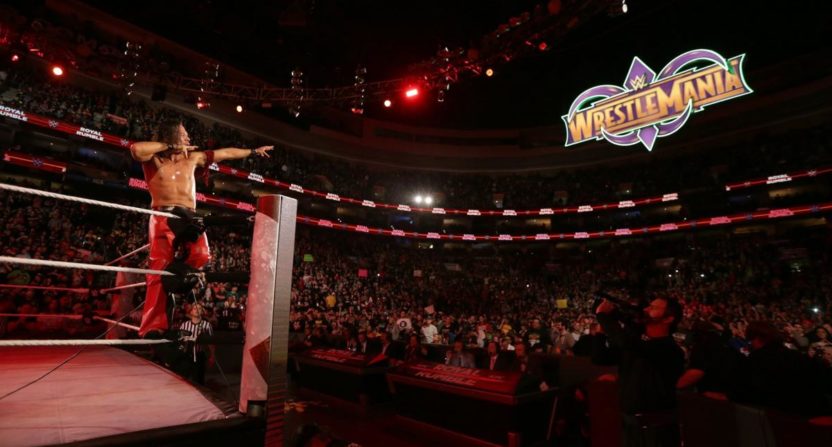 The second WWE brand-split took place in July 2016 with the intention of splitting WWE’s loaded roster into two. Seth Rolins was the top pick for Raw while Dean Ambrose was the top pick for Smackdown, while the WWE Universe was told that you will only be able to see Raw’s stars on the red brand while Smackdown stars will be on the blue brand.

But in April 2017, WWE changed direction again with a “Superstar Shake-up” that moved some stars from Raw to Smackdown and vice versa. It’s expected that there will be another Superstar Shake-up post-WrestleMania this year as well, although WWE hasn’t announced anything yet.

There’s also going to be a change in terms of how WWE conducts its pay-per-view events. While this isn’t official yet, there are reports from PWInsider and the Wrestling Observer noting that starting with the May 6 Backlash pay-per-view (the first PPV after WrestleMania), both Raw and Smackdown superstars will appear on every PPV.

Here’s an email that ticket holders for Backlash in Providence, Rhode Island received.

This is just a friendly reminder about your event.

WWE Presents Backlash Prudential Center Sunday, May 6th at 7:30PM This will now be a combined Pay Per View with RAW and SMACKDOWN Superstars.

Questions? Please reply to this email, or get answers right now. Thanks for being a fan! Ticketmaster Fan Support.

When WWE’s 2018 PPV schedule was released last November, Backlash was originally going to be a Raw show. The only PPVs this year that were supposed to feature both Raw and Smackdown wrestlers were the Royal Rumble, WrestleMania, SummerSlam and Survivor Series (known as the “big four” by WWE fans), as well as Money in the Bank in June. However, those plans appear to have changed.

It was noted by Dave Meltzer of the Wrestling Observer that “an announcement was forthcoming” from WWE about the PPV change, but there hasn’t been an official comment on the changes yet.

Why the change in WWE’s PPV plans? Part of the reason for it is because ticket sales for the brand-exclusive PPVs are going slow. For example, Raw’s next pay-per-view is called Elimination Chamber on Feb. 25 in Las Vegas. It’s been reported that they have sold about 8,000 tickets thus far in an arena that can hold 18,000 people.

That’s part of the reason why WWE announced Ronda Rousey as part of the Elimination Chamber PPV when she signed her contract with the Raw brand. That might boost ticket sales a bit, but WWE must feel that the best way to help these PPVs in the future is to feature Raw and Smackdown talent on every show.

The news is discouraging to me because I like the brand extension and how it doesn’t feel like anybody is overexposed. By having everybody on the roster being able to work every PPV, it’s going to hurt the midcard talent that is trying to break through to that next level.

Instead of seeing younger talent get a chance in a PPV setting, there will be more multi-man matches while the likes of Roman Reigns, John Cena (when he’s around), AJ Styles, Seth Rollins and others are going to dominate the shows. I like all of those guys and there are few people in WWE I don’t like, but I also want a break from some of them when I go to watch a PPV.

Think of the titles on the main roster in WWE right now. There are seven of them. There’s no reason why all of them have to be defended on every PPV. But most of them likely will be, so that’s going to limit the number of people who get matches. I feel bad for the midcard wrestlers on the men’s and women’s sides because of how difficult it might be to get a PPV match.

I don’t think this is going to change anything else about the brand extension. It’s absolutely necessary that WWE keeps the brand extension going because the roster is way too big to have only one group of wrestlers on both shows. If the company abandoned it, that would really hurt the Smackdown brand — like it has in the past.

It’s just sad that we aren’t even two years into this brand extension and WWE is already giving up on brand-exclusive PPVs. I think the problem is the creative team. They repeat multi-man matches way too often (Elimination Chamber has seven-man and six-woman Chamber matches and Fastlane has a five-man main event at their next two PPVs), and those kinds of matches don’t draw fans to the shows when they happen on a regular basis.

We want to see one-on-one matches. They have always proven to be the best draw in the wrestling business.

There could be an announcement from WWE soon or they may choose to wait to do that. Since they haven’t denied the reports, which they tend to do when things are wrong, this looks like it is going to happen.  Here’s hoping it works out for the best, but I have my doubts that this is the right decision by WWE.