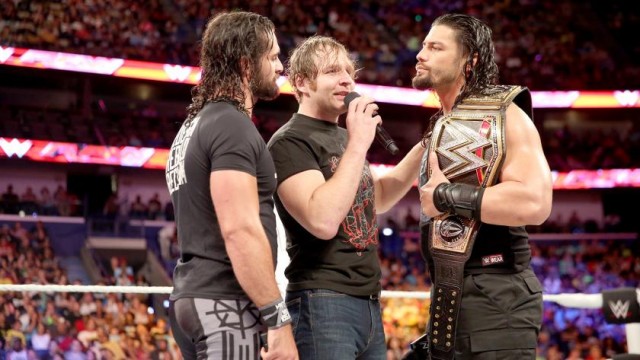 This week’s edition of Raw was a show built around a lot of trash talk as the former Shield trio of Dean Ambrose, Seth Rollins and Roman Reigns were together again. Plus, John Cena and AJ Styles signed the contract for their epic showdown at Sunday’s Money in the Bank pay-per-view.

The former Shield members interacted on the Ambrose Asylum talk show segment. Rollins talked about all the good times they had together as a group, but then he bragged about all of his accomplishments after he turned his back on their friends.

The WWE Champion Reigns simply talked about how Rollins ended their good thing because he’s a selfish guy. Now Reigns is the champion and Rollins, who feels like he should be the champ since he never lost it, has to prove he’s the better man. It’s a feud that works because of their history, along with each man’s desire to be the best. That’s why the titles are there.

Ambrose inserted himself into the mix by pointing out that he could win the Money in the Bank briefcase this Sunday and if he does, he might just cash in on Rollins or Reigns later in the night. It teased the idea that a Shield triple threat match could be coming soon. It’s never happened before, so would be intriguing to most fans. I’d rather see WWE save it until WrestleMania, although I could see why they might do it earlier.

Rollins ended up attacking Ambrose from behind, then they all started brawling a bit, Reigns hit Rollins with a Superman Punch to knock him down, and Ambrose gave Reigns the Dirty Deeds DDT to knock down the champ. It ended with Ambrose standing over the two men battling for the title on Sunday.

As for Cena and Styles, they had the best segment on Raw for the second week in a row. Cena started it off by praising Styles’ work in other organizations in the last few years. He specifically mentioned PWG, ROH and New Japan. He didn’t mention TNA Wrestling, which is where Styles was the face of the company for 12 years. That’s just WWE continuing to ignore TNA. That’s what they always do.

A current TNA star that used to be a big name in WWE, Matt Hardy, mentioned it on Twitter.

I just heard someone bill @AJStylesOrg as a phenomenon from PWG, ROH & New Japan.

I think he was in @IMPACTWRESTLING 12 years also.

Cena presented Styles with two options for their match. He could either sign a contract that makes it a regular one-on-one match with The Club not at ringside or a deal with The Club appearing by Styles’ side. Styles took it to mean that Cena doesn’t believe in Styles ability to beat him, so AJ signed the deal without The Club at ringside. Does that mean Styles will be alone? We don’t know for sure.

Their promo worked, just like in the last few weeks, because they mentioned things like Styles wanting to prove himself against WWE’s biggest name in Cena. It also helped that Cena talked trash to him and called him a “bitch,” while Styles made fun of Cena’s K-Mart clothes line. Cena also pointed out Styles saying the same things that other wrestlers said to him when they got to WWE. I just really liked how you could see things from both men’s perspective very easily. That’s when promos are their most believable.

I think WWE has been really smart by not putting Rollins or Cena in a televised match since they returned in the last month. Why give it away on free TV? Fans will have to tune into Money in the Bank on Sunday night to see if they are back physically. Rollins has been working live events for the last couple of weeks so he’s fine, but Cena has not. Both of them should be on their games this Sunday.

Both Reigns vs. Rollins and Cena vs. Styles are WrestleMania-worthy matches, as WWE has said numerous times in the last month. They were built up well on this week’s episode of Raw.

Here’s a rundown of this week’s matches on Raw with quick notes on each:

The four teams are in the Tag Team Title match at Money in the Bank, so of course they did an eight-man tag. It was a clever way to put over Anderson and Gallows as they double-teamed Kingston to get the win. Solid match.

But it took 80 minutes to get to the second match on the show. That’s a long time to wait.

A short match that Paige won in about three minutes when Charlotte’s buddy Dana Brooke rolled Charlotte back into the ring, even though she wasn’t ready. Why should we care about women’s matches if WWE doesn’t give them time to tell stories? This felt incredibly rushed. I feel bad for the performers.

Another short match with Sheamus winning in about two minutes. Post-match, Apollo Crews saved Ryder from an attack. It’s Sheamus vs. Crews at Money in the Bank on Sunday.

A clean win for Zayn in a match that was too short at eight minutes. They are two of the best in-ring performers in the company. WWE should have cut some of the promos out and given them at least 12 minutes to tell more of a story. Zayn won with an incredible sunset flip into a Powerbomb. These guys are amazing.

If Del Rio & Owens lost, they would have been out of the Money in the Bank match. That’s not a believable stipulation. The heel team of ADR & KO bickered a lot, but they won with KO hitting a Popup Powerbomb on Sin Cara. Post-match, Del Rio nailed Owens with a cheap kick to the head.

This was the main event on Smackdown with Jericho getting the win there, so they gave Ambrose his win back. That’s the 50/50 booking which exists in WWE that I tend to complain about because it doesn’t help anybody. It’s hard to build somebody up if they are trading wins all the time. Ambrose won clean with the Dirty Deeds.

1. Raw started with the WWE roster standing on the ramp in a moment of silence for the 49 people that were murdered in Orlando at the Pulse nightclub on Saturday night. It was classy of WWE to do that because it’s been on a lot of people’s minds since it happened. Entertainment shows like this are a way for us to not think about these things for a few hours, but it doesn’t erase it from our minds either.

The majority of the WWE roster lives in Florida as well. The company’s Performance Center is in Orlando, so anybody that trains there now or has gone through training lives in that area. Many other wrestlers live in Tampa, which is where a lot of wrestlers have lived for many generations. Florida weather is great all year round, so it’s easy to see why they are there.

2. There was too much talking and not enough action during this show. Way too many backstage segments with Shane and Stephanie McMahon. Last week, they had Teddy Long trying to get a job making matches. This week, it was Corporate Kane. He came up with a match during the show that Shane liked (Owens and Del Rio teaming up), but then Kane was told he won’t be running Smackdown.

Some of the writing in WWE is pretty bad because they don’t care about the minor details. There was a backstage segment where Kevin Owens said (during the middle of the show) that Del Rio had just arrived 20 minutes earlier. Meanwhile, Del Rio was shown on the stage at the start of Raw standing beside his real-life girlfriend Paige. Do the writers that come up with this stuff even write the show or are they oblivious to these details? It’s not that hard to get this stuff right.

WWE has done a poor job of providing us with details regarding the brand extension. Shane and Stephanie argue about who gets to run what show, but there’s no indication when there might be an answer. My guess is they’ll get into more specifics following Money in the Bank.

3. The build up for the Money in the Bank ladder match has been pretty good. You may recall that a few weeks ago, they announced seven people in the match. Then they settled on six names: Cesaro, Zayn, Ambrose, Owens, Del Rio and Jericho. In the last month, it seems like WWE has tried every combination of singles and tag matches to push the match hard.

To end this week’s Raw, Zayn hit a somersault dive off the top rope to take out four guys on the floor. That led to Jericho climbing the ladder to retrieve the briefcase. Is Jericho winning on Sunday? It’s highly unlikely, but that visual of somebody climbing the ladder on TV has been done several times in the past month.

It’s the third biggest match at Money in the Bank and it may be the best. Who’s going to win? My best two choices are Owens and Ambrose, but I’d love to see Zayn or Cesaro too. I doubt Jericho or Del Rio will win. I’ll have more thoughts on it in the preview later this week.

Looking Ahead To Money in the Bank

The WWE Money in the Bank event takes place this Sunday, June 19 in Las Vegas. Here’s the lineup.

Money in the Bank Ladder Match: Kevin Owens vs. Dean Ambrose vs. Sami Zayn vs. Chris Jericho vs. Cesaro vs. Alberto Del Rio

Tag Team Title Match: The New Day vs. The Vaudevillains vs. Gallows & Anderson vs. Enzo & Cass

US Title: Rusev vs. O’Neil

WWE could add another match or two, because six matches on the main show does seem a bit light.

Whenever there’s a “go home” show prior to a PPV, it’s going to be promo-heavy. That’s what this week’s Raw was. There was a lot of talking in the ring, as well as backstage. That’s because WWE wants do what they call a hard sell for the big matches. Since I thought the promos for the two big matches at Money in the Bank were above average, I’d say that WWE was successful in accomplishing their goal in terms of that hard sell.

Money in the Bank takes place this Sunday night in Las Vegas and it’s available on WWE Network with a Kickoff Show starting at 7 p.m. ET. Look for my in-depth preview of the full card on Friday right here at The Comeback.