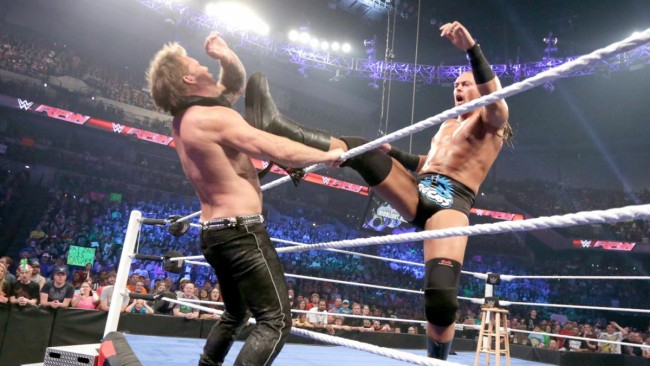 There was a different feel to this week’s Raw as legendary performer Chris Jericho started things off with his Highlight Reel segment, only to be confronted by WWE main roster newcomer Big Cass. The night ended badly for Jericho as his $15,000 bright light jacket was destroyed by rival Dean Ambrose.

With these words, Cass showed that WWE has a lot of confidence in the big man: “Consider this a warning – I have arrived.”

Big Cass is the man that was known as Colin Cassady in WWE’s developmental system (first FCW, then NXT) since 2011. Apparently, they have dropped the Colin Cassady part of his name because on Raw, he was only called Big Cass and that’s what the display name said as well. It’s easy to see why they would want to do that because it’s cooler to have a nickname like that, rather than some generic sounding name.

In Big Cass, Vince McMahon is likely seeing dollar signs dancing in his head. Any WWE fan knows that Vince has always loved the bigger wrestlers. In his mind, fans will want to pay more money to see the guys that are seven feet tall instead of the average looking 5-foot-10 guys that you could see at your local grocery store. It’s why Andre the Giant is one of the biggest stars ever. He didn’t have a good moveset and didn’t sell moves well, but who cares? The man was a freak of nature. That’s all that matters sometimes.

Looking at WWE’s current roster, they are in need of the tall guys. For the past 20 years, The Undertaker and Kane (both of whom are nearly seven feet tall) were two of the most dominant big men in WWE history. The Big Show is a legit seven-footer who played college basketball at Wichita State. The problem is that they are old. Undertaker is 51, Kane is 49 and Big Show is 44 years old. If any of them are wrestling in the next two years, it would be a surprise. Sorry Great Khali fans, but he’s not coming back any time soon.

Big Cass, who is a native of Queens, New York, is a pretty good talker as he showed on Raw. Yes, his currently injured tag team partner Enzo Amore is a better promo man. But as Enzo reminds us, a seven-footer like Cass is rare because… you can’t teach that. As long as Cass works his ass off to continue to improve in all aspects of the business, he’s going to find a lot of success.

During Jericho’s show-opening Highlight Reel segment, it was Cass that interrupted him. They haven’t interacted before, but it was WWE’s way of showing confidence in Cass by putting him in the ring with one of WWE’s greatest performers ever in the opening segment. Cass let Jericho know he was sick of hearing him brag about how good he is and challenged him to a fight. Jericho didn’t want to do it, but he was forced into the match by Stephanie McMahon.

It was interesting to see WWE spend the whole show promoting this Jericho vs. Cass match in the main event spot. Would they really put this main roster “rookie” in a main event match already? Well, in terms of show placement they did, but then they didn’t really have a match.

When Jericho made his entrance for what we thought was the main event, Dean Ambrose attacked him. Ambrose wore Jericho’s jacket in the ring and then destroyed it. When Jericho finally got his hands on the jacket to try to preserve it, Cass was there to toss Jericho back in to Ambrose. It ended with Ambrose destroying the jacket some more to the point that Jericho was left alone in the ring complaining about the death of his $15,000 prized possession. Why did Ambrose do that? Because Jericho attacked him last week with “Mitch” the plant. Oh wrestling business, you’re just so wacky.

Despite being advertised in the main event of the show, there was no Jericho vs. Cass match. We couldn’t see what Cass could do with Jericho, although it’s likely WWE will do the match next week on Raw or possibly Smackdown.

While WWE may annoy most of us by saying it’s a “new era” about 25 times per episode of Raw, they are showing some faith in their big guy of the future, Big Cass. Don’t be surprised if he is main eventing in an actual match very soon and when he does, he could cement himself as a key building block of the future.

Here’s a rundown of this week’s matches on Raw with quick notes on each:

A clean win for Corbin, who has manhandled Ziggler for two months. While Corbin isn’t as tall as Big Cass, he’s another “new” big guy that WWE management is likely very high on. He definitely has a bright future. As for Ziggler, once again he’s in a spot where fans are going to want him to do more. Management just doesn’t feel that way. What a shame.

It was just a short match where Truth got the win. A meaningless match that’s part of a storyline which also involves Goldust and Tyler Breeze.

Paige won this non-title match because Charlotte’s dad Ric Flair went to ringside, even though he was banned. Shane McMahon came out with referees to get Flair out of there, which led to Paige pinning a distracted Charlotte. It sucks when champions lose non-title, but as this show proved, WWE loves that finish. Good match.

This was the match of the night, while Miz was another champion that lost. It was competitive with both guys getting a lot of offense in. Zayn made the great comeback at the end and won clean with the Helluva Kick. The win means Zayn gets a IC Title shot at Extreme Rules against Miz, Kevin Owens and Cesaro in a fatal four-way.

The outcome was a bit of a surprise, since Rusev is getting a US Title shot against Kalisto at Extreme Rules. Instead of booking Rusev strong, they had him lose to a guy that rarely wins. I still think Rusev is winning the US Title.

It came down to Reigns vs. Styles. They were outside the ring when Anderson attacked Reigns with a cheer. The ref disqualified Styles’ team for it. That led to a really good sequence where all six guys got involved again, and ended with Styles avoiding an attack from Reigns.

Ryder was given the match by Shane because he wanted a IC Title shot. He had to beat Owens to get it. Owens ended up stopping him pretty easily in less than five minutes.

Here’s the third non-title match where the champion(s) took the loss because D-Von pinned Kofi after interference from The Vaudevillains. It could lead to a future title shot for The Dudleys.

That was all for the matches. If you missed the show, I think Zayn/Miz was the best match and the Reigns/Styles story was furthered well, even without the clean finish.

1. In this week’s “As The McMahons Turn” update, Stephanie worked well with brother Shane as they made matches together all night long. Shane was surprised by it, while she never seemed to crack or change her tune.

Where is this story headed? Probably leading to her gaining Shane’s trust, then turning on him and ending up with her as a corrupt heel as she’s been for much of her career. That’s her best role. She’s really good at it. I get the feeling that her husband Triple H will be back in the picture soon, so that’s part of it too.

2. While this show was a bit better, in terms of having matches that meant something, some of the finishes bothered me.

Paige beat Charlotte with a rollup after a distraction.

Sin Cara beat Rusev with a rollup after Kalisto kicked Rusev in the head.

Then in the elimination tag, Anderson got a pin with a rollup — although at least he used the tights, since he’s a heel.

Don’t the agents who put together the matches realize that if you do the same finish three times in the same show, it hurts the matches? They do that damn rollup, which I’ve renamed the ROLLUP OF DEATH~!, nearly every show. Enough already! Think of other ways to end matches.

3. Another NXT performer made their main roster debut this week, as Dana Brooke showed up to help her NXT buddy Emma. While Emma was talking trash to rival Becky Lynch, Brooke attacked Lynch and told her that “playtime is over.”

Brooke isn’t the most ready woman from NXT, but she fit in well with this storyline due to her alliance with Emma. It’s not like they are going to call up Bayley or Asuka to put them in this spot. Brooke still has to learn more in the ring, but as a character she’s developed into a cocky heel that is physically imposing due to her background as a bodybuilder.

Looking Ahead To WWE Extreme Rules

The WWE Extreme Rules event takes place on Sunday, May 22 in Newark, New Jersey. It should be a very good show with this lineup.

Fatal 4 Way for the WWE United States Title: The Miz vs. Cesaro vs. Sami Zayn vs. Kevin Owens

Submission Match for the WWE Women’s Title: Charlotte vs. Natalya (Ric Flair is banned from ringside)

There will likely be a Jericho vs. Ambrose match as well, based on the ending of Raw. If that match happens, it would be the third rematch from Payback, along with Reigns/Styles and Charlotte/Natalya.

It wouldn’t shock me if WWE finds a way to get Big Cass a match too. Perhaps they can feed a heel like Sheamus or Alberto Del Rio to him. Other “new” performers like Apollo Crews and Baron Corbin could be in matches too.

Raw was a bit better this week than last week, although the lack of a true main event match hurt a bit. The focus really seemed to be on giving the “new” performers more TV time while the announcers drilled the “new era” phrase into our heads relentlessly.

Things are shaping up nicely for Extreme Rules, while seeds are being planted for WWE to have a very successful future in the weeks and months ahead. While guys like former Shield members Reigns, Rollins and Ambrose are obvious building blocks, don’t sleep on Big Cass and Corbin because they will be a big part of WWE’s future as well.