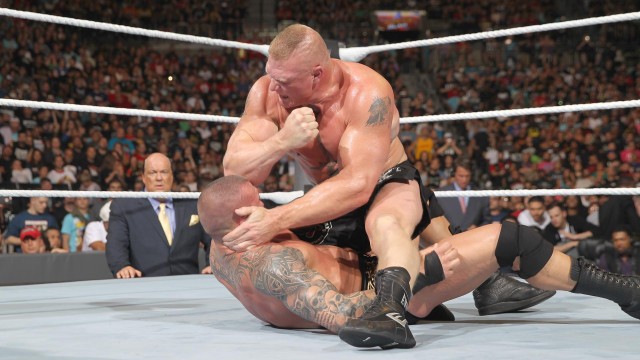 SummerSlam is one of WWE’s biggest shows of the year. This year’s event featured title changes, a match of the year contender and one of the bloodiest endings to a WWE event in a very long time.

It was a long night with the Kickoff Show starting at 5 p.m. ET and the broadcast went off the air at 11:05 p.m. ET. Since I was at WrestleMania this year, which had a run time of about six hours as well, I know what it’s like to sit there that long. It’s hard to stay alert and interested in anything for six hours, so I completely understood why the crowd was dead quiet for some of the matches.

Here’s a rundown of everything that happened in the order that it took place.

This was on the Kickoff Show at around 5:30 p.m. ET. They are six teams from the Smackdown brand in a match that took place on Smackdown. Just like on Smackdown, the face team won with Jey Uso hitting a splash for the win. The story was that Jey tagged himself in when Jordan & Gable hit their finishing move. It’s a tease for a heel turn for The Usos, which would be a good idea. A feud between Jordan/Gable vs. The Usos would be awesome while also establishing some new tag team titles on Smackdown in the near future.

It was an easy win for the exciting Zayn & Neville team. Zayn needs to be used better. The Dudleys had a miscommunication for the finish. There are rumors WWE may split the Dudleys up, so that’s something to look for.

They had a hard-hitting, competitive match that Sheamus won following an eye poke (which the ref didn’t see) and a Brogue Kick. It was the first win for Sheamus since the brand split happened five weeks ago, so he needed it. Since they are likely having seven matches, it’s smart to start out with the heel winning. I think Cesaro will win the series in seven matches.

Good choice for the opener since the crowd loved Enzo & Cass, seeing as how they are from the area (Cass is from Queens, Enzo is from New Jersey). I was surprised by the finish, but I love the JeriKO team, so I’m happy they got the win too. I just thought that Enzo & Cass are more of the long-term tag team, which should have meant a win for them. There will likely be a rematch soon because I think this story is about putting over Enzo & Cass in a big way.

They had Jon Stewart show up in a backstage skit with the authority figures on Raw and Smackdown. Not much to it, other than New Day taking Stewart and his son to hang out with them.

Here’s a match result that really surprised me. It’s rare for a former champion to win the rematch, but that’s what Charlotte did. The match wasn’t as good as their classic match on the July 25 edition of Raw although it was still cool. I loved a spot they did where Charlotte went for a Powerbomb, but Banks turned it into a top rope hurricanrana. For the finish, Banks had the Bank Statement submission locked in, Charlotte turned it, went on top of her and pinned to win after about 15 minutes.

As for Banks, reports came out Monday morning that she has a back injury that will put her out of action for at least one month. She’s getting more tests done in early September. Hopefully, she can return soon because her title reign was cut short due to the injury.

The Miz defeated Apollo Crews to retain the Intercontinental Championship

The crowd didn’t care about this match, which is no surprise because there was a poor build going into it. Miz ended up winning by avoided a corner attack and hitting his Skull Crushing Finale finisher to win in about six minutes. It was about the shortest match of the night. A very forgettable IC Title match.

This was the match of the night and one of the best WWE matches of the year. I know the “phenomenal” word is used too often with Styles, but that’s what this match was. They had a really competitive match where each man got many believable near-falls and the crowd was into it the whole way. Cena kicked out of the Styles Clash and Styles kicked out of the Attitude Adjustment. The submission holds nearly won the match too.

Then there was the big spot where Cena did the AA off the middle ropes, but Styles kicked out. That’s the move which beat Styles in a tag match at Battleground last month. Styles came back with a second Styles Clash as well as Phenomenal Forearm for the clean win after 23 minutes of incredible action. Amazing match that every WWE fan should watch.

From a booking perspective, the right guy won. It’s the second time that Styles beat Cena on a pay-per-view because he beat him at Money in the Bank in June, although that was a cheap win. It’s so rare to see Cena lose clean, but it was the smart decision because it sets up Styles to become the next challenger for the WWE World Heavyweight Championship. I think Styles has been the best wrestler in WWE this year and he’ll probably beat Dean Ambrose for the WWE Title within the next two or three months. Cena’s expected to start filming for Fox’s American Grit season two very soon. He left his “Never Give Up” arm band in the ring after the match.

Why did @JohnCena leave his armband in the ring at #SummerSlam? Tell us using #CenaArmband: https://t.co/GEwIOtz87j pic.twitter.com/6AKJ3F2ZCD

My choice for WWE Match of the Year remains Shinsuke Nakamura vs. Sami Zayn at NXT Takeover Dallas back in April. Styles vs. Cena is the second best match of the year, just ahead of Zayn vs. Owens from Battleground.

As a final note, Cena has lost every match he’s had at SummerSlam since 2011. He doesn’t lose that often, but he does at SummerSlam.

CLICK HERE FOR THE REST OF THE SUMMERSLAM CARD >>>