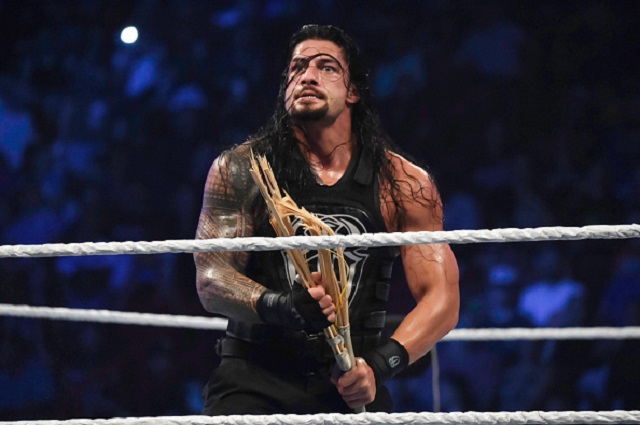 The Roman Empire is crumbling fast.

Two days removed from losing the WWE title in a shocking manner, WWE golden boy Roman Reigns has been suspended for 30 days following a violation of the company’s wellness policy.

Reigns issued a statement on Twitter regarding his suspension: “I apologize to my family, friends and fans for my mistake in violating WWE’s wellness policy,” Reigns tweeted. “No excuses. I own it.”

It’s Reigns’s first violation and a 30-day suspension is standard. The company’s policy is an independently-administered testing system that covers substance abuse and drug use, amongst other things.

The immediate question that fans have is when, exactly, did the WWE know that this violation had happened?

On one hand, it would explain why Reigns lost the WWE title only two months after winning it at Wrestlemania. Championed for over a year as the face of the company, it seemed like a shockingly fast change to see WWE end a title run they had built up to for so long. Knowing that he was about to be suspended, they could have taken the title away from Reigns within the context of the story instead of by some kind of awkward title vacation.

On the other hand, if they knew Reigns was about to be suspended, why book him for the main event of your next PPV the night before? Reigns is now scheduled to face WWE champion Dean Ambrose and Seth Rollins in a triple-threat match at Battleground, which takes place July 24 (34 days from now, if you’re keeping track). Shouldn’t they have set up some kind of attack where Reigns gets “hurt,” explaining why he’s not around to promote this huge match for the next month? It puts them in an awkward spot to now have to deal with his absence, assuming he’s still going to appear in that match.

Regardless, WWE cannot be happy with this development given how much time and energy they’ve invested in Reigns, especially in the face of fan backlash. It’s a bad look for him and a bad look for the company. Vince McMahon is not known for being a very forgiving man to talent who don’t back up their bad behavior, so we’ll have to see how Reigns is used when he does return to find out whether or not his mega-push continues.

Or, perhaps, this is one more thing that the WWE and Reigns can use to make the logical switch into becoming a heel and starting to re-develop the character into someone fans might actually want to root for.

UPDATE: According to one report, WWE knew about Reigns’ failed test before Money in the Bank.

According to @davemeltzerWON audio show: "They knew before Money in the Bank on Sunday." @WONF4W