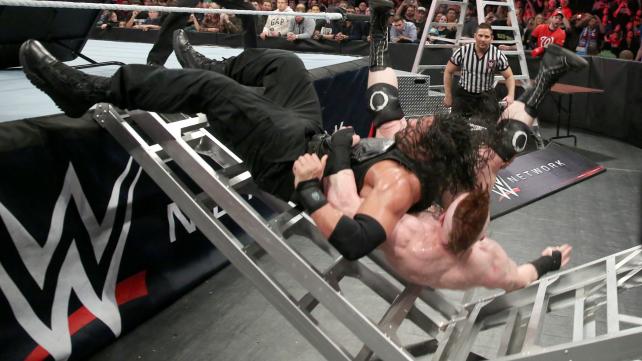 The final WWE pay-per-view event of 2015 – the appropriately named Tables, Ladders & Chairs – took place last night in Boston. It will be remembered as a good night for the villains while also perhaps as the event where Roman Reigns finally broke through as “The Man” in WWE going forward.

The concept behind TLC is that one of the matches allowed for Tables, Ladders & Chairs as weapons, another match was Chairs Match with chairs as legal weapons, there was a Tables match with elimination rules and then the Ladder match where the winners had to retrieve the tag team titles that were hanging from the ceiling.

It’s one of those that is tough to understand for non-wrestling fans, but true WWE fans love a night like this because they know there’s going to be violence. We all know that the outcomes are pre-determined, yet the bumps that the performers take are all too real. This is arguably the worst year in WWE history in terms of injuries and a show like this could lead to more although thankfully no major injuries occurred.

Here’s a rundown of all the matches with thoughts on each and the explosive post match attack that could lead to something huge down the road.

There was no build to this match since WWE sometimes doesn’t care to give their divas a storyline. Banks won thanks to the distraction by her “Team B.A.D.” allies Tamina Snuka & Naomi while Lynch had nobody there to support her. Banks is a future top diva in WWE. It wouldn’t be a shock if she wins the Divas Title at WrestleMania.

This was the match of the night in my humble opinion. One of the best of the year too. It’s not always easy to think of fresh spots in a ladder match because there have been so many of them over the last twenty years, but they had plenty of wow moments. The biggest spot was when Kalisto did his Salida del Sol flipping neckbreaker off a vertical ladder onto a horizontal ladder that sent Jey back first into a ladder.

Following that huge moment, The New Day were able to cheat their way to victory as Xavier Woods (who was on commentary in the match) tossed his trombone at Kalisto when he was about to win. That led to Kofi Kingston climbing up to retrieve their gold. The New Day act, which also includes Big E, are arguably the most entertaining group in WWE and should hold the tag team titles for many more months. Let’s hope they don’t break up for two or three years because they are so great together.

It was tough to follow the excitement of the previous match, so WWE put the slowest match on next. A weird choice for sure. Ryback was in control, then Rusev’s fiancée Lana faked an injury as if she was on a soccer field looking for a yellow card and Rusev capitalized soon after to win with his Accolade submission move. WWE is trying to make Rusev into a deadly heel with Lana interfering on his behalf while Ryback is just a mid-card face to put the heels over.

The outcome of this match was very easy to predict since Swagger has barely been featured this year. He went months without ever being on TV, yet suddenly WWE expected people to care about him in a title match.

They worked hard, but the Chairs Match stipulation isn’t easy and Swagger’s lack of credibility hurt in terms of fans being invested in it. In the end, Del Rio trapped Swagger against the turnbuckle and finished him off with a double foot stomp. Could John Cena be back soon to win back the US Title that Del Rio beat him for in October? That match might happen soon.

This was the most predictable match on the card. Since WWE had the Wyatt Family put over Undertaker and Kane at Survivor Series three weeks ago, they had to give them momentum by giving them a PPV win over Team ECW, which was comprised of The Dudley Boyz, Tommy Dreamer, and Rhyno.

It was noted by announcer Michael Cole that Team ECW had 95 years of combined experience. In other words, they are old, so of course they lost in convincing fashion with only Erick Rowan getting eliminated for The Wyatt Family. Look for WWE to book Bray Wyatt, Braun Strowman, Luke Harper & Rowan strongly as they prepare for the Royal Rumble in seven weeks. The story will be about Wyatt having his “family” help him win while wondering if anybody can overcome them.

This was a regular match that was also the only matchup where a babyface wrestler got a win. It was a bit of a surprise because Owens won the IC Title in September, was doing a good job as champion and the expectation was that he would hold it into the new year. Instead, WWE went with Ambrose possibly because they needed a face to win a match and also because he gets some of the loudest reactions on the show.

They went for a surprise finish with Ambrose countering the Popup Powerbomb with a hurricanrana into a pinfall for the win. There are rumors that maybe Owens will face Brock Lesnar at WrestleMania, but at this point nobody knows for sure. Getting the title off Owens could be seen as a positive in that regard because it’s not like Lesnar is going after the IC Title.

The Divas Champion Charlotte, who had her father Ric Flair in her corner, turned heel a few weeks ago and cheated all night long to beat Paige. It was an interesting dynamic in the match since Paige turned heel against Charlotte a few months and said some despicable things after it, but Charlotte wasn’t connecting as a face. That led to this match with a mostly dead crowd that didn’t know who to cheer for.

It looks like WWE will keep Ric around to help Charlotte cheat to retain the title. They worked together distract the ref and expose the middle turnbuckle in order for Charlotte to win. She’s much better as a heel anyway, so long term it should help her. It would make sense for Charlotte to turn heel in a violent way against her friend Becky Lynch leading to a match between them, which makes Lynch’s loss from earlier a confusing decision.

This was the longest match of the show with a runtime of about 25 minutes and a finish that wasn’t surprising. Since Sheamus won the WWE Title three weeks ago at Survivor Series, it would have been foolish to have him lose the gold so quickly. Lucky for WWE, this match allowed them to have a finish to the match where Reigns wasn’t pinned, so he looks strong while also earning the sympathy of the crowd.

It was a good match that was very physical with multiple tables broken, plenty of chairs used by both guys and Reigns did the move of the match when he gave Sheamus a Samoan Drop onto a ladder outside the ring. Shortly after that, Reigns looked like he was going to win because he had taken Sheamus out. That’s when Sheamus’ League of Nations allies Alberto Del Rio & Rusev showed up. Reigns was able to fend them off, but Sheamus knocked Reigns out with a Brogue Kick and then he climbed up the ladder to retain his WWE Title.

After the match was over, that’s when the fun really began. Reigns took out Sheamus, Rusev and Del Rio with chair shots. Then WWE’s Chief Operating Officer (on screen) Triple H showed up to calm Reigns down. That’s when Reigns nailed Triple H with a Superman Punch. He attacked Hunter with chair shots, gave him a Powerbomb on the Spanish announce table, which didn’t break, so Reigns put him through the table with an elbow drop. Hunter was taken out on a stretcher while Reigns received some of the loudest ovations of his career and especially in the last two years.

It was a great ending to TLC because after months of fans being frustrated by how WWE was booking Reigns, WWE finally got it right. Reigns looked a little bit like Steve Austin back in 1998/99 or Daniel Bryan in 2013/14 as he fought back against the powers that be with violence. Doing promos where he said things like “sufferin’ succotash” and “tater tots” made people laugh at him. When he attacked Triple H, the audience cheered him.

The internet wrestling community (or IWC or short), who often times are too critical of the product, are even interested in where things go next. It appears as though the direction could lead to Roman vs. Hunter at WrestleMania 32 or they may settle things at the Royal Rumble PPV before that. Either way, that’s a big match to look forward to down the road.

The 2015 WWE TLC event was a good show with smart booking decisions and an ending that was memorable. It was a bit too predictable, though. That’s partly because the creative team has done a poor job in the last few months and they just don’t do many things that will surprise us anymore.

Some PPVs this year end without much excitement. In this case, it left us wanting more and as a WWE viewers, that’s a satisfying ending we can all live with.

You can follow John Canton on Twitter @johnreport or email him at mrjohncanton@gmail.com with any comments or questions.