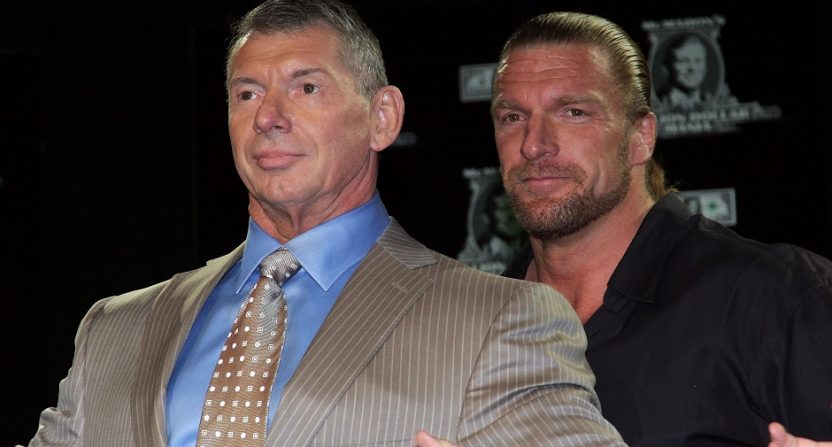 Even though he’s well into his 70s, Vince McMahon remains a hands-on part of just about every aspect of the WWE product. That obsessive attention-to-detail is a large part of the reason he’s turned a regional wrestling company into a global entertainment corporation.

However, as the years have dragged on he’s also gotten fairly out of touch at times with the trends and demands that affect his product, something most often noticed in the WWE’s archaic storylines and racist character portrayals. All of which is to say that there’s a segment of the fanbase that is itching for the day when McMahon is no longer hovering over every decision, which could give the product a much-needed breathe of fresh air instead of the same old routines.

While many have expected to see the torch passed to daughter Stephanie McMahon and husband Triple H, there is an alternative that most people would have never expected – selling the company he basically created.

Rumors of a sale happening got louder in 2016 when the UFC sold for $4 billion, prompting speculation that WWE could get even more than that on the market. Here’s what Wells Fargo analyst Eric Katz said at the time:

“Although we view this as an interesting exercise in determining the potential value of WWE — in our opinion, Chairman Vince McMahon is NOT selling the company anytime soon. But with positive Network sub trends, a clean balance sheet, new TV rights deals just 2-3 years out, and now a clear sign of demand for somewhat similar content, we are raising our valuation range to $23-25 from $20-22.

Since then WWE has expanded its media reach to Facebook and there are rumors that Vince is attempting to reboot the XFL or create something new with those assets. WWE Network continues to inch forward and the company’s TV shows remain fairly steady in the ratings. In other words, the value continues to grow.

A month after UFC’s sale, McMahon was asked on a conference call if he was open to selling. He said at the time that the door was open, with a few caveats.

We’re open to anything but I think that you know controlling your own destiny is so important. And I don’t know how much you lose control over that you know by being absorbed or sold or what have you, but again, we’re open to anything, we’re business people, so it’s not a question of if the right deal came along, it’s one of those things where if it’s a deal you couldn’t refuse, we’re listening.

There wasn’t much said about the topic until this week when, on an episode of Wrestling Observer Radio, noted wrestling journalist Dave Meltzer threw some speculation out there about McMahon’s interest in selling WWE (via Uproxx).

“There is an argument for the McMahons to sell right now, especially when you look at the interest of the key owners. Shane and Linda are already on the outside, so the sale would only give them more money, and they could have more liquid assets. Stephanie seems to be pursuing a mainstream, charitable corporate path that could be best pursued within WWE or a foundation using her own money. Only Triple H clearly has his future set on running a wrestling company.

“The odds are that if somebody buys WWE and Vince gets out, the odds are really strong that Triple H, Vince’s protege, would be the guy put in charge, because they won’t think of anybody else.”

Meltzer also noted that McMahon recently created a new venture called Alpha Entertainment, which may or may not be a pre-sale signal about his intentions.

“Vince creating his personal property for business projects is the type of thing somebody does before they sell their main company. I don’t know. For a long time, people have talked about Vince selling the company. I always thought Vince wouldn’t want to sell the wrestling company because it’s like his life. He may not, but at the same time but when that UFC sale went for $4 billion, all of a sudden the game changed. If they could get anything close to $4 billion, and they couldn’t, but I think Vince would be out in a heartbeat because the number is so big.”

“So now [Vince is] starting his own company, and if he sells WWE he would have way more money for the new company. The thing is, does Vince want to sell wrestling to fund football stuff or whatever? I know he wants to be something other than a wrestling promoter, but I don’t know if he actually wants to be not [in] wrestling. So it’s all interesting to me.”

So for now, take it as conjecture. No one has said that Vince is positioning himself to get out of the pro wrestling business and start new ventures. They’re merely pointing out that if he did have plans to do so, he is certainly setting himself up for it. Or, he might just be trying to protect WWE from whatever he does have planned, be it a new football league or something else entirely.

The idea of a WWE without Vince McMahon might seem sacrilegious, but it’s got to happen sooner or later, and perhaps Vince is getting ready to go out on his own terms.