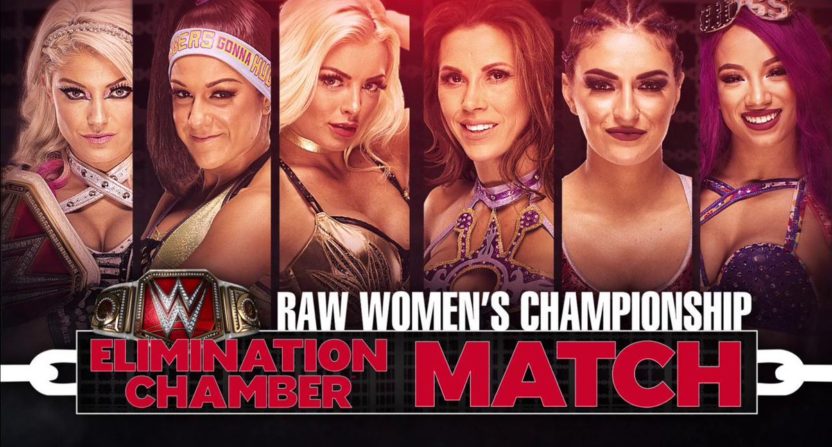 The WWE Elimination Chamber pay-per-view is the last stop for the WWE Raw brand on the road to WrestleMania. The Elimination Chamber match has been around since 2002, when WWE felt the need to create a new “demonic structure” (as they like to call it) for their superstars to compete in a unique match.

This week’s Raw provided a lot of answers in terms of who is competing in which Elimination Chamber because we know 11 of the 12 names with one more to come. We also know that Brock Lesnar, the Universal Champion, is not going to wrestle at Elimination Chamber and expected to be back on Feb. 26 edition of Raw to start the build to WrestleMania 34 on April 8. There’s no Ronda Rousey on this show either. She hasn’t been seen on WWE programming since the Royal Rumble, but she’ll probably be back on the Raw after Elimination like Lesnar.

There are only three official matches announced for Elimination Chamber thus far and I think it’s fair to say it’s a two-match show, thanks to the two Chamber matches. Here’s a breakdown of what we know so far. The first five men in the Elimination Chamber match are: John Cena, Braun Strowman, Elias, Roman Reigns and The Miz with one more spot left.

All five men won qualifying matches during the last two weeks on Raw to claim their spots in the match.

This week’s Raw main event saw Elias beat Braun Strowman and John Cena to earn the coveted sixth spot in the Elimination Chamber match. It was a cheap win for Elias where Strowman hit Cena with the Running Powerslam, Elias threw Strowman out of the ring and Elias pinned Cena. Strowman got his heat back by hitting Cena and Elias with the Running Powerslam two times each. It is WWE’s way of trying to make us forget that Strowman failed to win a triple threat match for the second time in eight days since he lost at the Royal Rumble as well.

The sixth and final spot in the Elimination Chamber match will be occupied by one of four men who lost qualifying matches to four of the guys in the Chamber. The fifth loser, Kane, is not involved because he’s storyline injured.

I think Finn Balor will win that match. He’s the biggest name and when he lost to John Cena last week, a lot of fans were mad about it. I figured WWE would find a way to get him in the match, so it’s good to see that he’ll likely end up in there.

Roman Reigns winning the men’s Elimination Chamber is very likely. The plan has been in place since last March to have Reigns face Brock Lesnar at WrestleMania for the Universal Championship and Reigns will be the big favorite in this match. Braun Strowman is rumored to face The Miz for the Intercontinental Title at WrestleMania, so they will likely start their angle during the Chamber match.

As for John Cena, he’s probably facing The Undertaker at WrestleMania, so most likely that story will be started on the Feb. 26 Raw. I’m not sure where that leaves Finn Balor or Elias at WrestleMania because WWE might toss a lot of guys in a multi-man match like they tend to do at WrestleMania. The six women in the Elimination Chamber match are: Women’s Champion Alexa Bliss, Bayley, Sasha Banks, Sonya Deville, Mandy Rose and Mickie James. It’s a match for the Raw Women’s Championship, so the winner will likely go into WrestleMania as the champion.

On Monday’s Raw, Bliss whined to Raw general manager Kurt Angle about how she has to defend her title in a Chamber match while Brock Lesnar, the Universal Champion, does not. Angle pointed out that Lesnar successfully defended his title at the Royal Rumble last month while Bliss hasn’t defended her title (on a PPV) since TLC, which was all the way back in October. It was a valid point by Angle that also reminded us of how weak this Bliss title reign has been. I’ve been really bored by it, but WWE does love putting titles on her as we’ve seen in the last two years.

I was going to go with Nia Jax to win, but she’s not in it because she’s facing Asuka. I guess they’ll have Bliss retain, although I’m very bored by her title reign which hasn’t had a lot of title matches of late. Of course, I’d rather have Mickie win, but that’s probably not going to happen.

Banks is likely going to get pinned by Bayley and Banks is going to turn heel the next night on Raw. You could even have Banks attack Bayley after Banks is eliminated here too. The other match on the show is Asuka vs. Nia Jax. If Jax wins, she will be added to a title match at WrestleMania. Asuka gets to choose which champion she’ll face at WrestleMania. I don’t expect Asuka to lose here.

That’s all for now. I’ll have more predictions and may even change my picks as we get closer to the date of Elimination Chamber on Feb. 25.