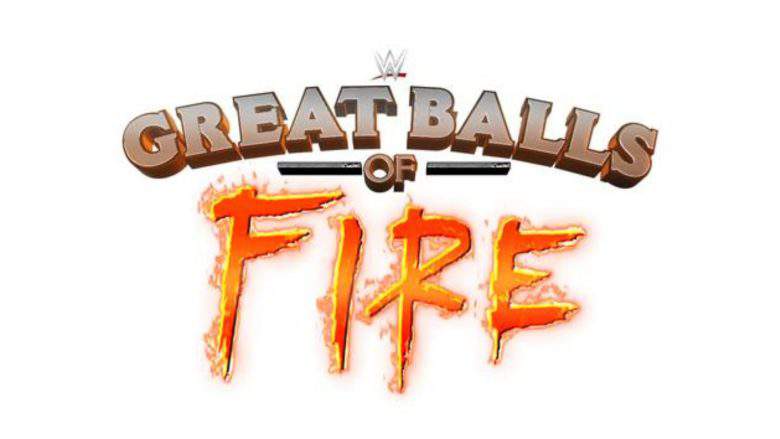 For July’s Raw pay-per-view (technically not a pay-per-view anymore), someone in the company actually suggested naming their event “Great Balls of Fire.” And one or more of the McMahon family members for some reason signed off on that idea. The name sounds like a placeholder until someone thought of something better and the logo looks like something that someone spent about 20 seconds on.

Sure, it’s at least more creative than events named after a match like “Fatal 4-Way,” but it’s still incredibly stupid. Not to mention the easy double entendres that will occur particular for the PG era WWE.

In addition, WWE and Vince McMahon has been very cognizant on making sure their events don’t sound old and dated. That’s why WrestleMania is no longer known as the “Grandaddy of Them All” and this year’s event was very rarely mentioned as WrestleMania 33 by WWE. And now WWE has named their latest pay-per-view after a famous Jerry Lee Lewis rockabilly song that was released 60 years ago. I don’t quite get it.

It seemed like the public didn’t get it either and spent little time making fun of the name.

WWE is so aggressive about marketing a PPV name on RAW. It's going to be hilarious hearing "and at Great Balls of Fire" for an entire month.

You could have much better names for your PPVs but you choose GREAT BALLS OF FIRE?

McMahon has lost his mind now.

I also just realized that @HeymanHustle is gonna have to cut promos for “Great Balls of Fire.” I am sooooo here for that

@WWE WTF is a Great Balls of Fire, who is writing this shit? I'm jobless and I can send ya'll storylines, etc. that I wrote. HMU

I hope at Great Balls of Fire, they hang a giant pair of truck nuts while it's set ablaze as arena decor.

Great Balls of Fire is the worst name for a PPV since…since…Bragging Rights.

Great Balls of Fire could have the best match card ever with a 30 minute AJ Styles vs. Shawn Michaels match and I still wouldn't watch it

Come to think about it…if Vince McMahon was the one to name the new PPV, it would have been WWE Giant Grapefruits.
Not Great Balls Of Fire

Can't wait to hear "And if you sign up for the WWE Network now you get all types of exclusive content including Great Balls of Fire free!" pic.twitter.com/343rBWDlZ8

Great Balls of Fire ppv will just involve superstars with STDs. So a lot of Dolph Ziggler matches

*Looks at trends, wonders why Great Balls of Fire is trending. Clicks on trend, INSTANTLY LOL'D*

Are you sure Vince…its kinda lam–

@johnreport Great…I'm sure Vince thinks Roman saying Great Balls of Fire over and over will finally help get him over… pic.twitter.com/2xEZUYMcYy

And last, but not least, SmackDown’s Becky Lynch tweeted this:

If you’re a WWE fan, this is one of those times where you just have to throw your hands in the air and go for the ride. Like someone said, Paul Heyman and his legendary promos may be the only one who can save the name “Great Balls of Fire.”