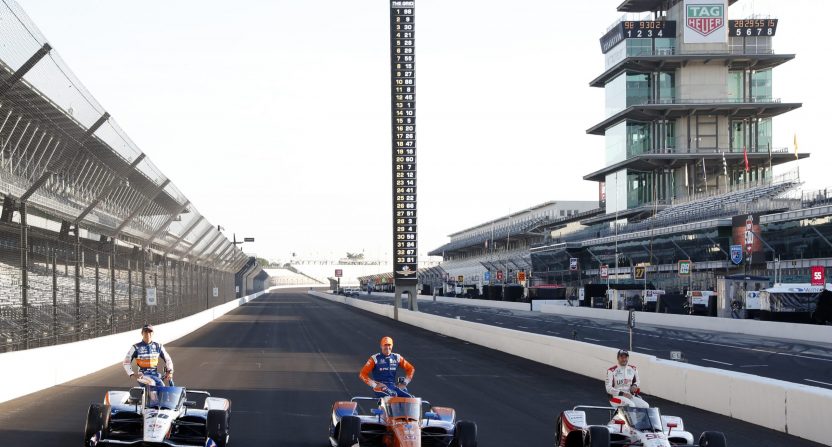 This Sunday’s Indianapolis 500 will be the most different ‘500 in its 109 year history. Sure, races have been canceled due to World Wars I and II, but the previous 103 races have been run in May. This year, due to the COVID-19 pandemic, the “Greatest Spectacle in Racing” is being raced in August and without fans.

Nevertheless, things might look different, but some things remain the same. There will still be 33 cars racing at 225 mph for 500 miles, and people will bet on who wins this great race.

With a somewhat limited practice schedule, to go with the fact no one has raced an Indy Car at the Indianapolis Motor Speedway in August, this year’s race can be unpredictable. Even so, there are still some people to look toward if you feel like putting a few bucks on the race.

All four drivers are certainly capable, and the sentimental pick should go with the guy with the famous last name trying to break a 50+ year curse. But if you’re betting money, you have to go with your mind and not your heart.

That’s why I’m going with the hot hand and picking Dixon from this group. He has three wins in six races and has a 49-point lead. Dixon dominated at Texas, the only oval that has had similar top speeds as Indianapolis so far. And he has been in the top-three in every Indy practice session he participated in. Along with a front row starting position, this is probably Dixon’s best chance to win his second Indy 500.

All seven of these drivers have a realistic shot to win and have double-digit odds. The one who jumps out to me the most is Takuma Sato (16/1). Sato starts third, and he best employs the Ricky Bobby method: “If you ain’t first, you’re last.” That was proven when he crashed going for the win on the final lap in 2012, and with his triumph in 2017. Sato will give it another shot, and if he can reach the end, he’ll be up toward the front.

Obviously, one cannot ignore the Penske contingent of Josef Newgarden (11/1), Will Power (12/1), and Simon Pagenaud (14/1). Roger Penske owns the Indianapolis Motor Speedway, both physically and metaphorically. His 18 wins as a car owner is most by far, and his team has won the past two ‘500s. So if you’re not looking to bet on a favorite, but still want to have someone who can realistically drink the milk, these drivers should be considered.

I know it’s tempting to bet on Fernando Alonso (25/1) because he’s the two-time Formula 1 World Champion and is trying to complete the Triple Crown, but he’s a suckers bet. So many people will be betting on him just because of who he is; you won’t get good odds on him in the first place. And Alonso has struggled throughout the month of August.

Among the other underdogs, two drivers who really stick out to me are Conor Daly (25/1) and Marcus Ericsson (45/1). Daly has been strong all month and seems to have race pace. Ericsson has the opportunity. He’s in a Chip Ganassi car, and is starting just outside the top 10. Ericsson won’t be on anyone’s list as drivers who could win, but if you’re looking for a surprise winner, Ericsson fits that bill.

You’re welcome to bet on these drivers because they’re in the field and have as much of a chance as any of the other 32 drivers. But while stranger things have happened at the Indy 500, these drivers probably won’t win this year.

If you absolutely have to bet on someone from the bottom 13, Santino Ferrucci (50/1) is probably your best shot. He’s fast, he takes risks, and he’ll do his hardest to get to the front, but he may not have the car to get it done this year.

I’m in no way recommending these bets but if you’re looking to bet on a sentimental favorite, two come to mind. Tony Kanaan (50/1) is in his final IndyCar season, but may come back to race Indy. JR Hildebrand (250/1) lost the Indy 500 in one of the most heartbreaking ways to lose a race, crashing in the final turn of the final lap in 2011. If anyone deserves to pull off a monumental upset to win the Indy 500, it’s JR Hildebrand.

[All odds based on the Draft Kings Sportsbook as of Aug. 19]