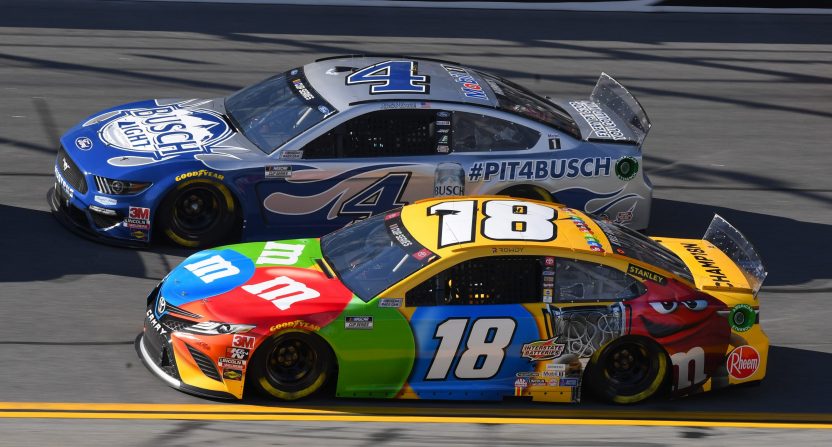 The 2020 NASCAR Cup Series season is going to be a pivotal one for the sport. NASCAR has a few new sponsors for its top series, some great rookies are arriving, and a legend is retiring this season. And with a new car and potentially new tracks on the horizon, this may be the start of a transition into the next era of the sport.

We take a look at five of the more intriguing storylines that are set to be the talk of the 2020 NASCAR Cup Series season.

It seems like yesterday that Jimmie Johnson entered NASCAR. And while the start of his career had some growing pains, Johnson and his longtime crew chief Chad Knaus proved to be one of the greatest driver/crew chief pairings, reeling off title after title.

This season will be Johnson’s last as a full-time Cup driver, but the 44-year-old hasn’t slowed down. In fact, Johnson ran a half-marathon before racing in Sunday’s Busch Clash. But after 19 full-time seasons, 83 wins, and seven championships, Johnson just wants to go out and try new things while he can still do them. Who knows, maybe we’ll see him race in Indy Car or at a race like Le Mans.

How will Johnson do this season? The team isn’t suddenly going to find lightning in a bottle so don’t expect him to win an eighth championship, but an 84th career win is possible.

Most NASCAR seasons involve a round of musical chairs and this offseason was no different. In total, 10 full-time Cup teams have new drivers. Six of those new faces will be rookies. Christopher Bell (95), Cole Custer (41), Quin Houff (00), John Hunter Nemechek (38), Brennan Poole (15), and Tyler Reddick (8) will be competing for top rookie honors.

Regarding the other four changes, Chris Buescher (17) and Ricky Stenhouse Jr. (47) swapped teams, while Matt DiBenedetto (21) now drives for the legendary Wood Brothers, and Daniel Suárez (96) takes over at Gaunt Brothers Racing. The change of scenery has already paid dividends for one driver. Stenhouse qualified on the pole for this year’s Daytona 500 for JTG Daugherty Racing.

You can also argue that while the three Team Penske drivers of Ryan Blaney, Brad Keselowski, and Joey Logano haven’t changed cars and car numbers, their crews have swapped to another Penske driver. Keeping track of how everyone does in their new settings will be fun throughout the year.

Last season, NASCAR changed up their race cars in order to make the racing more competitive. A tapered spacer limited horsepower and an eight-inch spoiler on the back were the most noticeable changes. At the mile-and-a-half “cookie cutter” tracks, the rules package did its job. On short tracks and at places like Dover, Pocono, and Phoenix, it was rough to watch as it made passing on those tracks very tough.

This year, NASCAR has tweaked the rules package for short tracks, road courses, and mile-long places like Dover, New Hampshire, and Phoenix, where the spoiler got knocked down to 2.75 inches and various changes to the front of the car in order to reduce downforce.

While it hasn’t happened at every track that needed the change, it’s a change that should be the best of both worlds. NASCAR couldn’t really make wholesale changes.

This test has been a blast so far. It’s fun talking about different types of adjustments. The car stops on a dime. Lots to look forward to in the future. #NextGen #NASCAR

The End of the Gen 6 car

Developed in 2013, the Gen 6 car was a visual improvement over the much-maligned “Car of Tomorrow.” But after eight seasons, that car will be going away.

The Next Gen car is still in the development stages but it’s currently being tested by various drivers. Along with a visual difference, the new car is supposed to have an 18-inch tire and have more spec parts in order to save teams money. It’s also designed to leave open the option for a hybrid engine in the future.

How does that affect 2020? Well for one thing, drivers are likely to be more aggressive. After this season, these cars will be obsolete anyway, and if this past weekend’s Busch Clash is any indication, there will be some aggressive driving this season.

The race for the championship

Like every season, the race for the NASCAR Cup Series championship will take center stage. But how we get there will be different. The schedule has changed to have Daytona be the regular season finale while Bristol, the Charlotte Roval, and Martinsville close out each round. And instead of Homestead, the Championship Four will race at Phoenix for the championship.

Expect the usual candidates to compete for the title this season. Kyle Busch, Martin Truex Jr., and Kevin Harvick have been competing for the championship in each of the past three years, and I wouldn’t be surprised to see all three back to try it again.

As for who wins the championship? I’m going Kevin Harvick. While it’s been a couple years since he won there, Harvick used to own Phoenix, winning nine Cup races with a four-peat from 2013-15. Add in the fact that Harvick is cutting back on broadcasting to be with his family and focus on racing (and announced a contract extension to drive through 2023), and this looks like a brand new Kevin Harvick.