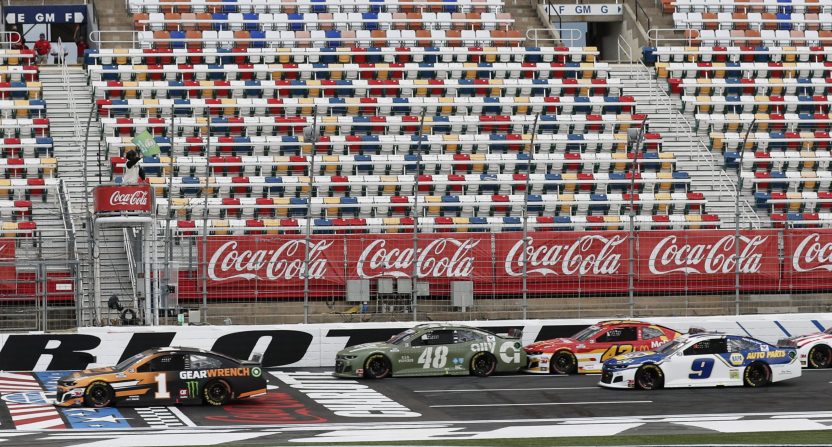 While some may not believe this, NASCAR does listen to drivers and fans. Sometimes, an argument could be made that the sport sometimes listens to outside input a bit too much but this is one of the better ideas NASCAR has had. Due to driver input, NASCAR is experimenting with something that is typically only seen on the local short tracks around the country.

According to Jordan Bianchi of The Athletic, NASCAR is planning to have a choose cone rule for the All-Star Race at Bristol in a couple weeks. Because it’s a non-points race, the All-Star Race is the opportunity for NASCAR to try new ideas to see if they can be implemented in points races. While things like different tire compounds failed to take off, NASCAR did originally test out the current aero package at the All-Star Race a couple years ago.

The choose cone rule is going to be a different method to restart a NASCAR race. In NASCAR, the leader only has a choice which lane to start in, and everyone else lines up with odd position drivers on the inside and even position drivers on the outside. The choose cone is different in that it gives every driver the choice on which lane to restart in.

Pretty much, when cars line up to restart, there is a cone sitting in the middle of the track. When the line of cars get to the cone, they pass the cone either from the left or right. How they pass the cone is where they line up for the restart.

Because they’re trying this rule at Bristol, let’s use that circuit as the example. Bristol’s racing line on the frontstretch is by the wall, and because there’s more grip by the wall, the outside line is going to have an advantage for the restart. The leader gets to choose the outside but if you’re behind the leader and you want to be in the best position on the restart, the next best position to be in is fourth place because second and third are on the inside line and won’t have the grip to make a good restart.

With a choose cone, not only would the driver in first choose the outside but most likely the drivers in second and third would go on the outside too. This is where things get interesting. If you’re someone in fourth or fifth and you haven’t seen anyone go to the inside, being the first car on the inside might be worth the gamble. Yes, it’s the worse line and you’re likely losing a couple spots just because you probably won’t have a good restart but if you can find yourself in a better spot than you were in, it was worth the risk.

It’s like when someone deep in the field pits for two tires when everyone else takes four. Two tires can get a driver in the lead and chances are that driver won’t be in the lead for long, but if they were in 20th place and took two tires to get up front, as long as they stay above 20th by the next pit stop, it was a net positive.

As someone who loves a race that has a variety of strategies, the choose cone is perfect for that very reason. Every driver on every restart has to think to themselves what’s the best line to be in and measuring that risk versus reward. In addition, it takes away the motivation for any possible congestion and gamesmanship of drivers intentionally slowing down at the end of pit road which let’s face it, looks a bit amateur hour at times.

Fan reaction has been mixed. Many love the idea and many do not. This isn’t the case in every situation but it seems to be split based on whether or not one has seen the choose cone at a local short track. If one hasn’t, they might be more likely to see this as a “gimmick” to switch up the field on the restart, which kind of misses the point. Either way, the All-Star Race will give fans a chance to see this and maybe seeing it in practice will get some of the naysayers to better understand and possibly support a potential permanent rule change in the future.