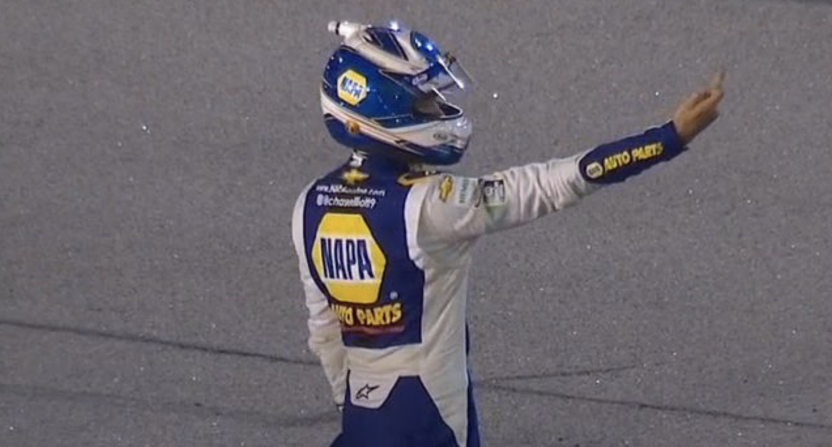 After years of lower ratings and lower interest, NASCAR has seemingly turned the tide in 2020. A rain-delayed Daytona 500 had strong ratings considering the delay and NASCAR’s adjustment to eSports during the COVID-19 pandemic has kept over a million people tuned into iRacing and fared way better in comparison than any other sport.

In its return to real-life racing this past Sunday, NASCAR viewership was up 38 percent compared to the final race before the pandemic. And with 6.32 million viewers, it was the most-watched non-Daytona race on Fox since 2017.

NASCAR is on an upswing and what happened Wednesday night could set the stage to further NASCAR’s resurgence for years to come.

With 28 laps to go, Kyle Busch turned sharp right and turned Chase Elliott into the wall. Busch saw an opening that wasn’t there, he misjudged it, and he said as much in his postrace interview and subsequent apology but Elliott was understandably upset and displayed his displeasure with one of the most dramatic displays of the middle finger shown in pro sports.

Kyle Busch and Chase Elliott are two of the most popular drivers in NASCAR and there isn’t that much overlap between the two fanbases. Elliott doesn’t garner as much love/hate as Busch but Kyle Busch fans love their driver and will defend him as much as Chase Elliott fans will do the same.

It’s too early to say Kyle Busch and Chase Elliott have a “rivalry” but Wednesday night has sparked the potential for one and that’s something NASCAR has been missing for over 20 years.

Ask yourself, when was the last truly great rivalry in NASCAR? There have been scuffles in recent years but nothing lasted longer than a month or two. I’m talking a rivalry between two popular drivers at the top of their game that lasts for years where one fanbase couldn’t stand the other driver and vice versa. The last time that happened was Dale Earnhardt vs. Jeff Gordon in the 90s.

The Earnhardt/Gordon rivalry was a big ingredient of why people still look fondly of 90s NASCAR racing and how today’s racing ain’t what it used to be. NASCAR was at its peak in the 90s and while there were consequences to that expansion, the stands were full, sponsors were splashing the cash, the drivers were making more money, and the sport was solidly within the mainstream consciousness.

I grew up a NASCAR fan in the middle of the Dale Earnhardt/Jeff Gordon rivalry. I took no sides at the time as I was a Bill Elliott and Dale Jarrett fan but I saw from the outside just how much that rivalry fueled the sport as a whole. Earnhardt fans hated Gordon and Gordon fans hated Earnhardt and those were two of the most popular drivers of the sport at the time. And while a personal respect was gained between the two of them as time went on, their on-track competitiveness never waned and their fans kept hating the other driver.

Kyle Busch vs. Chase Elliott isn’t exactly Dale Earnhardt vs. Jeff Gordon but it’s the best rivalry that NASCAR can have right now and would work as a way to get people to tune in, fill the stands (when it’s safe to do so), and really add some fuel to this upswing NASCAR is seeing right now.

Kyle Busch has tapped into the NASCAR fanbase in such a way that he understands it’s okay to be hated by a portion of the crowd as long as his fans appreciate what he does. In that scenario, Kyle Busch could be compared to Dale Earnhardt. Earnhardt was someone who fans either loved or hated and Busch is a rare person willing to embrace that in a world where people want to be liked by everybody. Dale Earnhardt believed that it didn’t matter as long as fans booed or cheered him as long as they noticed him and Kyle Busch took that to heart more than any other driver right now. Busch might be the most hated driver, but he’s also one of the most popular as a result.

Chase Elliott is the son of a legend, he replaced another legend, he’s from the Southeast, and he wins. If NASCAR built a driver that the average NASCAR fan could love, it would be Chase Elliott. Elliott isn’t the kind of guy to ruffle feathers and steers clear of controversy whenever possible, but when someone wrongs him on the track, he stands up for himself and takes control. He doesn’t do anything himself that causes fans to “hate him,” and Elliott definitely wasn’t the bad guy at Darlington, but he’s popular enough right now that a rivalry between him and another top driver like Kyle Busch would be awesome to see.

Imagine a multi-year rivalry with those two drivers. That doesn’t mean the other 38 drivers are ignored. There are plenty of fans who aren’t fans of Kyle Busch and Chase Elliott but look at this like pro wrestling. Busch vs. Elliott can be the main event that galvanizes the current fanbase and brings in new fans. From there, fans can grow to love the undercard and everyone else in the sport benefits. Busch vs. Elliott can easily become Joe Gibbs Racing vs. Hendrick Motorsports, which can easily become Toyota vs. Chevrolet. Rivalries begets rivalries and all NASCAR needs is one big one that can kickstart a real and compelling storyline that fans will be dying to not only tune in each week but spend the middle of the week discussing and debating what happened.

If NASCAR plays their cards right, NASCAR fans 20 years later can look fondly on the 2020s and say that the sport ain’t what it used to be back when Kyle Busch and Chase Elliott were rivals.