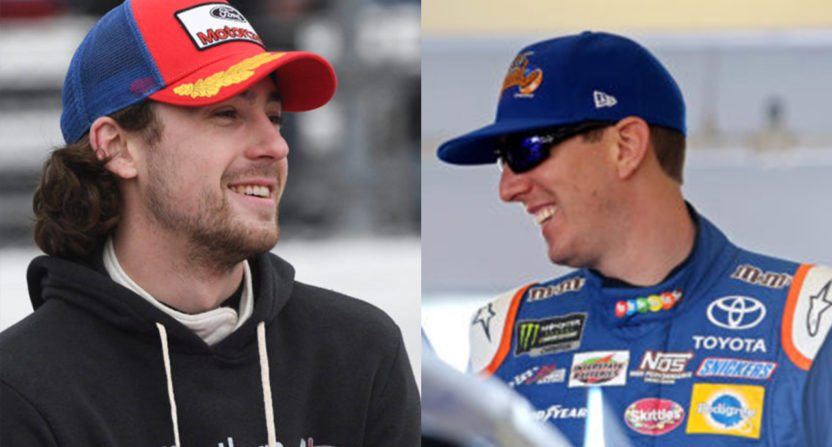 NASCAR is certainly at a crossroads. Dale Earnhardt Jr. retired and his fans are now looking for a new driver to root for. Seeing this, many drivers have been selling themselves just a little bit more this year to hopefully be that new driver for that potential new fan.

What has happened has been a war of words between some of the veteran drivers of NASCAR and the younger drivers who just entered the sport. And if NASCAR plays their cards right, we may have the makings of a multi-driver rivalry that could dominate the sport in the short term.

The discussion started when Kyle Busch started talking about how NASCAR has been promoting younger drivers more than they used to. With drivers like Ryan Blaney, Alex Bowman, William Byron, Chase Elliott, Erik Jones and Darrell Wallace Jr., among others coming into the sport at a rapid pace, along with NASCAR and Monster Energy wanting to connect more to millennials, it’s kind of stuck in Busch’s crawl.

“All you’re doing is advertising all these younger guys for fans to figure out and pick up on and choose as their favorite driver,” Busch said during the NASCAR preseason media days at the Charlotte Convention Center. “I think it’s stupid. I don’t know, I’m not the marketing genius that’s behind this deal.

Kyle’s brother Kurt tried to elaborate on Kyle’s point. And while he admitted he didn’t agree with everything his brother said, he went as far as to say that Chase Elliott was “slightly overrated.”

From Kurt Busch’s interview from The Domenick Nati Show as transcribed by FTW:

“I agree with certain aspects of what he’s challenged, and then I disagree with other parts of it. But what I think he’s trying to say is we’re promoting these guys, and they don’t have the race wins yet. There’s zero in the win column for a guy like Chase Elliott. There’s zero for Bubba Wallace, Erik Jones — all those guys. (Kyle) Larson’s out there. He’s young, he’s winning and they need to push him. I see him as a future champion. But what I think Kyle’s saying is these guys are being given a free pass — so to speak — become a superstar, and we haven’t seen their success on track translate to what’s being shown to the world.”

“That’s a touchy subject, and I think that’s what my little brother, Kyle, is referring to. And it’s cute. There’s different chosen ones or guys that take over iconic rides. But right now, Bill Elliott’s son — who is going to be a big-time player in our sport and has yet to win — is Chase Elliott. But he’s doing a good job, it’s all starting to blend in, and I’d say he’s just slightly overrated right now without the race wins that he should have in the win column.”

NASCAR responded that they see Kyle’s point and agree with parts of that. It’s no secret that NASCAR has focused more on younger drivers now and no one can really blame them. With Jeff Gordon, Carl Edwards, Tony Stewart and Dale Earnhardt Jr. retiring and Matt Kenseth likely out as well in just a few years, NASCAR needs stars and fast. And it’s a way smarter marketing strategy to promote a driver who is more likely to be in the sport another couple decades than one who may not be racing in a decade.

Unfortunately for Kyle Busch, he entered NASCAR at a time where drivers like Gordon, Stewart and Dale Jr. were on the track so NASCAR didn’t need to focus on younger drivers, despite Gillette having a program called the “Gillette Young Guns” which marketed younger NASCAR drivers that included Kyle Busch.

When the younger drivers like Blaney and Wallace were asked about Kyle’s comments, the two drivers took them on in various ways. Blaney laid it out on the line that he gets more publicity than Busch because he does more media commitments and puts himself out in public more often due to social media and hosting a podcast.

“I feel like if some drivers were more willing to do these things, they’d get asked more to do it,” Blaney said when asked about Busch’s comments. “And the reason why I get asked to do it a lot is because I say yes a lot, because I think it’s good for the sport and myself. I can tell you personally, [Busch] doesn’t like doing a lot of stuff, so they don’t ask him. … That kind of made me upset, how he bashed that part of it. But, to each his own. If he doesn’t want to do anything, so be it.”

While what Blaney said about Busch not doing as many media commitments is fair, Blaney could stand to reason that Busch is in a different part of his life than Blaney is right now. College aged single people have a lot more free time than a married person with children. This isn’t to give Busch a free pass but in general, when an older driver turns down an interview or a photo op, they may want to use that time to be with their family and I can’t blame them for that.

Wallace, on the other hand, posted a video of Blaney coming over for a sleepover saying they needed to make plans about the youth movement to poke fun about it.

What this week has showed is that NASCAR needs to market this as a rookie vs. veteran rivalry that can not only get new fans and get page clicks, but also mirror what’s going on in society.

Look all around and there’s a millennials vs. baby boomers dynamic that one sees everywhere. Baby boomers see millennials as spoiled and entitled who want everything right now and aren’t willing to work for it. Millennials see baby boomers as the generation who torpedoed everything that was great so now that they’re out into the work force, have to work much harder for less money while everything else (especially college tuition) is more expensive.

And that’ll keep going on and on and will happen to this current young generation. Blaney, Byron and Elliott probably won’t like it when they get older and see the younger generation enter the sport and have the belief they are being pushed out of the sport. That’s nothing new. But NASCAR can use this to their advantage and play up a rivalry of the young guns wanting a chance to prove themselves against the experienced veterans who are trying to keep their spot on the top of the mountain.

The issue is that at some point, those veterans will be retiring pretty soon and NASCAR would be back at square one. But given lower ratings, less attendance and a fanbase that is trending older and older, maybe this is the key for NASCAR to put a band-aid on things and have time to develop a long-term strategy to regularly increase ratings and attendance. NASCAR is great at giving people drivers to root for, maybe the next step is to provide antagonists. Give people someone to cheer as well as someone to boo and by making a rookie vs. veteran rivalry, that may bring in interest among the millennial demographic and keep them on until they become the older generation and criticize those younger than them.