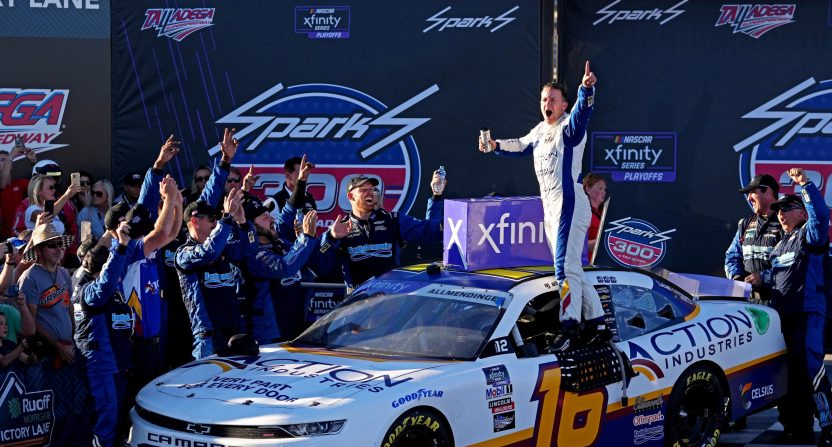 Former NASCAR driver AJ Allmendinger has decided to return to the Cup Series full-time starting next year, according to The Athletic.

Allmendinger, who is 40, will be driving for Kaulig Racing and will be behind the wheel of the No. 16 Chevrolet. The veteran raced in the Cup Series from 2007 to 2018 but left the sport because of his lack of success.

Allmendinger was planning on working on cars and doing some broadcasting but that all changed in 2019 when Kaulig Racing asked him to race their Xfinity car and he finally found some success on that racing circuit. From that point on, he increased his driving schedule, which paid off for him.

Over the weekend at Talladega, Allmendinger earned his first win at that racetrack in a photo finish.

#FastFact: @AJDinger has become the FIRST Kaulig Racing driver to win on every type of track in the @NASCAR_Xfinity Series! 😲

“Gosh, we’ve been so close to winning one (superspeedway race) and I feel like I keep giving them away,” he said afterward. “Thought I might have given it away. I’m still learning, trying to know what too big of a lead is. But honestly, all credit to (Kaulig teammate) Landon Cassill. He kept shoving me. He stuck with me. That’s what is great about Kaulig Racing. When you have teammates like Landon and Daniel (Hemric) that you know wherever you go, they’ll go with you. So thank you, Landon.”

Allmendinger has 14 career Xfinity Series victories to his record.