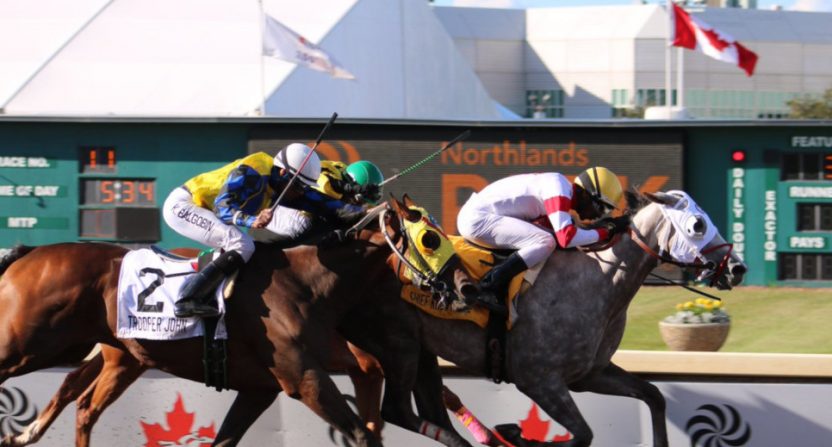 On-the-field sports outcomes are often subject not to just the initial ruling by officials, but also to video review, to appeal to a league or governing body, to appeal to a sanctioning body, and sometimes even to legal action. It’s extremely rare for a decision from an actual court (not an sport-specific appeals body like the Court of Arbitration for Sport) to actually change the results of a sporting event, though, and while there have been a couple of attempts at that recently (see the lawsuits from Saints’ fans over the 2019 NFC Championship Game and the lawsuit from the owners of Maximum Security over a 2019 Kentucky Derby disqualification), few have given them much of a chance at success.

But in the Canadian province of Alberta, a judge just intervened to alter the results of the 2017 Canadian Derby horse race. And while that’s a radically different jurisdiction than the U.S. sports lawsuits and comes with significantly different legal rules, it’s a result that still might provide a little hope for those trying to change on-field outcomes through the courts. Here’s that decision, from Justice J.M. Ross, via Jonny Wakefield of The Edmonton Journal:

In case you've ever wanted to read a court decision about horse racing https://t.co/OTDyKzKbFI

The short summary of that lengthy decision is that the Chief Know-It-All owners’ complaints on composition/quorum (one of the two members of the tribunal was replaced by the provincial finance minister after hearing the arguments but before the decision was filed, but was granted specific ministerial authority to continue to participate in decisions based on cases she’d heard) were denied, as were their arguments that the tribunal exceeded their mandate and shouldn’t have overturned the stewards’ decision of no disqualification. However, Justice Ross then goes on to say the tribunal acted improperly by moving both Double Bear and Trooper John to first when Trooper John wasn’t fouled, that they should have only put Chief Know-It-All behind the horse he fouled, and that they cited their actions as a rules decision rather than a discretionary decision. So this all ended with him declaring Double Bear to have finished first, Chief Know-It-All to be second, and Trooper John to be third.

While the specifics of a two-year-old horse race in Alberta aren’t necessarily extremely relevant to many U.S. sports fans, the outcome here is certainly interesting. How many sports events are decided by a judge two years after the fact? And there are also questions here of what happens to those who bet on this race, especially considering that Northlands is now closed (it shut down in January after 113 years of operation) and that wagers on events there were offered at the track, at other locations in Edmonton, and at even U.S. and international betting sites. (An August 2017 Edmonton Journal piece about the first appeal said the appeal “does not affect parimutuel wagering,” but it’s unclear if the judicial ruling still won’t affect bets.) And the outcome of this race is now completely different depending on if you looked at it when it happened, when the tribunal issued their ruling last July, or when the judge issued his ruling this week.

In some ways, that speaks to the difficulty of more complicated and longer-running review processes, especially when they involve a follow-up game (such as the Saints’ lawsuit). There would seem to be a high hurdle to a judge invalidating the results of not just the NFC Championship Game, but also the Super Bowl, as that would create a whole lot of chaos (perhaps especially around those who bet on those events and already collected winnings). And similarly, a judge overruling the disqualification of Maximum Security feels like a long shot at this point; that took place so long ago at this point, and you can bet that books won’t want anything meaning they might have to pay out those who bet on Maximum Security as well. There’s a reason why coverage of the Maximum Security lawsuit came with lines like “No horse owner has ever successfully appealed the outcome of a horse race in a Kentucky court” and ” judges tend to defer to stewards and racing commissions because they are the experts on horse racing.”

There’s plenty of opportunity for review and appeal of sports events, but any sort of overturn on appeal carries backlash, and that backlash grows (and the overturns get fewer) as you move away from the date of the event. Even video review-reversed calls within a few minutes come with a lot of criticism, and league-ruled appeals after the fact are highly controversial and highly unusual, even when they take place in a shorter span than years (like the days to a decision and month of eventual maneuvering around the Pine Tar Game). A judicial overturn much later would seem to come with more problems and more criticism, especially if it came around a high-profile event. So don’t necessarily expect other judges to decide to overturn sports results. But Justice Ross’ decision to do just that here illustrates that legal battles can sometimes reverse on-field results, even if that’s still likely to remain uncommon.