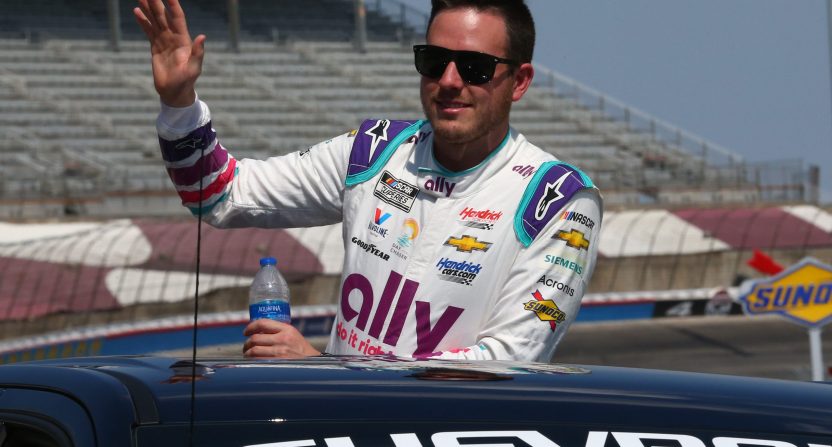 As the NFL world reacts to Miami Dolphins quarterback Tua Tagovailoa suffering a severe head injury on Thursday night just four days after he returned to a game following an apparent concussion on Sunday afternoon, NASCAR has its own issue with a driver continuing to compete despite head trauma.

During last weekend’s Cup Series race at Texas Motor Speedway, driver Alex Bowman was involved in a brutal wreck that will keep him out of this week’s race at the Talladega Motor Speedway due to concussion symptoms. However, Bowman was still allowed to finish the race despite the big collision and his radio comments mentioning how hard the hit was and saying that he won’t be able to finish the race.

In a highlight video shared by Fox, an in-car camera shows the moment Bowman the wall along with a radio transmission where he tells his team he won’t be able to finish the race.

"Not going to take his (expletive). That's all it is." Radioactive: Texas. #RaceHub pic.twitter.com/6mVb6z9az8

“Done,” Bowman said in the video. “I can’t drive the rest of the day. I don’t understand how this thing’s still rolling. That’s the hardest I’ve ever crashed anything in my entire life.”

Still, Bowman finished the race in Texas before it was determined that he had concussion symptoms. And the racing world absolutely blasted NASCAR for allowing that to happen.

So @Alex_Bowman literally says he can’t drive the car anymore and it goes ignored. I put some of this on @TeamHendrick too. https://t.co/UpWOuXW5yP

It's remarkable to see how much Bowman's head shudders. Like a cartoon character, the energy of the strike goes through his entire body. Hope he recovers.

Shouts to @KevinHarvick and @dennyhamlin for applying the pressure. Keep it up. https://t.co/tWNM5mvFoq

“I can’t drive the rest of the day. I don’t understand how this thing is still rolling. It’s the hardest that I’ve crashed anything in my entire life.”

FWIW: Bowman did continue driving with the concussion. He finished -5 laps down in 29th. https://t.co/3WamSrEwQE

Bowman’s crash is 1:23 in this.
It didn’t look like much, but listen to Bowman.
Guys, I really hope nothing bad happens at Talladega to a driver.
Dega is a track where the crashes can be hard…#NASCARhttps://t.co/f8coq3Nxbe

Woof. Bowman in this video: "Done. I can't drive the rest of the day. I don't understand how this thing's still rolling. That's the hardest I've crashed anything in my entire life." https://t.co/8vjUbEzxcy

Around the 1:23 mark is the Alex Bowman radio transmission after the wreck where he mentions how hard the hit was. … He finished the race at Texas. He will miss the Talladega race after suffering concussion-type symptoms. https://t.co/C9JprlPgKS

If the NFL and the Miami Dolphins are going to face criticism for their handling of Tua Tagovailoa’s head trauma, NASCAR will get its fair share of criticism for this, too.