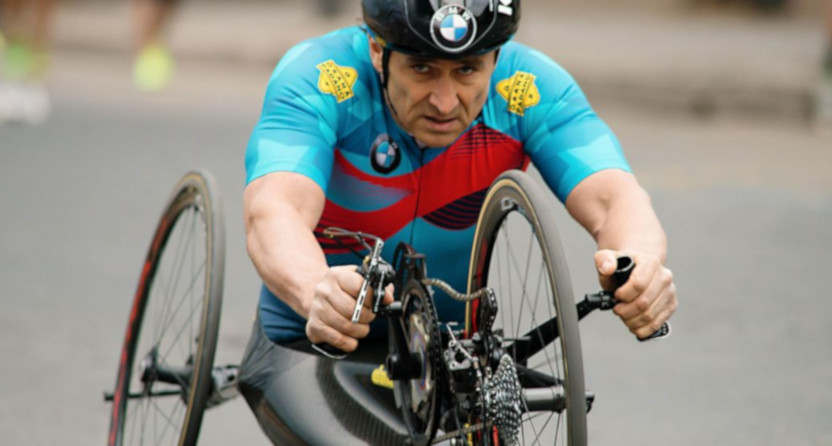 Famed racing driver turned Paralympic champion Alex Zanardi was seriously injured during a handbike race Friday. During one stage of the “Obiettivo tricolore” handbike relay race for Paralympic athletes, the 53-year-old Zanardi was involved in a bad crash and airlifted to hospital. Here’s more from The Associated Press:

Zanardi was transported by helicopter to the Santa Maria alle Scotte hospital in Siena following an accident near the Tuscan town of Pienza during a national race for Paralympic athletes on handbikes, police told The Associated Press.

A Carabinieri police official in Montepulciano said the accident involved a “heavy vehicle” and he believed Zanardi was still alive. The official did not give his name as per local custom.

The accident occurred when Zanardi was descending a hill, lost control and veered into oncoming traffic where he was hit by a truck, the Gazzetta dello Sport reported.

Many prominent racing figures, including Mario Andretti, have already expressed their support for Zanardi:

I am so anxious and frightened about Alex Zanardi that I'm holding my breath. I am his fan. I am his friend. Please do what I'm doing and pray pray for for this wonderful man. https://t.co/P8XPVymmKg

Zanardi was first known for his driving career in F1 and CART races, which included winning CART championships in 1997 and 1998. He lost his legs in a crash in a CART race in 2001, but managed to return to racing full-time in 2004 in the FIA European Touring Car Championship. He then took up handcycling, placing fourth in the New York City marathon in 2007, winning that event in 2011, and winning two golds and a silver at the 2012 Paralympics and then another two golds and a silver in the 2016 Paralympics. He’s had a lot of inspiring quotes over the years, including this one relayed by Emily Mawson in a March 2020 piece at juliusbaer.com:

“When I lost my legs, that didn’t present itself like a great occasion to make my life better,” he says, his eyes smiling. “But in fact it did, because all the things I’m doing these days are directly related to my new condition. So I think I can call what happened probably the greatest opportunity of my life.”

Zanardi has found ways to continue driving racecars as well. He competed in his first race without prosthetics at the Rolex 24 at Daytona endurance race in January 2019, driving a special BMW car operated by hand levers. Here’s what Ken Willis of the Daytona Beach News-Journal wrote about that effort:

For the average sports-car flogger here this week, a lap at speed is a handful, even with their two feet controlling three of the components — gas, brakes, clutch. Zanardi maneuvers the toughest parts of the race course with just his left hand on the wheel while his right hand is feathering, finessing or outright jamming the brake lever.

“It’s incredible,” said Phillip Eng, who co-drives BMW’s other entry, the No. 25 sister car to Zanardi’s No. 24. “Under normal circumstances, when the balance is good and tires are new, it’s still difficult. But when the degradation kicks in and the tire gets older … and then he actually needs to counter-steer into the corner, I think it’s extremely, extremely difficult.

“I cannot point out enough how much respect he deserves; I don’t know if I would be able to do it.”

Again, Zanardi insists, it’s not a huge deal, but a matter of utilizing what you have.

“Perfect would be to go back to the way I was driving prior to Sept. 15, 2001,” he said, referencing the wreck that changed his life. “You can’t reverse back in time. You either take what you have or decide to do something different. In reality, if I’m here it’s because I enjoy very much what I do.

Zanardi has continued with handcycling as well, and has been trying to qualify to represent Italy at a third straight Paralympics this summer (before that event was postponed to 2021). He has inspired many around the world with what he’s done both before and after his 2001 accident. Our thoughts go out to him and his family and friends at this time.

[The Associated Press; photo via JuliusBaer.com]