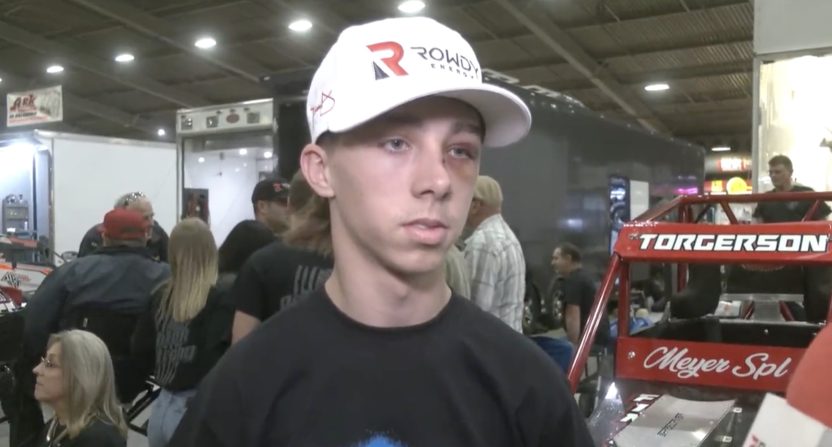 Three days after an absolutely horrible crash at the Chili Bowl Nationals resulted in him getting ejected from his race car, 16-year-old Ashton Torgerson not only survived but was able to leave the hospital and talk to media.

Ashton, and his father Danny, thanked everyone for their thoughts and prayers as well as give an update on what’s next. Sporting a black eye, Ashton said he was feeling “sore” but appreciated everyone for their concern and prayers. Danny echoed those sentiments and was thankful he could sit next to his son, telling Ashton he loved him.

👉 The best thing you’ll see today: @_Torgerson02 at the @cbnationals!

Danny Torgerson says he wasn't going to get emotional, 'but I'm sitting here next to my son, I love you.'

Ashton Torgerson is very grateful for all the support, but especially Rico and KTJ for making personal visits to the hospital. pic.twitter.com/3zwLfqoMwi

The Chili Bowl Nationals is a week-long event held in Tulsa, Oklahoma, that is regarded as the biggest midget race in the country. It attracts racers from all over the world in various forms of racing. A total of 370 drivers entered this year, including NASCAR drivers Chase Briscoe, Josh Bilicki, and Alex Bowman.

On Wednesday, Torgerson started on pole in his heat race but clipped the wall and flipped down the backstretch. That’s scary enough, but Torgerson’s head was exposed over the top of the car while flipping and hit his head on the dirt before being fully ejected from the car.

Torgerson didn’t break any bones in the crash but had a brain bleed that doctors were monitoring. When he woke up in the hospital, the first thing he asked was where he was running at the time of the crash. Torgerson then asked if his car would be ready for Saturday.

It’s unknown what happened that resulted in Torgerson getting ejected from the car but Torgerson’s dad, Danny, said Ashton’s seat belts were tight and they will figure out what happened so this doesn’t happen to anyone else. Danny added that “anyone who says they know what happened, it’s 100% speculation and guess work.”

Torgerson may not be racing in Saturday’s main event, but thankfully he will be able to race again once he recovers.