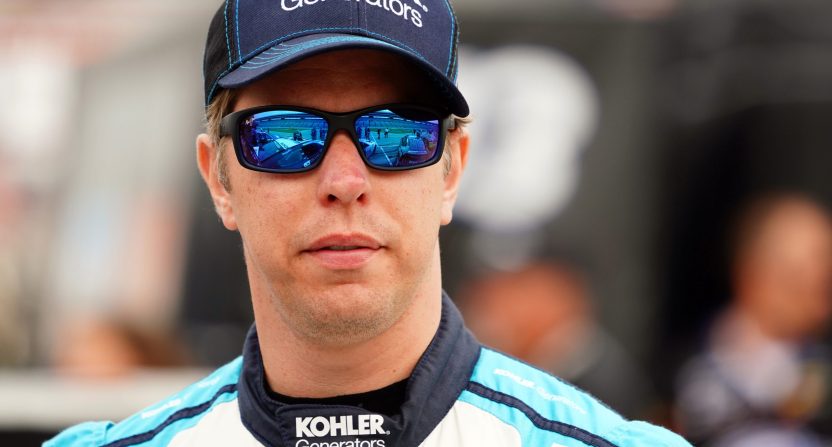 Brad Keselowski has shaped modern NASCAR more than any current full-time driver on the grid.

One of Keselowski’s earliest opportunities to shine in NASCAR came from Dale Earnhardt Jr., and he has been “paying it forward” over the last decade, giving some of the current stars opportunities when he owned Brad Keselowski Racing. The Camping World Truck Series team had guys like Ryan Blaney, Chase Briscoe, Ross Chastain, Austin Cindric, Daniel Hemric, and Tyler Reddick before they became champions and established Cup Series stars.

Now, Keselowski is taking team ownership to the next level with his partnership with Jack Roush and Fenway Sports Group. Now named “RFK Racing,” Keselowski co-owns the legendary Ford team as he and Chris Buescher look to bring the team back to its past glory.

This weekend, for Independence Day weekend, Keselowski will be driving a special red, white, and blue patriotic paint scheme at Road America. Partnering with Kohler Generators, the “Tribute to Veterans” car will have the names of 135 veterans on the race car. This is the fourth year Keselowski has done this, and it’s always special for the people who are honored as well as their families.

Keselowski spoke to The Comeback over the phone about his foundation, as well as the “Tribute to Veterans” car. We also talked about his first year as a Cup Series team owner and some of the trials and tribulations that come with the territory.

(Interview has been edited for clarity)

Phillip Bupp: This is your first season as a Cup Series team owner. How’s it been so far?

Brad Keselowski: Well, it’s a rocky road of ups and downs, and the highs are great. The lows are what you would expect. Certainly wanted to be in a better spot than we are right now and wanted to be winning races and contending week in, week out. I haven’t been able to do that to date, but we’re fighting hard to get there and I feel good that we can get there.

So we got to push really, really hard. See if we get these cars to where we can win a race before the year’s over. I feel like we’ll have a good opportunity this weekend [at Road America], a great race at Sonoma with really good cars. We seem to understand what we need to run well at those types of tracks, so this will be a good opportunity for both Chris Buescher and I. Beyond that, we got our work cut out for us. The mile-and-a-half program has been a big struggle for us, where we haven’t had our intermediate tracks where they need to be. So we’re going to push for sure there, and take that next step.

PB: What has been the toughest challenge for you as a team owner?

Keselowski: Finding the speed. We haven’t found the speed that we need on the mile-and-a-half’s. Great speed on the superspeedways. Okay on the short tracks, not anything great. Pretty good on the road courses. And so we need to get all these pieces tied in.

PB: What have you learned so far being a team owner?

Keselowski: Oh man, you’re learning something every day. I mean, some of it’s real small detail-related and some of it’s bigger-picture. But I think I’m learning a lot on the engineering front, what we need to be better there, and where the world’s going and how to keep up with it, and learning a lot of behind-the-scenes pieces about the business. Some parts are good, some parts aren’t, and that’s how they all come together.

PB: And it should be noted that you also ran a Truck Series team years ago, and you gave a lot of people the opportunity to take a step to get to where they are now. And they’re now doing big things for the sport. How does it feel to be a big part of influencing so many drivers and also the present and future of NASCAR?

Keselowski: Well, I feel fortunate to be where I’m at, and to be able to have done things that I’ve been able to do on the track, and to be able to help others along the way. I take pride in their success. I know it doesn’t come easy. They’ve all earned it, so I don’t want to take any credit for it, but it’s good to see. And I’m proud of their journey as well as mine.

Keselowski: The Checkered Flag Foundation is a 501(c)3 nonprofit charity that focuses on military men and women and first responders who’ve made great sacrifices for the community and kind of paying it back to them. I think the things I do at the track, with respect to competing on the track and having race teams and supporting different people live their dreams is a good way to give back to those in the sport.

But [the foundation] is a good way for me to give back to those outside of the sport. So I’m proud to help out a number of different initiatives and causes over the years at any given time. We got a special one this week with the “Tribute to Veterans” on my car at Road America and 135 people that are being honored who’ve given their service to our country. It’s great to honor them around Independence Day weekend, as you can imagine.

So, I’m super proud of that and the ways that we’re able to give back. And I’m glad to have partners like Kohler that will allow us to have kind of the reins on the paint scheme so we can do things like that. But it’s been really an honor to be a part of it over the years. This is my fourth year running this paint scheme. The scheme’s different every year, but the concept of the scheme remains the same with respect to supporting those men and women by putting their name on the car. I know they get a kick out of it. In the last few years, I’ve had people come up to me with the die-cast car and have me sign it because their mom or dad or brother or sister’s on there and it means the world to them. So, that’s super cool. Super cool.

PB: That’s good. Well, coming from a military family myself, my dad was in the Air Force and, yeah, it is important to me just seeing what he went through and going through now. He’s got some health issues and all that, but having people who are helping veterans and first responders, that’s very big for me personally, so it’s good that you’re doing this.

Keselowski: Thank you. Appreciate that. Thank you for his service as well.

PB: From what I understand, also, along with providing aid to individuals, a part of your foundation has to do with providing grants and partnering with other organizations that support veterans and first responders. What’s the importance of forging those relationships with other charities? And what is the selection process to determine which groups to partner with?

Keselowski: Well, we have a grant selection process, which runs through our board that I chair. So I’m glad to be a part of that. And we kind of look through the merits of any one opportunity and the requests and what we can do. We know we can’t do it all. We’re not trying to do it all. But we try to help where we can, when we can.

And so there’s a lot of grant requests that we get and a lot of grants that we’ve fulfilled and some that have moved the needle a lot, some of them not as much as we’d like. That’s okay. That’s part of the experience, but the camps to me are still… We sponsor healing camps, retreat camps. Those have been great. [We have a ] service dogs program that we do, where we get dogs to servicemen, servicewomen, PTSD dogs to help them as they transition away from the battlefield. That’s been really, really special.

We helped fund a house built by the Fisher House Foundation [located] by a veterans’ hospital, which was really cool as well. So, those are just some of the causes. We have our Veterans Recognition Program. Super, super passionate about. Love that program, where we have, I don’t know if Tina [Brad’s PR rep] told you about this one, but basically we create these kind of care packages that go to hospitals that honor veterans while they’re in hospital and receiving treatment and really in a bad spot in their life and trying to make sure that they’re being treated respectfully. So a number of causes and initiatives we’ve had over the years. And we’re proud of every one of them, and hopeful that they’re making an impact on others.

PB: That’s awesome. How can people help out and donate?

Keselowski: Yeah. CheckeredFlagFoundation.org. We have a number of different ways that people can help and whether it’s making a donation or buying some of our merchandise or whatever it may be, there’s lots of opportunities. And we appreciate the support.