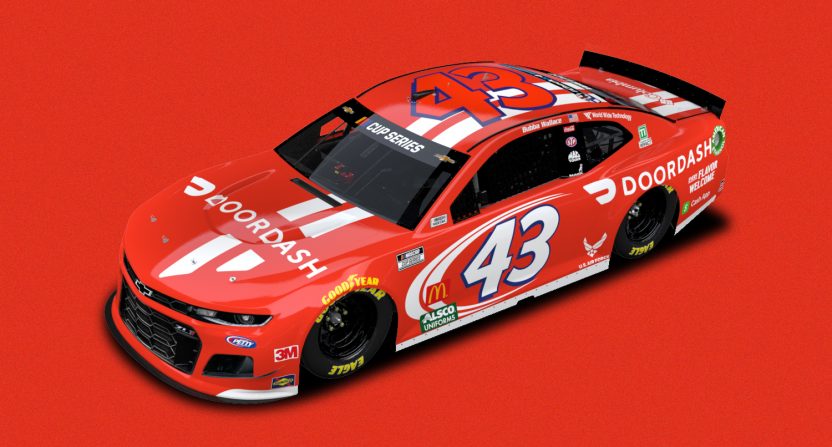 Bubba Wallace has been on a tear constantly announcing new sponsors, which is refreshing to see in a time where sponsors are cutting back or leaving NASCAR. Wallace appeared on The Today Show to announce Doordash as the latest sponsor for the legendary #43.

NASCAR driver @BubbaWallace announces his new sponsorship with @DoorDash. "They stand up for the same values that I share about unity, openness and wanting to be apart of the communities in need." pic.twitter.com/TJeKE8SMtX

Wallace announced that the Doordash deal is multi-year and will be on the car for seven races this season, starting with this weekend’s Daytona Road Course race.

This is the fourth new sponsor Wallace has had since he spoke up about racial inequality in NASCAR and within the country. On the same day that President Donald Trump tweeted that the noose found in Wallace’s garage was a “hoax” and resulted in NASCAR’s low ratings, Wallace turned the other cheek and responded by preaching love as well as a personal sponsorship from Beats by Dre. Last month, Cash App announced a multi-year deal with Richard Petty Motorsports to sponsor the car for five races this season. And then earlier this week, Columbia Sportswear announced a multi-year deal with the team and Wallace, making him a brand ambassador.

It is important to note that Wallace is a free agent in 2021 and still hasn’t agreed to returning to Richard Petty Motorsports. Clearly, with all these sponsors making multi-year deals with the team, they’re probably expecting Wallace to return but until pen meets paper and it’s official, one can never know for sure. Wallace revealed he has an offer from Chip Ganassi Racing to drive the #42 thanks to McDonald’s sponsoring both the car and the driver.

Wallace has said throughout he wants to drive for a team that can win. While the #42 has had that reputation, it’s possible that the additional sponsorship will make RPM a better team and improve with Wallace into a winner. The team has already improved, Wallace has doubled his career top 10 finishes in this season alone and he went for the win late in the first Michigan race. Wallace would also retain an ownership stake in RPM if he stays put that he wouldn’t get with Ganassi so he’ll have a decision to make in the coming weeks.