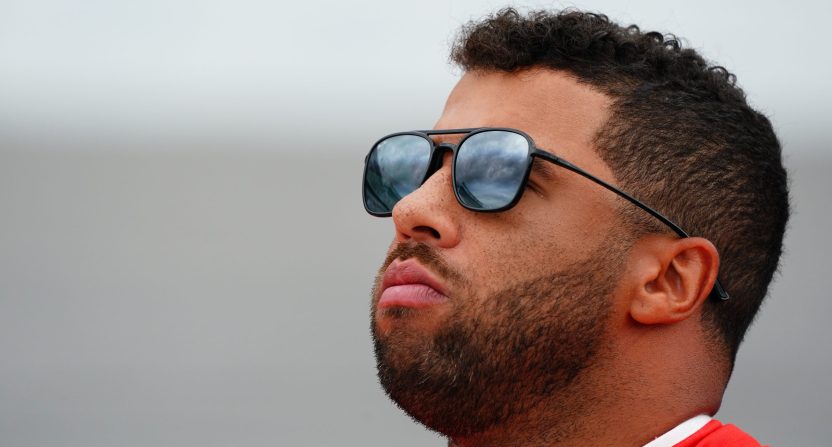 The turning point of this past Sunday’s Coke Zero Sugar 400 came on Lap 138 when a sudden rainstorm in Turn 1 caused almost the entire field to crash. NASCAR received a lot of criticism from fans and drivers about not stopping the race earlier but Bubba Wallace was more vocal about the seemingly innocuous hit he took during that wreck.

Wallace was caught up in the crash and as everyone was “along for the ride,” the spinning Wallace backed into a spinning Harrison Burton and then took a hit from behind by a spinning Ricky Stenhouse Jr. It didn’t seem like a hard hit but Wallace certainly felt it and he directed his wrath toward NASCAR over his radio about the lack of safety from the Next Gen car that debuted this season.

“NASCAR, these f**** cars suck when you get hit in the rear! Never thought I’d get the breath knocked out of me getting hit in the rear. What a f**** joke we drive.” pic.twitter.com/Kbhx7Ay7jD

Wallace said immediately after the crash, “NASCAR, these f***ing cars suck when you get hit in the rear!” And then at least a lap later, “Never thought I get the breath knocked out of me getting hit in the rear. What a f***ing joke we drive.”

Wallace isn’t the first driver to raise concerns about how the Next Gen car doesn’t absorb impacts as well as the Gen 6 car. It’s not even the first time he has suffered a hard hit in this car. At Atlanta, Wallace was caught up in a last lap crash that he said was a harder hit than the one he suffered at Pocono in 2018. For reference, at Pocono, Wallace lost his brakes on the longest straightaway in the NASCAR Cup Series and hit the wall so hard that he cracked the concrete wall on the other side of the SAFER barrier. It was a nasty looking crash but Wallace was okay.

Then at this year’s Talladega race, Wallace was in another last lap crash which he said was even harder than the Atlanta hit. The hit didn’t seem that bad but Wallace said over the radio, “I don’t know if I can take many more f***ing hits like that.”

@nascarman_rr‘s thread includes comments from Christopher Bell, Joey Logano, Kevin Harvick, Ty Gibbs, and Denny Hamlin about how they are experiencing much harder hits in crashes with the Next Gen car than they used to with the Gen 6. Wallace’s teammate Kurt Busch remains out due to suffering a concussion at Pocono last month. Busch’s hit didn’t seem like a big deal at the time, but he’s now missed six races and counting, and decided to forego his Playoff spot due to his lengthy recovery.

It remains to be seen when there will be a change to help remedy this problem the drivers are facing.