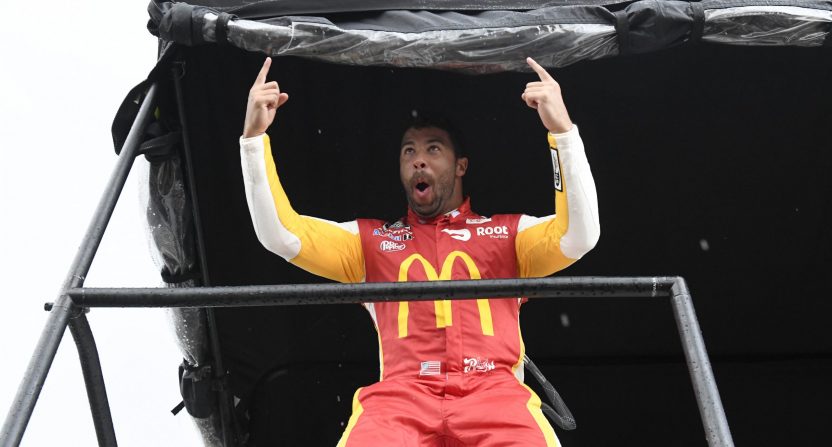 When most people meet Michael Jordan, they are starstruck. He is, however, considered the greatest basketball player of all-time and most people who meet him are a bit taken aback because of who he is. But Bubba Wallace is not most people.

Wallace said in a recent podcast interview that meeting Jordan, who along with Denny Hamiln owns the 23XI Racing team,  doesn’t give him butterflies or make him nervous like the average fan.

“I rarely ever get starstruck… I don’t know if I ever really have,” Wallace said in an interview with The Spun. “And to me, MJ’s just another guy that is passionate about what he likes to do and is competitive and we share a lot of the same core values.”

Another thing Wallace said is that he is not as intense as his boss although stories on and off the track might contradict that, Wallace says he doesn’t take work home with him.

For example, his contract negotiations.

“Everybody does things differently,” he said on the Podcast. Me, I get done with racing, do my debriefs, and then I just put it to the side.”

“We have the sim on Wednesdays but honestly, it doesn’t ring back up for me until Friday evening, Saturday morning when we’re at the track and I’m like, ‘Okay, time to put the shoes on, go get the gloves, get in the game and do it all over again,’” he continued.

“That’s as simple as that.”

Whatever Wallace is doing, is working. He won at Kansas Speedway on Sunday, Sept. 11.