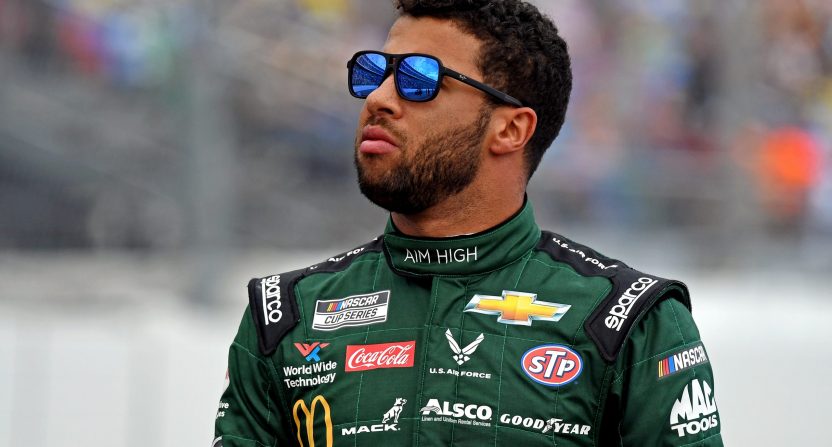 In NASCAR, there is one African American racing in the Cup Series. Bubba Wallace is in his third full-time season with Richard Petty Motorsports, and when he reached the Cup Series, he became the face of diversity in a sport that has historically lacked that.

So after George Floyd was killed (on May 25), Wallace has occasionally tweeted and retweeted other drivers’ posts on what happened and the ensuing protests over the past few days.

Wallace was on Dale Earnhardt Jr’s Dale Jr. Download to have a discussion on race and being the lone black driver and default black voice in the sport.

A new @DaleJr Download with @BubbaWallace is available now.

Wallace revealed that he sent a message to all drivers, as well as higher-ups in NASCAR via text chain.

“A few drivers, very few have given their opinion on today’s matter and I appreciate that. The silence from the top drivers from our sport is beyond frustrating.”

“All of our drivers, our sport has always had somewhat of a racist label to it. NASCAR, everybody thinks “Redneck. Confederate flag. Racist.” And I hate that. I hate that because I know NASCAR’s so much more than that.”

[I said] “Do you all not care about what’s going on in the world? That’s not the right way to go about it. [I said] Our voice carries so much more weight than Joe Schmo from down the street. [I said] We have got to do better. We have got to step up. I encourage everybody to say what they feel. [I said] This is way more important than any race win any championship that you have ever accomplished. This is something that can change on a global impact.”

A handful of white NASCAR drivers spoke out, with the first being Ty Dillon this past Sunday. Since then, other drivers have spoken out with many talking to Wallace privately to listen and figure out appropriate steps to take.

Wallace touched on NASCAR having a “racist label” and for better or worse, that label is out there. Some of the more obvious examples have been from NASCAR’s past, but there are still modern examples that could maintain that label.

Five years ago, NASCAR prevented using the Confederate flag on merchandise and offered fans the opportunity to swap that flag for an American flag, but they didn’t ban those flags and they’re still flown by fans in the infield of NASCAR races. President Donald Trump, who has responded to the protests by using tear gas on protesters for a photo-op, was grand marshal for this year’s Daytona 500. Kyle Larson was suspended and subsequently fired for saying the “N-word” during an iRacing livestream. NASCAR can make progress by having Drive for Diversity, but then get knocked back because a Drive for Diversity success story (Larson is Japanese American) used a racial slur.

The entire podcast is worth a listen. Wallace, Earnhardt, and co-host Mike Davis had a great discussion with Earnhardt and Davis listening. Wallace revealed how different members of his family had been killed by police officers, and told his own story about being pulled over and seeing cops with hands on their guns and the comments made toward him during a traffic stop.