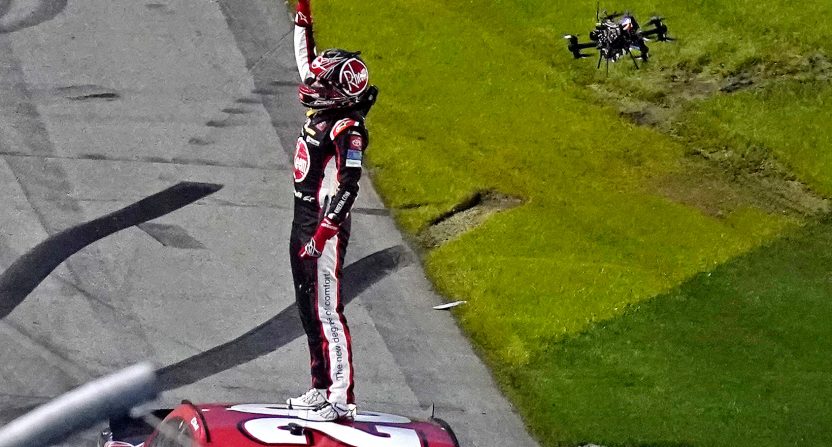 Entering his second Cup season, Bell was put in the #20 Joe Gibbs Racing Toyota and that naturally raised expectations. Being teammates with champions Kyle Busch and Martin Truex Jr., as well as three-time Daytona 500 winner Denny Hamlin, Bell knew he was going to be put to the test, but that honestly hasn’t stopped him.

Bell performed well in the Camping World Truck Series and the Xfinity Series. Often against some sort of Cup competition, Bell racked up wins in those two series. In his last full season in Trucks, Bell got five wins and the championship in 2017. Bell moved to Xfinity in 2018 and 19 and while he was unable to win the championship, he was in the Championship 4 and won 15 races in those two seasons.

Cup is a much different beast but Bell showed he was a winner before and showed us he was a winner this past Sunday. Christopher talked to The Comeback about his Daytona win, as well as dirt racing and what’s to come at Homestead. You can tune in to see if Bell can go back-to-back as the NASCAR Cup Series makes its annual stop at Homestead-Miami Speedway with the Dixie Vodka 400, Sunday at 3:30 p.m. ET on Fox.

Phillip Bupp: Just wanted to say congrats on the win, your first Cup win. How does it feel to get the Playoff talk out of the way this early?

PB: That’s great. By the end of the race, you were rapidly catching up with Joey Logano and it appeared as though it was a matter of time before you were going to get by him. Barring a late caution or unforeseen issue that always could happen, when did you know you had him beat?

Bell: I probably didn’t know I had him beat until… Well, I don’t even really know that I knew I had him beat until I got by him, because I got stuck behind the guy in second for so long that I wasn’t able to pass him. And I knew Joey was probably faster than Kurt Busch was whenever he was in second. So it was hard for me to pass Kurt, and then I was worried that I wouldn’t be able to pass Joey, but fortunately I caught him at the right part in the race track where I was able to make a move on him and get beside him, and then yeah, I was able to drive by and pull away.

PB: Does winning in the second race change your perspective and strategy for the rest of the regular season, now that you’re in the Playoffs?

Bell: I think it allows us to be more aggressive to race for more wins, whether that be fuel strategy or a tire call or something like that. Where if we hadn’t won, we would have to really be careful because we couldn’t sacrifice a good points day for a possible win. Where now, a good points day, it’s not the end all be all. We need those five bonus points, or five championship points for winning the race so that’s what we’re going to be going after.

PB: Well, speaking of that you have the Bristol Dirt Race coming up, that’s got to be on your radar in terms of a potential great chance to win.

Bell: Yeah, definitely. It’s definitely one that I’ve had circled since the very beginning. And I’ll be honest, the Daytona Road Course really wasn’t one that I had circled, but I think it just goes to show that really any of these racetracks that we go to, we have an opportunity to run well at.

PB: And because of the Bristol Dirt Race, it’s brought in some added interest from drivers like Chase Elliott, I saw he was racing at the Chili Bowl. Do you feel that having a dirt race in the Cup Series can have an effect on the dirt racing industry where maybe more big-name drivers come to race on dirt and maybe have their fans, or more fans in general, check out dirt racing either on TV or at their local dirt track?

Bell: Yeah. I mean, I think it’s always good to have a cross between dirt racing and NASCAR racing and really pavement racing in general. I think it sucks whenever you get guys that only like one form of motorsports. I think that motorsports as a whole will benefit from everybody loving everybody and everyone being a fan of everything. So the more crossover that you get definitely is a positive.

PB: That speaks true to me. I’m from the Harrisburg, Pennsylvania area and we have Williams Grove, Lincoln, Port Royal, so many great dirt tracks in the area. When’s the next time you’re heading up this way for a race?

Bell: Yeah. I’m not entirely sure at the moment, but I hope that I’m able to get up there at some point during the summer.

PB: You had good success around here.

Bell: Yeah. It’s been fun, man. Port Royal’s turned into a really nice venue. It’s one of my favorite tracks to go to. Grandview’s really fun and Lincoln as well. I’ve never been to Williams Grove, but I’d like to check that one off the list.

Proud to tears. Congrats on your first of many @CBellRacing 🏁 pic.twitter.com/vGny7WY9qV

PB: Nice. Now this is your first season in the 20, how’s the transition been? And how have things been better for you performance-wise now you’re in a Joe Gibbs Racing car?

Bell: I don’t know, man. It’s tough to pinpoint what the difference is between Joe Gibbs Racing and where I was at last year, but yeah, it’s been a dream come true to be at JGR. I’m very thankful for the opportunity to get my Cup career started last year at [Leavine Family Racing]. And yeah, hopefully I want nothing more than to end my career in the number 20 car.

PB: Like you point out with LFR. Obviously you were still with the JGR family, but in LFR you were with a single-car team. You didn’t have the kind of resources of a four-car team. Was that important for your development to kind of start out in a Cup car that was maybe mid-pack, a single car team?

Bell: I don’t think that it was important for my development to… or I don’t think it was really necessarily… I don’t think it mattered where I started my Cup career at, but definitely getting Cup experience was a big part of my success this year. It’s very difficult to move up to the Cup Series because you just don’t know what to expect. Everyone can kind of tell you what it’s about and how it’s going to go but until you experience that firsthand it’s really an unknown. So definitely getting that first year of Cup experience is very important.

PB: Yeah, it’s all about getting reps and you were getting good finishes out of that car and Matt DiBenedetto was in it the year before and finishing second at Bristol. And you had some good runs, top 5’s, top 10’s just like you said, getting reps to really show what you can do. Now you’re in the 20 and doing it even more, winning last week.

PB: Now this weekend we’re heading to Homestead. You had a top 10 there last year and it was the site of your [Camping World] Truck championship win. What’s the expectations this weekend?

Bell: I think Homestead is definitely one that we had circled on our calendar. Last year was one of my better races. And then going into this year, I think the expectations are a little bit higher. So I think I finished eighth last year. It’d be nice to build on that and possibly come out with a top 5. Maybe if we’re lucky we can compete for another win.

PB: How important is it to get Homestead locked down just in a mindset for your mile and a half program, because there’s so many of those tracks for the rest of the season?

Bell: Yeah. Homestead is a little bit unique because it’s such a low grip mile and a half. But it does relate probably more so to like Darlington. So Homestead and Darlington are kind of their own deal. And we have a couple of races at Darlington. Well, I say that, Darlington’s a different rules package this year. So Homestead is kind of a standalone racetrack from that standpoint, but we definitely want to run good. We want to run good everywhere and I think there’s really no reason why we shouldn’t be able to perform well this week.