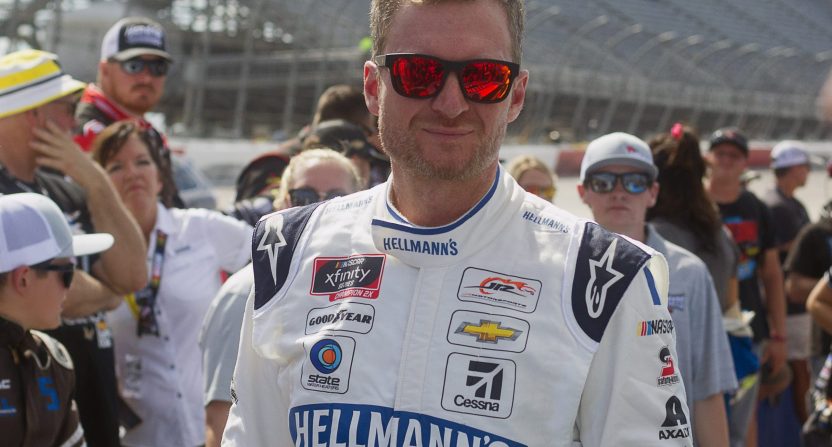 The 2021 NASCAR Hall of Fame class has been decided and one of the most popular drivers over the past 20 years leads the list. Dale Earnhardt Jr., modified legend Mike Stefanik, and original Alabama Gang member Red Farmer will take part in the 2021 class.

The NASCAR Hall of Fame altered their selection procedure this year. Since the start of the HOF, five people were inducted among a group of 20-25 nominees. Now, two people out of ten nominees are inducted under the “Modern Era” ballot while one person out of five nominees is chosen under the “Pioneer” ballot. Earnhardt and Stefanik were part of the Modern Era while Farmer as part of the Pioneer Class. Ralph Seagraves, who was instrumental in bringing in Winston as a title sponsor and so many other sponsors to NASCAR, was selected for the Landmark Award.

Dale Jr. getting into the Hall of Fame was pretty much expected. The driver, team owner, and son of a legend was literally the face of NASCAR after Dale Earnhardt died in the 2001 Daytona 500. While he last raced in the Cup Series in 2017, Earnhardt has raced one race per season in the Xfinity Series since.

Earnhardt had to retire from full-time Cup competition three years ago due to concussions but his 19-year career consisted of 26 wins, including two Daytona 500 wins. The 15-time Most Popular Driver never got to win a championship but Dale Jr. certainly left his mark on the sport and is now an analyst for NBC.

If you’re a racing fan from the Northeast, you know who Mike Stefanik is. The modified legend had a 29-year career that consisted of 74 wins in 453 starts. A seven-time modified champion, Stefanik holds the modified record for wins and championships in the Whelen Modified Series, which started in 1985. Stefanik finished one spot short on the HOF vote in 2019 and since then, Stefanik sadly lost his life in a plane crash last September at the age of 61. While he won’t be at the induction ceremony in person, Mike Stefanik’s presence will be felt throughout the modified and NASCAR community.

Red Farmer was one of the original members of “The Alabama Gang” and the 88-year-old (who might be older) still races on the short tracks of Alabama. Farmer began racing in 1953 and while he never won a Cup Series race, Farmer’s influence and knowledge helped spawn the careers of fellow Alabama Gang members Bobby Allison, Donnie Allison, Neil Bonnett, and Davey Allison. As of 2015, Farmer has had 742 career wins throughout his nine-decade career. Farmer is literally a racing lifer and is still going strong no matter how old he is.