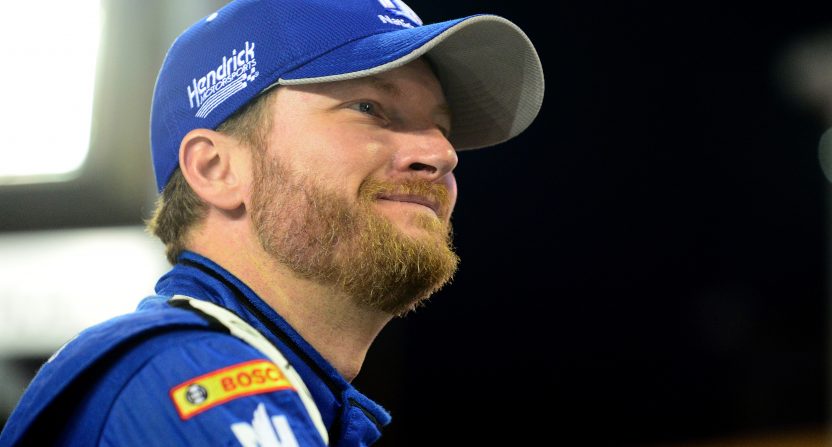 The ride-sharing service Uber has been a game changer in the transportation field for many years now. Many customers and drivers enjoy the ease of giving and receiving rides that’s all set up in mere seconds through your smartphones.

But in any ride-sharing situation, there’s always a wonder about who you’ll get as a driver – what kind of personality they have, how much awkward conversation they’ll start, etc. What is so helpful about Uber is that drivers have ratings and reviews. However, Uber is also unique in that it also can rate passengers by the pleasantness of their riding experience as well.

One Uber fan who is distressed about his passenger rating? None other than NASCAR’s most popular driver – Dale Earnhardt Jr.

Earnhardt is a big fan of the Uber service and has been using it for a few years according to his Twitter account.

Nevertheless, this weekend Dale Jr. discovered that his Uber passenger rating wasn’t quite up to a satisfactory level for his liking. He took fans along on this roller coaster ride of his Uber rating.

Unbelievably, Earnhardt says an Uber driver lied to him and gave him a negative review after promising him five stars. And he says it came after a tip! Was he a Kevin Harvick or Jimmie Johnson fan?

Just took another ride and the guy promised a 5 ⭐️

Listened to his shit about how being a Uber driver sucks. Smh https://t.co/VD0SFUNlf8

Thankfully, his Uber rating rallied and got back up closer to the 4.5 range by the end of the night. Either people were finding Earnhardt and leaving him good reviews or he just kept calling Uber after Uber after Uber to improve his rating.

Ok here’s my question – how do you not know who Dale Earnhardt Jr. is and give him a negative rating? Granted NASCAR isn’t as popular as it once was, but if there’s one guy who is well-known outside of the sport, it’s him. Not only is he all over commercials, he’s guest starred in multiple TV shows, been on countless late night shows, and pretty much everyone should know the story about how he has followed in his father’s footsteps. Plus, he’s always seemed like a congenial guy who may be in the Top 10 list of athletes who you’d want to sit down and have a conversation with.

In case you might be wondering whether or not this is a big deal, yes, people do obsess over their Uber passenger rating. The New York Post ran a story on Uber passenger ratings which had one rider say, ““I’d be lying if I said my score didn’t make me question my likability as a person.” It can’t be too much longer until we put “Uber Passenger Rating” in eHarmony profiles, right?