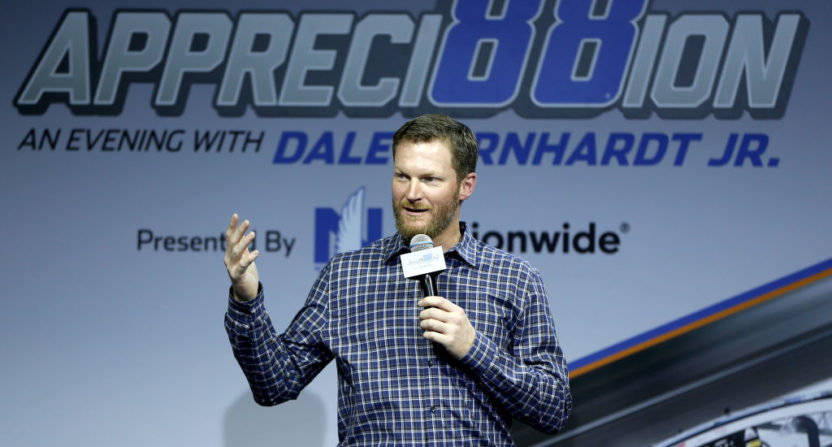 The 2001 Daytona 500 will no doubt be one of the saddest days in NASCAR history. The sport changed that day after Dale Earnhardt Sr. was killed on the last lap and things were never the same.

While he preferred to have his “Intimidator” persona out in the public, Dale Earnhardt Sr. could be a jokester and someone who could appreciate a good joke and good friend Dale Jarrett pulled a good one on him the morning Dale Sr. died.

Dale Earnhardt Jr. shared a story that Jarrett told him before filming NASCAR America on NBCSN. It involved Jarrett posing as a fan the morning of the 2001 Daytona 500 and getting Dale Sr. to sign a UPS hat.

I see @DaleJarrett at the studio for our show tonight. And he says he has something for me. I wonder what could it be. He proceeded to tell me a story to explain.

In 2001 at the Daytona 500 hours before the race DJ was getting ready to do his hospitality for his new sponsor UPS. As he exited his motorcoach (parked directly across from my fathers) he noticed dad is meeting with a group of sponsors and fans of his own.

Dad is hurriedly signing items handed to him by the group as he talks. DJ worked his way through the group up to dad and took the UPS hat off his head. He handed it to dad. Dad signs the item having yet to look up to realize whom it belonged to.

Dad stops to examine the hat after signing it because of the color and logo. The UPS branding was an unfamiliar sight. He looks up to notice DJ standing there and they both had a good laugh. DJ eventually went on his way, as did dad.

Through the years after my dads death many drivers and industry folk were incredibly supportive, and that certainly includes Dale Jarrett. Today he gave me that hat my father signed all those years ago. It’s hard to know how to express my appreciation for his friendship. pic.twitter.com/lbKK9iR44K

This is a perfect example of the close knit friendships NASCAR drivers have for each other. While they may be competitors on the track, they really are family off the track. And this story was a bright spot on an otherwise dark day.