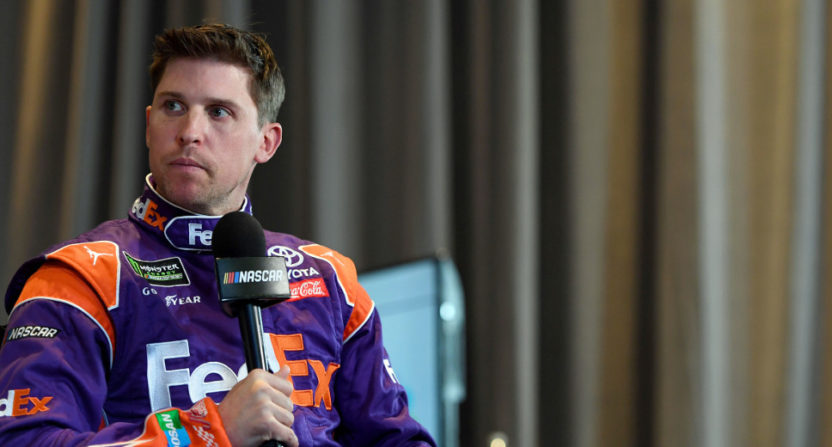 While much of the talk about performance-enhancing drugs in sports regularly revolves around steroids and other muscle-building compounds, recent years have seen a lot of focus on drugs that enhance mental performance, specifically Adderall and other medicines usually prescribed to treat issues like attention deficit disorder. There’s previously been talk about this in Major League Baseball, with almost 10 per cent of the league presenting doctor’s notes for the medication in 2014. (That fell to around eight per cent in 2017, but is still much higher than the 4.4 per cent figure of the general population estimated to have ADD), and we’ve also seen recent stories from the likes of Aubrey Huff and Nicky Delmonico about the perils of overuse and addiction.)

We’ve also seen it in football and in tennis, and now there’s a discussion about it in NASCAR thanks to Denny Hamlin’s comments to Barstool Sports podcast Pardon My Take Friday:

— Denny says wrecking Chase Elliott last year was the biggest mistake he's ever made in a car.

— The Barstool guys are anti-Logano.https://t.co/5qF3TpeyKs

Gluck later relayed a statement from NASCAR about this:

Here is a statement from @NASCAR: pic.twitter.com/MplBbmaZ69

The conversation in question comes around the 28-minute mark in the full podcast here. Here’s the clip of it:

After a discussion about urinating in Mountain Dew bottles or racing suits, the hosts ask if Hamlin gets drug tested and Hamlin responds “All the time.” Dan Katz (Big Cat) then says “Really. When it comes to concentration, I’ve always wondered about that. Do you think that there’s a significant amount of NASCAR drivers that take Adderall or some kind of ADD medicine to focus more?” Hamlin responds “Hmm. I would say yes.” Katz then says “You’ve got to put a percentage on it. It’s the old Jose Canseco rule, like 90 per cent of NASCAR drivers are do this.” Hamlin says “70 per cent.” Katz then says “Wow, that’s a headline grab,” but then moves on to asking about a feud with Joey Logano and if Hamlin is “being a beta about it.”

Hamlin appeared in front of  media at Daytona for a commercial announcement Friday, but left before taking questions, and later declined comment through a representative.

By the way, after the commercial announcement they whisked @dennyhamlin away with no chance for questions so we couldn’t ask about his @PardonMyTake comments.

Why does this matter? Well, there’s certainly an argument to be made that drugs like Adderall can improve focus and thus performance. Here are some highlights from a 2012 piece from Larry Stone in The Seattle Times about the drug and its effects on athletes:

The potential lure becomes obvious when Dr. Gary Wadler, past chairman of the World Anti-Doping Agency’s Prohibited List Committee, begins listing off the benefits of Adderall to an athlete.

“It masks fatigue, masks pain, increases arousal — like being in The Zone,” begins Wadler, currently an associate professor of medicine at Hofstra North Shore-LIJ School of Medicine, in a phone interview.

“It increases alertness, aggressiveness, attention and concentration. It improves reaction time, especially when fatigued. Some think it enhances hand-eye coordination. Some believe it increases the mental aspects of performance.”

And that might have a particular effect in NASCAR, where so much comes down to quick reactions. This is not the first time Adderall has come up in connection to racing, with one particular example coming when A.J. Allmendinger was suspended in 2012 and lost his ride after testing positive for Adderall (he claimed he was given it as an “energy pill” and didn’t know it was a banned substance); he worked his way back to the Sprint Cup Series not long after that, though.

But the “70 per cent” number Hamlin throws out here certainly created a stir. Of course, the context should be considered; this was an off-the-cuff answer in an atypical interview (most of Hamlin’s media appearances probably don’t involve questions about urination or “being a beta”), but that’s still a remark that’s going to draw a lot of attention. And it may lead to further discussion of Adderall use in NASCAR, and how many drivers have therapeutic exemptions for it.