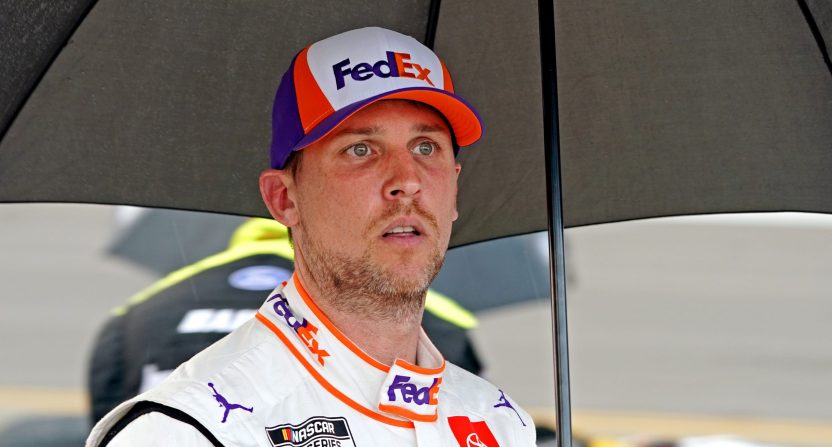 In the longest Daytona 500 ever, Denny Hamlin picked up his third ‘500 and became the fourth person to win the Great American Race in back-to-back years. But all eyes were on Ryan Newman as his #6 went straight into the wall and flipped. As of posting, Newman was sent to a local hospital and no further updates were available.

After racing the first 20 laps yesterday, rain forced the race to Monday. The 24+ hour delay didn’t cause the drivers to be restless (not yet at least). It was the usual single-file fare as all cars were stuck on the top lane just clicking off the laps.

There were a couple minor accidents. While trying to block Aric Almirola, Ricky Stenhouse Jr. turned William Byron near the end of Stage 1. And then in Stage 2, Aric Almirola was getting held up by Quin Houff that Houff got sent spinning.

Here's a look at what has ended @WilliamByron's day in the 62nd #DAYTONA500. pic.twitter.com/9wuBd1k70u

Stage 3, like just about every superspeedway race, became the typical carnage fest where it pays to be more lucky than good. Martin Truex Jr. largely got taken out of competition after hitting Chase Elliott’s gas can and Kyle Busch blew the engine but the real sparks started flying with 17 laps to go. Joey Logano had a run and shoved Almirola up into Logano’s teammate Brad Keselowski. It sounds harsh to blame Logano and it’s fair to point out he was a bit too aggressive but when it’s the end of the race, it’s time to be aggressive and that’s what happens when you’re aggressive.

With a Timmy Hill-Reed Sorenson crash in between, “Big One #2” sent the race into Overtime. This time, with everyone jockeying for position, Ross Chastain found an opening to possibly put his car into the front and get the upset. He looked like he would’ve taken the lead but Ryan Preece shut the door and then everyone crashed behind them.

Now in Overtime, a spinning of the tires by Clint Bowyer resulted in he and Michael McDowell spinning. Justin Haley, last year’s surprise summer winner, also took on damage.

On the finish, Denny Hamlin moved out in front and was well on his way to win. Seeing he probably couldn’t pass Hamlin on his own, Newman held off and Ryan Blaney pushed him past Hamlin. And then on the final stretch to the finish, Blaney got into the back of Newman and Newman went into the wall on the tri-oval. Due to the speed loss by Blaney, Hamlin caught up and edged Blaney, winning with the second closest finish in Daytona 500 history.

Here is the final lap of the Daytona 500 in which Ryan Newman's car was flipped at the line.

We will continue to keep you updated on his status as we learn more. pic.twitter.com/qkEwQBpoP0

The finish of the race was understandably subdued. The entire NASCAR community is just focused on the health of Ryan Newman and here’s hoping for good news.