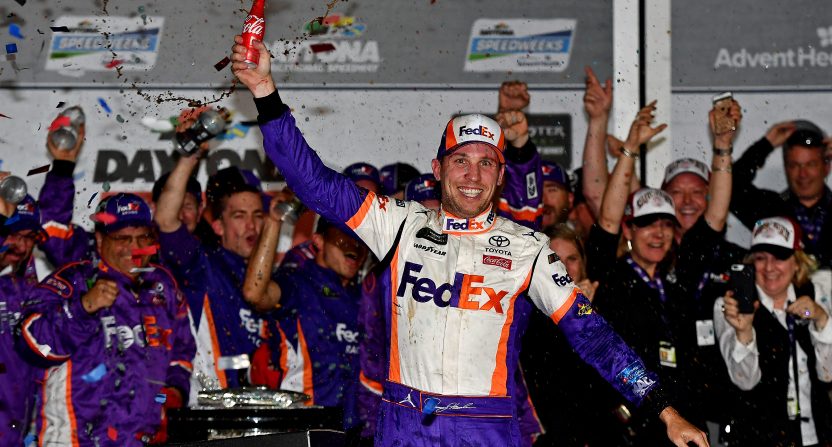 The 2019 Daytona 500 was a rather quick race but things took a turn. Once things got to less than 10 to go, everyone felt like crashing in multiple incidents. But at the end, it was Denny Hamlin avoiding everything to win his second Daytona 500, cementing a Joe Gibbs Racing 1-2-3 finish and mark a touching tribute to J.D. Gibbs, who died over the offseason due to a neurological disease. The victory broke a winless streak that kept Hamlin winless in 2018.

After witnessing the previous Cup races, in addition to yesterday’s Xfinity Series race, there was fear that the Daytona 500 would be a rather dull affair where everyone would drive on the high side of the racetrack for the first 450 or so miles. Those fears subsided rather quickly when drivers were all too willing to race each other.

The first big accident contained a few cars but it mainly affected Kurt Busch, Bubba Wallace and Jamie McMurray, who is likely to retire after this race. Replays showed Busch cut in front and was nudged by Ricky Stenhouse Jr., who claimed he never touched Busch. Stenhouse, who earned a lot of criticism for causing a few crashes at Daytona last July, may have been correct and didn’t touch Busch. It’s close but honestly, that was irrelevant. Busch making a move like that to cut in front of Stenhouse was asking for a wreck, which Busch took responsibility for over his radio.

Stage 1 went to Kyle Busch after the Toyotas and Chevrolets pit later and took four tires and passed the Fords. A similar strategy failed as Ryan Blaney held on to win Stage 2.

For Stage 3, things really got down to business. And when business picks up, the carnage increases. They held on until pit stops and then a rather bizarre crash took place with 42 to go. Teammates BJ McLeod and Cody Ware tangled trying to slow down and get into pit road. McLeod pretty much stayed away from the rest of pit road but Ware plowed into Tyler Reddick who then plowed into Jimmie Johnson while Ware went into Stenhouse. The situation was insanely bizarre and put a wrench into how we thought the rest of this race would end.

Well that was interesting. pic.twitter.com/bMzWjQGU3X

After separate spins by Kyle Larson and Brad Keselowski, it was a 10 lap shootout. After that, the “big one” finally occurred and it took out a lot of cars. After the first six or seven and maybe a couple cars tagging along behind who were able to slow down, the rest of the cars got caught up in the crash. All total, 21 cars were involved as Paul Menard hit Matt DiBenedetto, who was having a career day, a little too hard and started the crash. While Menard took blame, everyone called it a racing incident and just a consequence of restrictor plate racing.

An incredible look at that massive wreck. pic.twitter.com/JAleUEIwrd

After the red flag and everyone went back to green, a seven car wreck happened in the same spot as the previous wreck. Stenhouse went for a hole in between Kyle Larson and Kevin Harvick that evaporated just a bit too soon for him to get through and started the crash.

The final 20 or so laps became the race that could never end. On the ensuing restart with 2 to go, we got another big crash when Clint Bowyer tried to pass Michael McDowell and wasn’t yet clear, starting another crash and a second great escape from Ryan Preece, who had been getting lucky and avoiding the crashes.

RT TO CONGRATULATE DENNY HAMLIN ON HIS DAYTONA 500 WIN! pic.twitter.com/KCSDG0ewVq

With Joey Logano and Kyle Busch fighting for second, Hamlin was barely threatened for the final couple laps. While it would have been a touching tribute to J.D. no matter which Joe Gibbs Racing driver won, it was especially huge for Hamlin. J.D. Gibbs scouted and recommended Hamlin to the team and Hamlin raced with J.D.’s #11. The finish was highly emotional for the team and especially for Coach Gibbs.

What an emotional win for Joe Gibbs. Absolutely incredible. pic.twitter.com/Kcncpq5Aff

"This one is for J.D." pic.twitter.com/r5iYk4yfvi

Hamlin’s second victory in the Great American Race makes him the 11th multi-time Daytona 500 winner and the first since Dale Earnhardt Jr. in 2014. After having a 2018 season filled with struggles and losing, winning the first race in the new season, much less a race like the Daytona 500 has to feel like a huge weight was lifted. Denny Hamlin is set to take this momentum throughout the rest of the 2019 Monster Energy NASCAR Cup Series season.