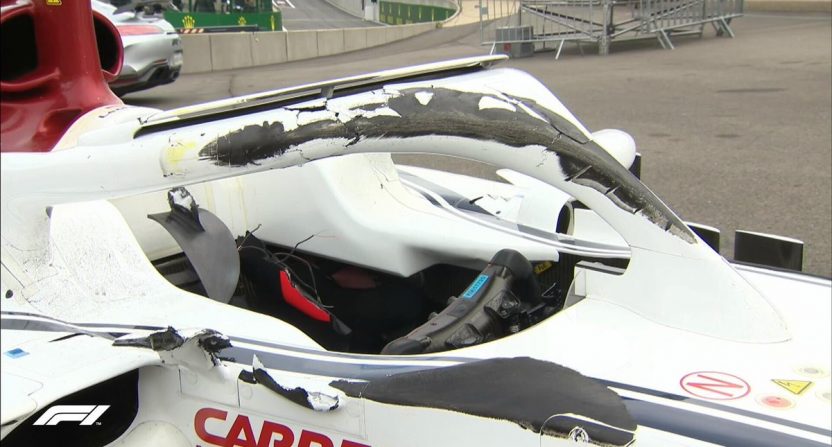 This is the first season of Formula 1’s halo system, meant to protect the driver from anything flying into the car. At the Belgian Grand Prix in Spa, Sauber driver Charles Leclerc saw first hand just how important that halo is after walking away from a bad accident.

At the start, Renault’s Nico Hulkenberg missed his braking point into the tight first corner. In doing so, he slammed into the back of McLaren’s Fernando Alonso whose car launched on Leclerc’s tire and slid over Leclerc’s head, leaving a damaged halo where the car slid over.

Despite early season tests where Formula 1 made sure the halo could withstand thousands and thousands of pounds of force, there’s no test that could really show what it can do other than actually testing it out. According to Leclerc and the rest of the grid, the halo passed the test.

Leclerc said: “I don’t know how it would have ended up without it, but looking at it, I’m happy it was there.

“I’ve been lucky on this one. Looking at the halo, it’s not looking good.”

Before the season started, the halo wasn’t exactly popular among fans and drivers even though many agreed that something needed to be done to protect a driver’s head as it’s exposed in an open cockpit. The rest of the car can be designed to be as safe as possible and protect the driver but the cockpit is most vulnerable because it is open. And it is because of that where we have witnessed most serious injuries and fatal crashes in a sport that is safer than it’s ever been.

Within the past ten years, Felipe Massa was hit in the head by a spring in 2009 and needed life saving emergency surgery to survive and make a full recovery. Jules Bianchi crashed at the Japanese Grand Prix after losing control and hitting a tractor and died after being in a coma for nine months.

In IndyCar, Justin Wilson was killed after a nose cone hit him in the head just one month after Bianchi’s death. And just last week, as Robert Wickens had his horrible crash at Pocono Raceway, lots of debris scattered all over the track, including a part hitting James Hinchcliffe in the hand (he was uninjured) and Wickens’ car flying over Ryan Hunter-Reay that came so close to hitting Hunter-Reay in the head that the car tore off the camera pod that was placed inches above Hunter-Reay’s head.

It was Bianchi’s and Wilson’s crashes that really got Formula 1 to seriously look at something that would better protect the driver. While IndyCar doesn’t have a system yet, they are testing a clear windscreen to go around the driver and leave the top open which will keep from something hitting the driver head-on.

So while the halo looks stupid, and we can make fun that it looks like an oversized flip-flop and that it makes in-car cameras look worse and we can’t see the drivers as good anymore, if the halo saves lives and it doesn’t hurt a driver’s vision and they’re able to get out of the car as fast, then there’s a method to the ugliness and I’m willing to live with the halo.