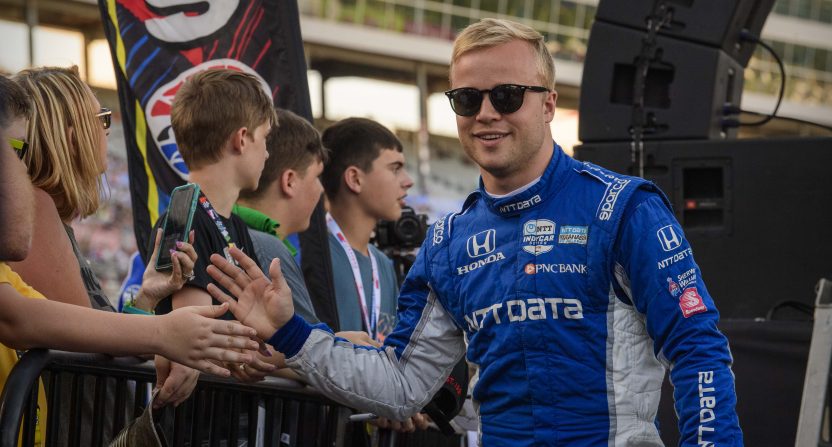 Felix Rosenqvist already has an accomplished career. A two-time Macau Grand Prix winner and a Formula 3 champion, Rosenqvist was in an established ride in Formula E. In the all-electric series, Rosenqvist won three races and finished third in the 2016-17 championship for Mahindra Racing.

About a year ago, Rosenqvist was at a crossroads. At 26, he decided to try his hand at something different and come to the NTT IndyCar Series. Chip Ganassi Racing came calling, and Rosenqvist knew that despite having to learn a lot about the series, a ride in a top team like Ganassi’s IndyCar team doesn’t happen every day. Rosenqvist took on the challenge.

“I kinda had an established role in Formula E and there was no super easy decision coming [to IndyCar], because it basically means that you start over anew,” Rosenqvist told The Comeback. “But I had a shot with Ganassi, and I’ve tested with the team back in ’16 and ’17, so it felt like it was a good foundation and a good way of getting in. “

“And I felt I was at that time, 26 years old, and it felt like it was the time. Like it’s now or never because it’s pretty difficult to come here when you’re 30 or something like that. So it’s a lot to learn, a lot to take in, and I think you need like a young approach to do it right. But yeah, everything felt right at the time. And I said, ‘Well let’s do it.’”

Being a rookie in IndyCar is difficult. It’s a series that’s unlike anything else. It’s largely spec so the competition is always close. They race on different types of street and road courses. And the biggest shift is that they race on ovals. A successful IndyCar driver must be a jack-of-all-trades on a variety of circuits. Except for a season in Indy Lights, Rosenqvist hadn’t really raced on an oval. Rosenqvist has been taught some tough lessons racing on ovals, being caught up in rough crashes at Indianapolis and Pocono. Rosenqvist has great teachers in legends Dario Franchitti and Scott Dixon, who have been helping him progress on ovals and in IndyCar.

“I think I have great help from Dario [Franchitti], from Scott [Dixon], and the whole team,” Rosenqvist said. “That they have good experience on the ovals, and they know what they know, what it’s like to teach a new driver to learn all that, but it’s still difficult. I think Texas was really hard. I think Indy turned out really well. Even if we had a crash in the end of the race that, I think it wasn’t really our fault. We just got sucked into it. But yeah, Indy was really good so that was really positive. I think Iowa and also testing and Gateway felt really good. Then yeah, Texas was a big improvement, like you need to improve for next year. So yeah, it’s been up and down, but I think a good result is around the corner for sure.”

“I think it’s always a balance of things. I think especially Dario, he’s good at calming me down when he needs to be and is good at pushing me when he needs to. And I think it’s been, it hasn’t been like a trend that I’m being too aggressive or too conservative. It’s always been like everything about ovals is a balance and, not only the car, but also mentally to be in the right balance. And the thing is always, trying to find that sweet spot.”

Even though he’s trying to learn ovals on the fly, Rosenqvist has had notable bright spots to his rookie season. In his first race, Rosenqvist was a factor for the win on the streets of St. Petersburg. Rosenqvist started in third and led 31 laps, mostly during the middle of the race, and finished fourth.

Regarding his fourth-place finish and the challenges he faced over the season: “I mean first of all, in St. Pete we had a really good run and we almost had a good lead in the race, and that kind of set off maybe a false expectation on myself,” Rosenqvist said. “I think for the team, it didn’t change. But for me, maybe I thought that my bar was high off of that. And quite quickly you get to realize you’re going to be able to learn ovals. You have to learn a bunch of really tricky tracks, and yeah it’s been very up and down. Like sometimes it clicks and it goes really well, and sometimes you have to work yourself out of a hole.”

The summer was all Rosenqvist. Something clicked and he was tearing up the road courses. A sixth at Road America, a fifth at Toronto, and a second at Mid-Ohio to teammate Dixon, Rosenqvist was getting things back on track at a time that really needed a shot to the arm.

“I think Mid-Ohio was the big gamebreaker because… like even in St. Pete where we were leading the race, we had stints where we weren’t quick enough. And we had too much tire dedregation and there’s been a couple of other races where we’ve been leading, but we just didn’t have the whole package to win the race.”

“But in Mid-Ohio we actually didn’t start in the front. We started in sixth and we were definitely the quickest on track. So I think that was big, like we did things differently and it allowed us to actually be a proper contender for the win no matter what the scenario. I think we would have been up there in Mid-Ohio. So yeah, I think that was really encouraging and there are going to be more of those races.”

At Mid-Ohio, Rosenqvist didn’t seem that worried that he was racing his teammate. Despite a win helping Dixon in the championship, Rosenqvist was trying every move he could think of to try and pass Dixon. The two even touched on the last lap, so they definitely put it all out on the line. In Rosenqvist’s mind, he knew Dixon was going to race him hard and both understood that neither wanted to do anything that resulted in a wreck.

“Yeah, I mean for sure [racing your teammate] changes some,” Rosenqvist said. “I mean, I tried to not think too much about it [at the time], because whenever you overthink things it normally doesn’t end up too well. But I mean, you can race him hard and you know that he’s going to race you hard. So actually it doesn’t really change that much. But yeah, last thing you’d want to do is take him out. A bit of caution but still pretty aggressive racing.”

One thing Rosenqvist has been able to seamlessly adapt to is American culture. Sometimes, when soccer players or race car drivers leave to go ply their trade in a different country, their performance might suffer for a variety of reasons. When a soccer player gets sold to another country, they have to adapt to a different culture — possibly a different language — and they have to take care of the things you or I have to take care of when we move somewhere else. That can affect the mentality of an athlete, worrying about where to find a place to live, while you’re training hard to play in front of the world.

Race car drivers can plan things out a bit more when they sign with another series in another country, but the same changes apply. Rosenqvist has been traveling all around the world racing in a variety of cars, so while the United States can be a bit of a culture shock, he’s adapted well to his new home.

“I spent many years of my career away from home and in different cultures like Japan, China,” Rosenqvist said. “I’ve been with Spanish teams, British teams. I think we’re pretty used to adapting to something new. But it’s definitely a different kind of environment in America. It’s, yeah, it’s not like anything else I’ve had before, but I had that year in Indy Lights where I did five, six races and I think that helped me to prepare for what’s going to be like and what kind of mentality I need to adapt to American culture.”

With just two races to go, Rosenqvist sits tenth in points and is only two points behind Santino Ferruci for top rookie honors in 2019. Rosenqvist is focused on ending 2019 on a high note, and getting to 2020 bringing in all he has learned.

“I mean, [you can carry] many things you can just straight applicate next year,” Rosenqvist said.” I think also some things you have to still adapt to. Like the tires keep changing a lot over the season and during the season. So that’s something you have to be ready for. Things are going to be a bit all over the place. But yeah, coming back to Iowa, or coming back to Texas or Indy, that’s gonna be way easier. Having done all the tracks [will make things easier] before because some tracks are really difficult to learn.”